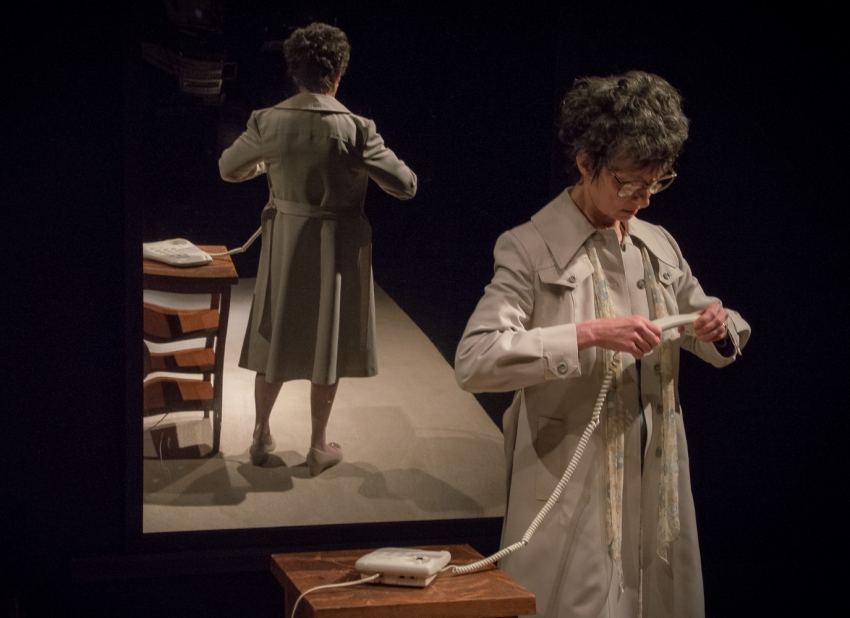 For Marcel Proust, it famously took one bite of a buttery madeleine pastry to launch us into his seven-volume novel Remembrance of Things Past.

Victoria-based actor/soundman/playwright Brian Linds does him one better in his site-specific, multi-media performance installation Reverberations. With just a bowl of stale cocktail pretzels, he manages to revivify his comatose mother for a couple of dozen Presentation House (PH) attendees at a time.

Memory – its mechanism, meaning, loss and recapture – is the core concern for Linds, as for Proust. The subject is especially poignant in Reverberations, as Linds’ mother has been in a vegetative state, lost to Alzheimer’s, for the past five years.

We meet her (played by Nicola Lipman) in her hospital bed just at the moment she miraculously resurfaces for an all-too-fleeting interlude of lucidity. And we meet her again, now portrayed by Jan Wood, as a soignée middle-aged matron just at the moment that her memory first slips its gears and she stands, baffled and afraid, before the suddenly indecipherable challenge of a ringing telephone – “What am I supposed to do with this?”

The order in which you encounter these incarnations is luck of the draw. That’s how memory works, after all, playing fast and loose with such niceties as chronology. It all depends on which of the randomized audience sub-platoons you’re assigned to as you’re ushered (through mysterious, ramshackle backstage corridors) from room to room of the Presentation House Memory Palace.

You could start in the clinically spot lit, ominously echoing hospital room where set designer Catherine Hahn lays out Lipman right at your feet. And then, as per Linds’ voiceover narration, watch the glazed eyes flicker to life and the felled form practically levitate out of the bed in wordless excitement, only to sink again into depths of dementia.

Or you could begin in an ominously silent hotel room as Wood contemplates the phone like Hamlet staring down a skull, while an oddly Australian-accented, female voice spells out a cool, third-person account of her deer-in-the-headlights confusion, paralysis and dread.

Or you might be ushered into a cozy armchair in the PH lobby and regaled with a touching account of how Linds’ angelically forbearing Mom faithfully ferried young Brian to and from a series of preteen smooch parties – no questions asked – in snowbound Saskatoon. For verisimilitude, this segment is garnished with the aforesaid pretzels, a mix-tape of Sixties pop ballads and a follow-up montage of flickering 8 mm home movie clips.

Or you could dive even deeper into the past, all the way back to the Eastern European shtetl, and then retrace the path of Linds’ immigrant father (brilliantly mimed by Victor Mariano) wending his way via Midlands England, Montreal sweatshops and World War II battlefields to the Saskatoon dance hall where he, against all odds, re-encounters his bride-to-be.

All four scenes add up to a dazzling display of director Mindy Parfitt’s theatrical versatility, from the dumbstruck stasis of the dementia tableaux to the multimedia drollery of the teeny bop bildungsroman and the graceful compression of Mariano’s decades-spanning mummery.

It’s not until the last scene – the only one in fixed sequence, rather than random order – that we get to lay eyes on Linds himself. He personally welcomes each returning audience platoon into the banked bleachers of the PH auditorium proper. There he spins for us a selection of Jewish-themed big band kitsch from the 1960’s on a classically scratchy old turntable.

When we’ve all filed in, he whips off with a flourish the white sheeted shrouds that have veiled a set of pedestal-mounted trophies he’s lined up for us. Sound geek that he is, Linds’ collection spans decades of vintage audio gear, including a clunky reel-to-reel tape deck, a stack of eight-track car tapes and a first-generation Sony cassette player.

All of these artifacts are bound up in Linds’ reminiscence of his joyous Bar Mitzvah, which he lovingly recorded on a cassette for an elder sister, unable to attend as she wa off Doing Good in far-flung Tanganyika.

We get to hear his piping Torah recitation and mini-sermon, and then the crack-up moment when his pubescent voice breaks. But then we learn that what we’re listening to is not the Original Cast Recording after all. That was lost when his sister’s Sony, Bar Mitzvah cassette and all, was burgled in Dar es Salaam.

Never mind. The tape lives so vividly in Linds’ memory that he’s pleased to imagine it retrieved from some African slag heap and somehow propelled to the Tanzanian Top of the Pops. And in this guise, with suitable DJ tropes, he replays the klezmer strains as the cast comes out for a curtain call, inviting the whole audience to join him and his miraculously reanimated parents onstage for a Bar Mitzvah dance.