Macbeth on the Beach: masterful acting, direction and design 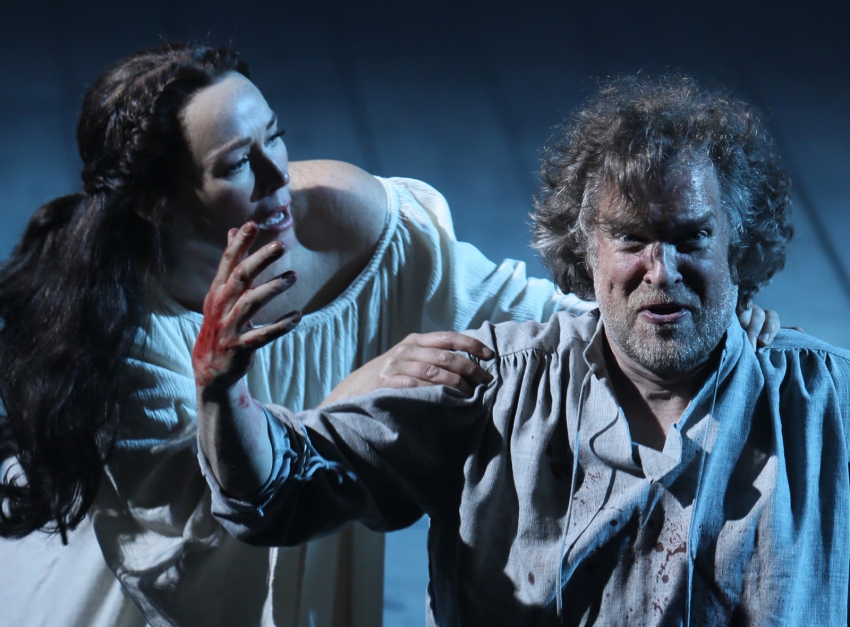 Thane and his Lady on a slippery slope. Photo: Tim Matheson

The smoke machines at Bard on the Beach (BotB) are running overtime at the semi-outdoor mainstage tent in a bid to turn the sea-glint summer sunshine of Vanier Park into the moody mists of Macbeth’s Scotland. As director Chris Abraham clues us right from the get-go, the brumes aren’t just meteorological; they’re the fog of unremitting war.

We open with a tableau of fine lords and ladies. Tricked out in costumier Christine Reimer’s lavish court dress or dashing armour, they crouch on the bare planks of set designer Pam Johnson’s quasi-Elizabethan stage, pounding obsessively on the resonant wooden floor.

No clue what the din is about, but it subsides just as abruptly as it began as the royals disperse, leaving the platform to the solitary figure of a wailing, ragged hag (Kate Besworth). She’s joined by her two other “weird sisters” (Emma Slipp and Harveen Sandhu) for their opening “hurly-burly” dithyramb.

But in this rendition, these are no otherworldly witches; rather battered, half-mad trauma casualties. Such unfortunates must have been all-too-prosaic in the chronically conflict-riddled world of the Bard’s blighted Scottish Play. Their victimhood shows in their tatters and tics, their stumbling gait.

No matter who prevails in royal succession battles, these brutalized deplorables will always be the losers. They’re king-makers only as harbingers of an anarchy that opens a path for Macbeth’s opportunistic power-grab. They foreshadow regicide not as prescient seers, but as nihilistic pot-stirrers with nothing to lose.

But, for Macbeth (Ben Carlson) and his Lady (Moya O’Connell), there’s everything to gain from the prospect that’s posed – not just a stolen kingdom, but also some balm for grief at the presumptive crib death of their only child.

Or at least director Abraham seems to think so, judging from allusions in his programme notes and his decisions to place an empty cradle on the Scene One stage and have the witches, in their coven, bandy about a swaddled baby bundle. The textual evidence for this notion may be a tad sketchy, but it’s a nice, modern touch.

In an age inclined to therapeutize everything, even grand scale public sociopathy can be decoded as just a symptom of some buried, private psychological hurt. And there are facile comparisons to be drawn between the dank halls of Castle Cawdor and our present-day corridors of power.

The Scottish Play portrays an aspiring tyrant who treasonously colludes with powers of darkness to usurp a kingdom. Alienating his reality-based entourage, he relies increasingly on fungible yes-men, henchmen and hit men, who get blown off in their turn as soon as they’ve served his purposes.

Blindsided at first by his own surprise ascension, he comes to think of his crown as his fortune-favoured due. Assured (speciously) of his own invincibility, he’s ready to pardon himself for any crime that keeps him enthroned.

He’ll hound out, banish or murder any rivals and then impute his own sins and failures to his exiled enemies. He pumps out Fake News through his heralds, while turning to duplicitous witches for his own abridged “real news” briefings.

Carlson unfolds these passions with a precision that brings out new nuance in iconic texts. When he hallucinates “a dagger of the mind” hovering over Row E of the bleachers, the whole audience shivers. His “out, out, brief candle” raised an audible sigh from the house.

O’Connell, as his Lady, has less to work with in the way of introspective perorations. But her body language projects all the tension of her triple-dealing – now swanning around like a new-fledged debutante, then dropping to a snarling, feral crouch of predation or propping up – often literally – her faltering Lord. When Macbeth recoils from the ghost of Banquo (Craig Erickson), she shows reciprocal terror – not at the leering spectre she cannot see, but at her husband’s accelerating discombobulation.

By the time she arrives at her own “out, out, damned spot” soliloquy, she has learnt to see the invisible just as vividly as Macbeth. And that insight kills her too soon to share with him the finally unravelling of their infinitely compromised reign.

Without her, his “life’s but a walking shadow.” He’s come to embraces the nihilism of the weird sisters, recognising all the “sound and fury [as] signifying nothing.”

Yet he has “forgot the taste of fears” and vows to “die with harness on our back” even after he’s been disabused of the witches’ paltering assurances. And so he hacks away against Macduff (Andrew Wheeler) until, at last – to a startled gasp from the front row patrons – his severed head is plonked on the resounding stage.

About that stage: designer Johnson envisioned it as an overt homage to Shakespeare’s original Globe Theatre. As it happens, I visited the reconstructed Globe in London just last month and can attest that the BotB version was even more effective, at least for this production.

The roughhewn planking provides acoustic as well as visual context, echoing the swagger of boots and the clangour of weaponry. The massive portals blot out the incongruous Vanier Park seascape backdrop, but channel in starkly angled rays to backlight the swirling smoke machine brumes.

A latticed mezzanine overhead, open to the sky, strikingly silhouettes some entrances and exits. A pair of stout wooden pillars frames the whole, as at the Old Globe. But at BotB they arise from chaste Doric plinths only to ramify into a tangle of truncated branches, a fitting symbol of the play’s murky, shape-shifting milieu.

On such a stage the final thud of that waxwork head in the last scene proves far more resonant than the anodyne victory speech of Macbeth’s (historically short-lived) successor.

And, before the new king even finishes his trite valediction, the assembled lords are already thumping their sword hilts on the planks, just as in Scene One. So the beat goes on and the fog of war rolls back in.