Homophobia takes a hit in Broadway Across Canada roadshow 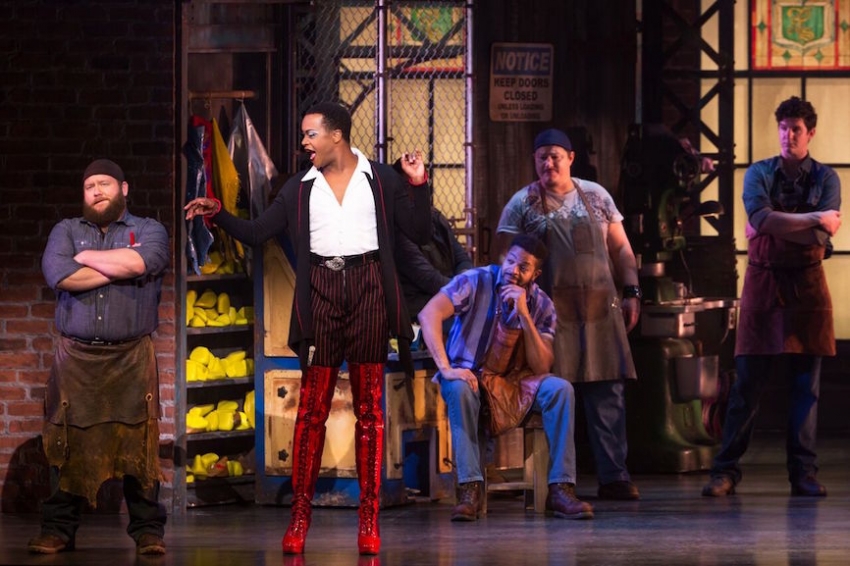 One of these days these boots are gonna walk all over yew. Photo: Matthew Murphy

Broadway has not been kind to U.S. popular vote loser Donald Trump and his team. When his hand-picked running mate, flyover governor Mike Pence, tried to take in some Big Apple theatre, he found himself hectored from the stage by the cast of the long-running smash hit Hamilton.

Pence – Trump’s points man to appease the G.O.P. base on two key missions, gay-bashing and job creation – might have done better to take in a different musical: the Tony Award-winning Kinky Boots. The show’s touring version is dazzling packed-house audiences this week at our own QE Theatre.

From Kinky Boots, Pence could have learned a thing or two about how to turnaround a rust-belt factory and save its blue-collar jobs. Instead of swingeing tax-giveaways to bazillionaires, why not try a recipe that’s far simpler, cheaper, faster, kinder and more fun? Just call in the drag queens.

The prescription even has a real-world track record of sorts. It’s based (loosely) on a 1999 BBC documentary that related the true story of an English midlands shoe factory whose high-end blucher product line got edged out by cheap foreign competition. To stave off bankruptcy, the century-old business switched over to the “niche market” of fetish footwear for cross-dressing men.

To tell this tale, playwright Harvey Fierstein and composer/lyricist Cyndi Lauper teach us way more than we ever thought we’d need to know about the economics and architectonics of stiletto heels for studly male physiques. It’s probably the most exhaustive musical theatre examination of labour relations in the assembly line wearable sector since 1955’s Tony-winning Pyjama Game.

But that’s not what’s sustained Kinky Boots in New York for over six years now and packed provincial venues for the Broadway Across Canada roadshow. Rather it’s the glorious glitz of drag diva Lola (J. Harrison Ghee), a made-up character spliced into the documentary story. He’s supported by a quintet of statuesque cross-dressing kewpies who, for sheer verve and technical finesse, handily match such recent Vancouver visitors as the Ballets Trock.

Ghee, as the cynosure star of the show, goes way beyond sequinned vamping. He can act, movingly, whether in or out of drag, and he sings torch songs or ballads as well as raucous Motown-style anthems. He can even hold his own, credibly enough, in a boxing ring.

Ghee’s multifaceted talent is backed up by more than three dozen supporting actors and a nine-member live orchestra. The roadshow has recruited a bevy of top tier technical designers – David Rockwell for sets, Gregg Barnes for costumes, Josh Marquette for flamboyant hairstyles and Randy Mercer for outrageous make-up.

I happened to be crossing Georgia Street as the Kinky Boots truck convoy hove into the QE backstage; it was like watching a circus coming to town.

Ringmaster of the whole lavish production is director Jerry Mitchell, who also doubles as choreographer. He loads the scene with witty touches that make maximum use of the factory paraphernalia – conveyor belts, compression hoses, parapets and gangways – as props for everything from chorus extravaganzas to fleeting glimpses of introspection.

Mistress of these momentary musings was Rose Hemingway as the factory owner’s late-blooming love interest. She brings to her character a delicately funny poignancy that is hard to achieve in such a splashy musical context. Aaron Walpole also delivers a standout performance as a burly shop-floor Yob who manages to outgrow his allergy to “poofters” and rally the team for a last-gasp production push.

Less affecting, to my taste, is Curt Hansen as the young heir to the factory. Part of the problem might be the music assigned to him in Lauper’s score. Somehow he wound up with more than his share of braying confessional ballads.

But you can’t help cheering for him and the whole Kinky Boots crew as when they manage to snatch victory from the jaws of foreclosure with their generously inclusive niche marketing ploy.

Which turns out, alas, to be a matter of alternative factuality. In real life, as it happened, the shoe factory of the original documentary closed two years after venturing into fetish footwear. It was their American investors that pulled the plug on them.

And then they came for me...