Keating turns our notions of crime and punishment "Inside/Out" 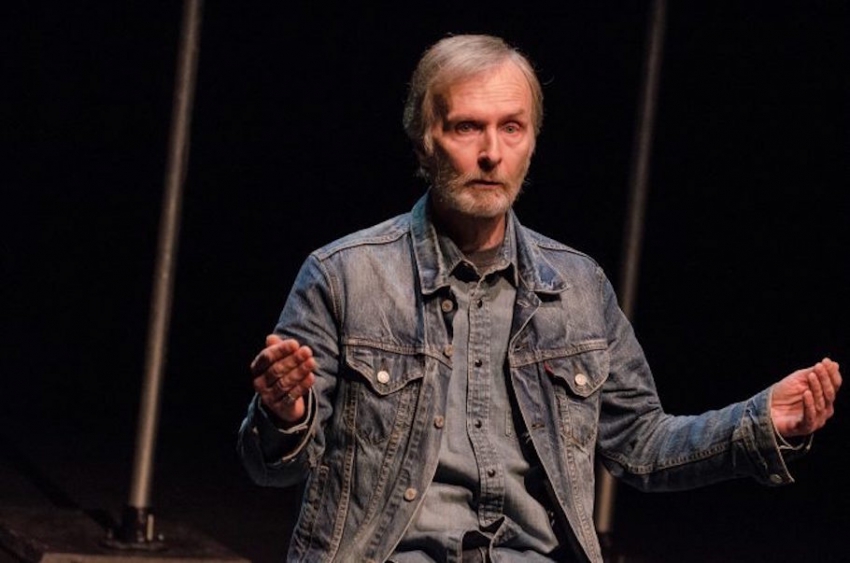 Patrick Keating, whose 80-minute monologue is packing in PuSH crowds this week at Granville Island’s Performance Works, has been in and out of prisons – mostly in – ever since he was 16.

I can’t make out, just by looking at him, how many years that adds up to, since his age is hard to gauge by sight. On the one hand, there’s the lank mop of grey hair and the grizzled white stubble. But, then again, in his onstage uniform of denim fatigues, he’s lean and spry as a ferret, with trim, white, businesslike dentition to match.

Not that he shows his teeth a lot. His thin-lipped, bony face rarely grins – an instinct he cultivated in “the joint,” he explains, where you hoard your feelings inside as a precious commodity to be dispensed only sparingly. But when he does open up with a smile, he flashes the deep dimples and twinkling eyes of an Irish charmer and born storyteller.

The face is taut, scrubbed, almost shiny, although subtly lined, etched with a life experience quite alien – almost indecipherable – to most of us “outsiders.” The closest comparison, at least in my limited acquaintance, might be the faces of elder priests who might have already retired or even left holy orders.

The analogy isn’t all that far-fetched. Like priests, long-term prison inmates live lives of ritual and routine. Segregated from society-at-large and barred from commonplace familial intimacies, they endure long stretches of solitude and boredom, punctuated by humdrum interactions with their cloistered inmate brethren that take on outsized resonance.

These encounters can all-too-readily turn violent; prisons are pressure cookers full of career criminals, after all. Keating doesn’t spare us the tales of beatings, rapes or shakedowns. But he also regales us with accounts of loyal friendships, even tender liaisons, and a kind of rough chivalry. Not to mention some uproariously funny riffs on the innate surrealism of life behind bars. Bottom line: prisoners are as human and varied as anybody else.

With impeccable pacing and masterful mimicry, Keating’s solo performance evokes a multi-ethnic and multi-lingual cast of characters (most of the action is set in Québec), all without benefit of any costumes or props apart from a single chair that he totes around the stage to follow lighting designer Jaylene Pratt’s spots. No music, either, for the whole 80 minutes; sound designer Noah Drew only offers us the occasional clank of leg irons or the slam of iron doors.

The only “set,” if you can call it that, is a row of floor-to-ceiling galvanised pipes at the back of the stage. They serve, functionally, as light stanchions, but strongly suggest prison bars, placing the audience on the same side of the grating as Keating.

So which side is that? Are we inside or out? Well, in the course of the monologue he smoothly initiates us into a lot of the folkways and jargon of incarceration. We even get to share an inmate’s-eye view of various cops – the gratuitously sadistic arresting officer who coolly shoots an unarmed escape-car driver in his “pedal foot,” the clueless “horsemen” (RCMP) who escort a shackled Keating on a prisoner transfer flight from Québec, only to hand him over to the unnervingly touchy-feely “bulls” of B.C.

He soon got used to the B.C. “bulls,” however, with their relative openness to rehabilitation initiatives. Within a year, he was even attending a U-Vic Extension drama workshop behind bars. He became so committed to the course’s graduation project, a staging of Alfred Jarry’s Ubu Roi, that he opted to postpone his parole until after his dramatic debut on the prison stage.

There have been relapses into crime and drugs. Even since Ubu Roi, he’s been re-arrested and sentenced to six more years “inside.” But now he’s out for good, he says.

Decades in prison taught him the discipline of carefully curated self-presentation. Now theatre allows him to take it “outside,” to edify and enrich the rest of us.