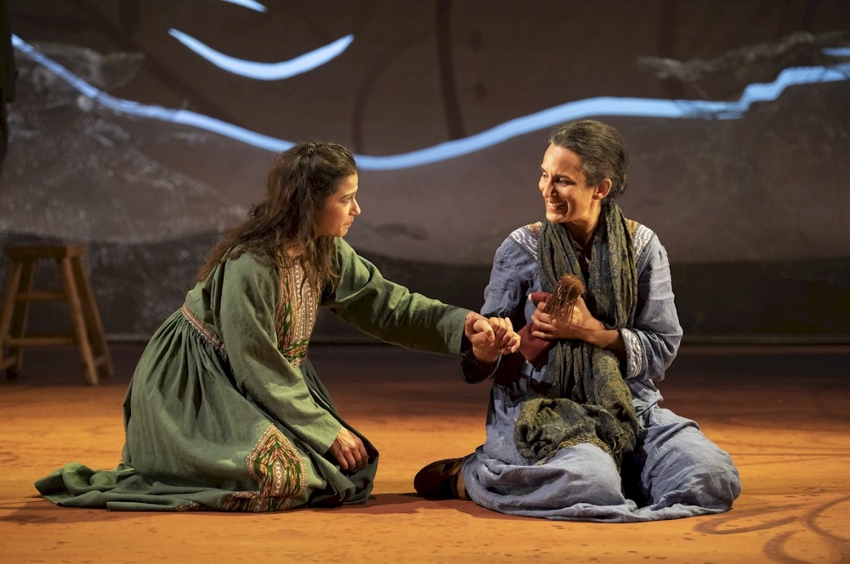 After 30+ years of luridly graphic media coverage, it’s all to easy to grow numb to the staggering human cost and fiendish complexity of the Afghan tragedy. To restore our focus, it just might take a highly formalistic, claustrophobic parable like the Arts Club’s stage adaptation of Khaled Hosseini’s best-selling 2007 novel A Thousand Splendid Suns.

Ursula Rani Sarma’s script glosses over none of the shelling and shouting, the brutality and beatings, the cynicism and corruption of Afghanistan’s endless war. But it conveys these realities with a spare, stylized compression that only heightens the impact, almost like a Japanese Noh play.

Not that there’s anything ascetic or “Zen” about this production. Calgary-based director Haysam Kadri makes full use of lush stagecraft, including David Coulter’s haunting musical score (with such instrumental exotica as a didgeridoo and a musical saw), choreographer Stephen Buescher’s meticulous deployment of the dozen-member cast, or lighting designer Robert Wierzel’s rich palette of intense spots and cyclorama silhouettes.

Set designer Ken MacDonald provides an ingenious clockwork of scrolling backdrops, see-through architectural elements, minimal roll-away props (a table, bedstead, cupboard and a few chairs) and scenic “flies.” Scene-changes are fluidly executed in real-time onstage by the players themselves, shifting seamlessly from indoors to outdoors, across spans of geography and decades of time.

Many of these production elements came pre-tested from San Francisco’s American Conservatory Theatre, which (along with Theatre Calgary) commissioned the work for its 2017 premiere. But for this new production – the seventh staging of Sarma’s script – what’s wholly original is the inspired casting, drawing heavily on Arts Club alumni.

The plot turns upon the central axis of co-stars Deena Aziz and Anita Majumdar, well-known to veteran Vancouver theatre goers from Arts Club’s Bombay Black. In that 2008 hit, Aziz played a scheming procuress who turns her hapless daughter, Majumdar, into an instrument of grisly revenge. Here, again, they play a kind of mother-daughter pair, but with entirely different affective valences. For one thing, their filial relationship is by choice, rather than by blood.

In fact, they are co-wives (although a generation apart in age) to an abusive loser (Anousha Alamiah) who has clawed the younger woman out of the rubble after she’s been freshly orphaned in a rocket attack. Desperate (and secretly pregnant by a lover she believes to be dead), the girl lets herself be duped into marriage.

The co-wives get off to a rocky start, with the childless older woman resenting the younger as an interloper. But, in the pressure cooker of their luckless household, amidst the accelerating civil war and Taliban theocracy, they forge a bond after the birth of a daughter and, eventually, a son. The junior wife rallies an unsuspected ferocity in defense of the senior, who in turn taps into long-buried wellsprings of motherly nurturing towards her co-wife and the growing children.

As the relationship flourishes, we’re treated to flashbacks of how two such different women – the one a rural pariah, the other an urban bluestocking – could grow to mutual respect. The ghostly, suicidal figure (Arggy Jenati) of the senior wife’s village outcast mother weaves through the scenes murmuring counsels of hopeless despair. Nevertheless, the two women plot their getaway, try and fail, until – pushed to the brink – they finally manage an escape that’s at once appalling and uplifting.

Spanning decades, the story line demands vast expressive range from its co-stars – from girlish hope to post-traumatic stress, encysted defensiveness to vulnerable love. They each rise to the challenges and play brilliantly off one another’s strengths, growing in character and creating a palpable bond. Even Alamian, as the tormenting husband, shows flashes of twisted altruism and “honour” to justify his vicious misogyny. Nevertheless, the opening night crowd cheered like a bunch of hockey yobs at his violent comeuppance.

So where, amidst all this brutality, are the “Thousand Splendid Suns” of the title? Easy to miss it, but Sarma tips us off to them right in the opening scene. Just before the cataclysmic rocket blast, Majumdar’s poetry-spouting father (Monish Sharma), in a fond farewell to his beloved books, recites a lyric by the 17th century ghazal master Saeb-e-Tabrizi praising “arid” Kabul, whose “gusts of powdered soil, slightly sting my eyes/But I love her, for knowing and loving are born of this same dust.” Behind its walls, where the women are sequestered, the city “hides a thousand splendid suns.”

This play takes us behind one wall to glimpse one such sunrise of knowing and loving. Splendid!