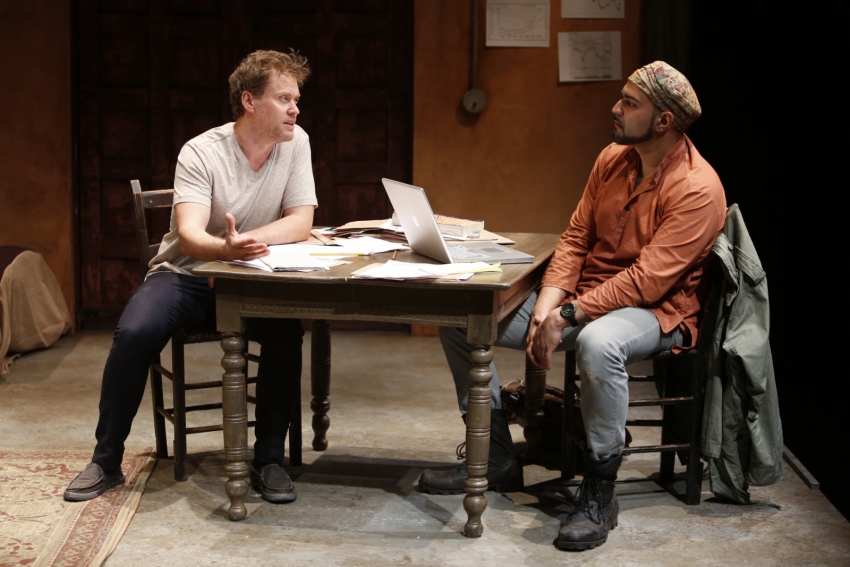 Banker and captor get down to fundamentals. Photo: Tim Matheson

All the elements – the acting, staging, lighting and music – come together to make Pi Theatre’s latest offering, The Invisible Hand, an adrenalin-charged thriller that will glue you to the edge of your velvet-plush chair in The Cultch’s Historic Theatre, where it runs (on its Canadian premiere) through April 23rd.

Start with Craig Erikson as an Ivy League banker held hostage by a splinter faction of Pakistani jihadis. We watch him portray, with haunting credibility, a gamut of emotions from smug condescension to escape-artist guile to abject terror to Stockholm syndrome bonhomie to numb resignation.

He is, I’m convinced, the title character in the play: “invisible” in that he’s continually sequestered in secret hideouts. Yet he’s determined to use his screen-trading expertise and his unswerving faith in market dynamics to earn his own ransom money by training his captors in screen-trading jiggery-pokery. In the process he unwittingly becomes the “hand” that undoes his captors and himself, along with plenty of “collateral” victims.

Vancouver’s own Munish Sharma lays on a very convincing cockney accent to play a London-born street kid who morphs, under the banker’s tutelage, from a thuggish torturer into natural-born Gordon Gekko with a firm grasp of the value of “insider information.” Commanding obedient jihadi minions, he’s uniquely positioned to create his own ground realities and profit handsomely from his “insider” foreknowledge thereof.

Thus bankrolled, he can proclaim himself the new Imam of the jihadi cult, deposing his own erstwhile religious mentor (played by Shaker Paleja with just the right blend of sanctimony, world-weary disillusionment, simmering grievance and philosophic acuteness). The “invisible hand” of unbridled money power pushes even wavering acolytes, as typified by the banker’s sad-sack jailer (Conor Wylie), to buy into the new leadership.

Scenarist David Roberts has produced a wonderfully apt stage set of nested walls within walls to evoke the banker’s complete sequestration. Peeling away barriers one by one, we’re still left with the sense that none of these characters can ever really “break free” of their physical and psychological enclosures.

Lighting designer Alan Brodie ingeniously uses these blank walls as a screen to project a lurid orange glow at the end of each scene. Against this backdrop the actors freeze in tense silhouette before a complete fade-out to reposition the cast for the next round of action. Composer Gordon Grdina bridges the gaps between scenes with an emotionally pitch-perfect score that draws heavily on classical motifs from Arabia and Pakistan’s Balochistan province.