Outsourced work ethic in "Foxconn Frequency #3" -- how far can you PuSh a keyboardist? 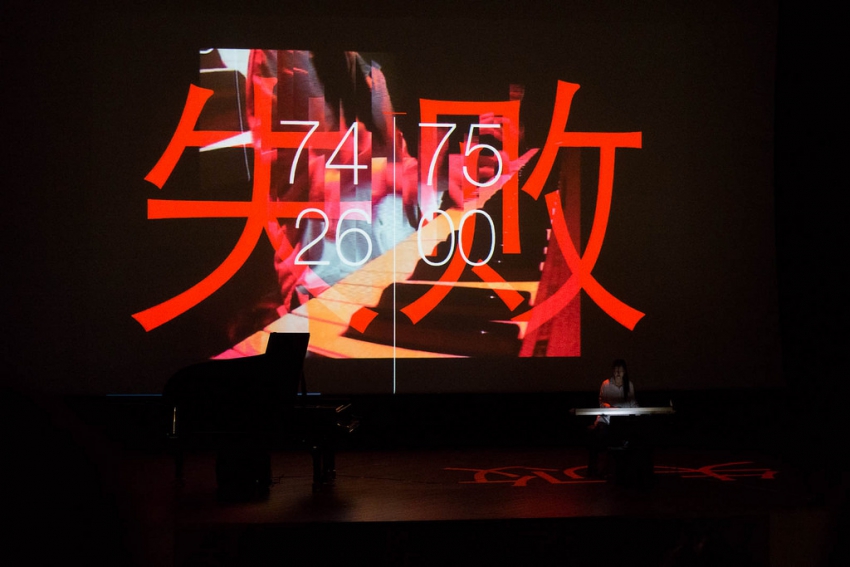 Another one bites the dust! Image: brainfloat

Another world-premiere from Vancouver’s own multimedia enfants terribles, Hong Kong Exile. This time, according to the PuSh-Fest programme, it’s a keyboard farrago “for three visibly Chinese performers.

Quite visibly. Not only their faces and body language; even their clothes proclaim their ethnicity. HK Exile co-founder Natalie Gan, concert virtuoso Vicky Chow and 13-year-old tyro Andrei Koo file onto the Performance Works stage in ambivalent mufti of white, high-collar tunics and black slacks.

They each take a seat behind one of the three Midi keyboards arrayed on stage. Granted, there’s a lot of mysterious paraphernalia surrounding them: computer screens, webcams, 3-D printers. But the core of each layout is a recognizable span of 88 black-and-white keys. So it seems reasonable, when they touch their consoles, to expect some sort of music to peal forth.

Instead, you’re blasted with a stream of clanks, whirrs, wheezes and roars, all echoing in what sounds like a cavernous loft space.  Wisps of stage smoke snake in from the wings, suggesting the hydraulic seethe of a modern mega-factory.

Brace yourself, then, for an 80-minute, uninterrupted, real-time immersion into the industrial hell of Foxconn Frequency.

Foxconn could be the biggest tech giant you’ve never heard of. Chances are you’ve got something right now concealed about your person – your tablet, your watch, your cellphone, maybe your pacemaker – that comes out of its 3 km2 “campus” in Shenzhen, China’s archetypal export-oriented “Special Economic Zone” just across the border from Hong Kong.

Maybe you’re reading this on a Foxconn screen. But you’d hardly know it from the label. Rather, Foxconn’s products are manufactured under license and bear the proud logos of consumer electronics’ most lustrous brands. Foxconn wins those contracts through low-ball bidding.

To undercut all rivals, it mercilessly drives its 1.3 million workforce to achieve super-human productivity levels on assembly line tasks of sub-human tedium. The attrition rate is high, but Foxconn draws on an inexhaustible reservoir of fungible young recruits from China’s poor, rural hinterland.

The lure is the promise of overtime – as much as $2.50/hr., princely by Chinese standards. But it’s piecework pay on a team basis, forcing the workers to both compete against and rely upon each other. Unmet targets mean docked wages.

And even overachievers have no time to personally enjoy the fruits of their labours before they’re thrown a new and equally arbitrary challenge. The most they can hope for is to remit some money back to the starveling old folks left behind in the boondocks – the dues of Confucian “filial piety.” Which is, after all, why many on the assembly line have indentured themselves to Foxconn in the first place.

If they peel off a riff on time, a white spotlight beams down on them and the Chinese ideogram “Success” is emblazoned on a cyclorama behind them. If they overshoot the allotted nanoseconds, they get a red flare and a screen flash of “Failure.” Onscreen graphs plot their keystrokes in white against an unforgiving red timeline.