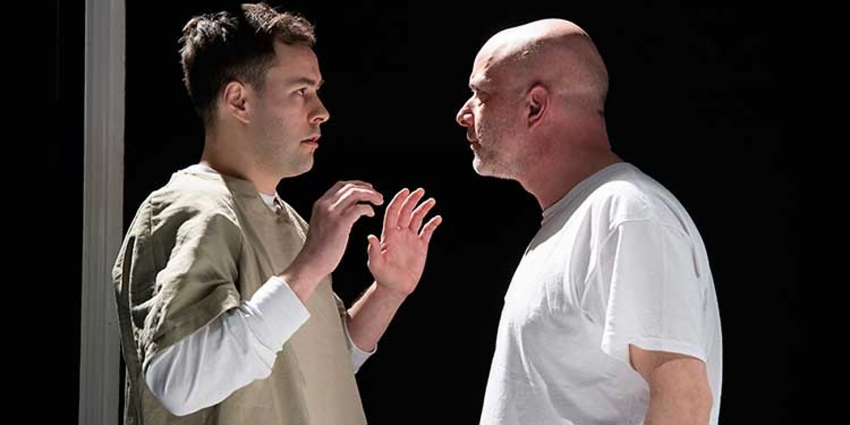 In a show-stealing performance, we follow her, through recited diary entries, as she morphs over the next 20 years into a traumatized rape victim, a feminist grief counselor and, finally, a challenging guardian angel in a hellish penitentiary.

But, until the very last scene, Abby never actually steps into the stark prison cell that producer/set designer Markian Tarasiuk has placed at the center of the Gateway’s black-box Studio, where his SpeakEasy Theatre is staging the script’s world premiere. Rather she circles around the edges of the Studio's theatre-in-the-round layout.

There, in the shadowy penumbra of lighting designer JillianWhite’s glaring illumination, we first encounter her gushing on about such teenage muddles as her mix-up of the words “ravishing” and “ravenous.”

So she plonks herself down next to her heart-throb “crush” and proclaims herself “ravishing” when she’s merely feeling peckish. The mistake gets her literally ravished – raped – which sets in motion the play’s 20-year arc of brutality.

But there’s another word between “ravenous” and “ravishing” which aptly sums up both the force and the flaws of Gross Misconduct. It’s ravenning, with all its connotations of erratic, all-over-the-map violence.

The sense of foreboding never lets up, but neither does it ever quite click into focus.  We find we can’t look away, but at the end we wonder if we’ve been held by high tragedy, prurient voyeurism or a #MeToo preachment?

Brilliant stagecraft and pitch-perfect performances and director Kayvon Khoshkam’s impeccable blocking and timing elide over any such questions for the whole 80-minute, intermission-free duration of the play. We punch in and out of scenes with a buzz or a clang or a flick of a switch from semi-darkness to blazing light. Florescent tubes stake out the boundaries of the cell, flickering on and off like frayed synapses.

Audience disorientation may be not a bug but a feature of this production. From the moment we file into the Studio (in a color-coded aircraft-boarding-style admissions process), we get a faint inkling of what it might be like to be a fish-out-of-water newly incarcerated inmate (or simply a “fish,” in prison jargon). The dialogue (except for Abby’s reminiscences) is conducted mostly in such jargon, or in tight-wound silences or arcane hockey-speak – all alienating dialects for those (like me) not native to them.

The jargon is apportioned between a jocund sadist of a guard (Scott Bellis) and a preppy “fish” (Mike Gill) thrown into the cell on a rape charge until his rich daddy manages to get him out on appeal. The silences belong to a brooding lifer (Ian Butcher) who’s had the cell to himself for decades until he’s suddenly – and mysteriously – lumbered with a cellmate by the prison powers-that-be. And the hockey talk becomes the emollient that defuses the inevitable flare-ups and eventually create a tenuous bond between the two cellmates.

All four performances shine. Bellis epitomizes the jovial banality of evil. Gill’s prolix swagger caves so fast and so utterly before prison brutalities that he almost earns a scintilla of sympathy from the audience – and his cellmate – and even a shred of respect when he trumps his corrupt jailer. Butcher smoulders in the anaerobic flue of his solitude until Malani’s soliloquies (delivered as entries from a diary that’s been smuggled into the jail) finally ventilate his smothered soul.

The karmic connections between these four characters drive Gardiner’s tale. It’s expounded as much in explosive physical theatre as in verbal eloquence. The wordy script abounds in fine writing, but much of it is lost in the staccato, stoic jailhouse delivery or in the omnidirectional theatre-in-the-round declamation. The story also hinges on a set of coincidences that can be hard to credit or even just to follow.

But there’s no need to catch every word or plot twist. Without succumbing to off-the-headlines topicality, the play grippingly poses ever-pertinent questions: in life-shattering crimes like rape or murder, is there even a possibility of due justice? Or redemption? And can those two hopes ever reconciled?

Much to its credit, Gross Misconduct leaves us without any pat answers.