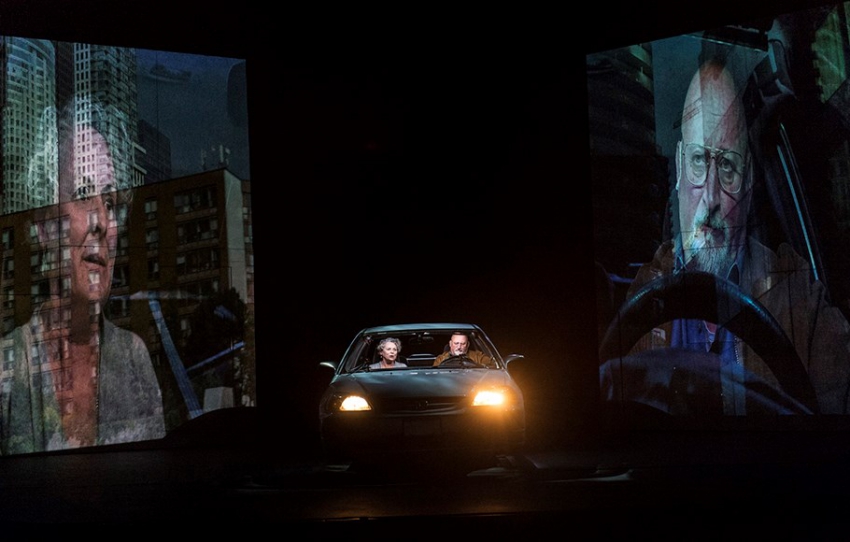 Driving each other way past crazy. Photo: Don Lee

Now rounding on its third decade, Vancouver’s innovative Electric Company theatre collective returns to its once-and-(hopefully)-future home base, the Vancouver Playhouse, for the world premiere of Canadian polymath Daniel Brooks’ newest and, arguably, most ambitious work to date.

But director Kim Collier, an Electric Company co-founder, persuaded him that, as an urgent allegory of our “precarious times,” The Full Light of Day could gain extra immediacy as a hybrid mix of film, photo-collage, live action, simulcast real-time close-up projections, pre-recorded dialogue and elaborately choreographed scene-shifts.

Yet, unless you come to the Playhouse lobby early enough to sample dramaturg (another Electric Company co-founder) Kevin Kerr’s virtual reality glosses on the play’s protagonists, there’s nothing to prepare you for the wild ride ahead. Rather, you file into the auditorium to the lulling strains of Chopin nocturnes and the placid image of a spreading oak tree across the proscenium scrim.

It takes a moment to register that the scene is “alive,” with gently doffing foliage and a background track of ambient birdcalls. But there’s a lot of high-end technology behind such apparently seamless simplicity.

We came for the final preview, one night into the show’s January 7-12 run, so many of the production’s techies were still there for last-minute tweaks – photo director Brian Johnson, lighting designer Michael Walton, composer Peter Allen, sound designer Brian Linds and technical director Craig Alfredson, among others. They filled up the last two rows of the house with over a dozen computer screens.

All this processing power comes into play as soon as the house lights dim, the scrim fades and the nested boxes of designer Julie Fox’s stage set first shine through. We’re immersed in the country house milieu of our protagonists: Harold (Jim Mezon), a hard-charging condo developer, and Mary (Gabrielle Rose) his adored and pampered trophy bride of many years standing.

Yet even as the onstage live action admits us voyeuristically into their private lives – their very boudoir – we also, through the wizardry of cyclorama projection, get to experience the world subjectively through their eyes, right down to the fluid ecstasy of Harold’s morning swim and Mary’s quiet joy in a bevy of tulips.

The staging and montages get a lot edgier as suspense ramps up, the action shifts to Toronto and the plot darkens. Harold and Mary’s Number One Son-and-heir (Dean Paul Gibson) boorishly trashes a high-end Chinese restaurant until he’s brutally 86’d by a fed-up waiter (John Ng). Number Two Son (Jonathan Young, yet another Electric Company co-founder) careens through the streets of in panicked flight after he unintentionally wings a corrupt bureaucrat (Ng, again) in a botched attempt at gunpoint blackmail.

Then, too, there’s the high-strung daughter of the house (Jenny Young), who encysts herself in a carapace of financial legerdemain to buffer against remembrance of her late husband’s suicide. About the only relatable relatives, for Mary, are her dutiful and empathic daughter-in-law (Jillian Fargey) and her natural-born Vipassi of a grandson (seven-year-old Henry Bolan).

So something’s fatally flawed, Mary begins to intuit, in the very foundations of the family fortune; it’s all built on sand. After all, she muses to Harold in an eloquent – if conversationally implausible – monologue, isn’t that what concrete is made of? The very concrete with which Harold has paved over so much innocent land; the sand so painfully gouged out of the earth by wretched coolies in someplace or another – is it China, perhaps?

The noose further tightens around Harold when a business rival sends a chilling hitman (Ng, yet again) to warn of complete family annihilation unless a “sacrifice” is made, à laAbraham, of a son – hapless Number Two will do – to assuage the original sin of ill-gotten wealth. To underscore the Biblical allusion, Brooks even interpolates a brimstone sermon (with Jonathan Young recycled as an oddly coltish preacher) about “brokenness” as an “off-ramp” for sin.

Harold winds up broken, alright, by his secret accession to the non-choice of this “sacrifice.” And the unexplained disappearance of her son leaves Mary so broken that she spends pretty much the entire second act of the 150-minute tragedy back in the country house hooked up to an IV drip on her deathbed.

Harold approaches her to transfer her nominee status on some properties to their daughter. “Why?” Mary demands. “For tax reasons? So as not to pay for educating strangers?” She musters her last strength to cast the pen aside, finally -- ruefully -- standing up to Harold for the first time in their married life and banishing him from her bedside for the duration.

Instead, in a catharsis of female solidarity, she dies flanked by her daughter-in-law and the belatedly repentant daughter, who has pledged to use the deeded assets for selfless charity. After the two surviving women head back to town, Harold experiences a catharsis of his own, smashing up the now deserted country house with a sledgehammer.

Melodramatic as it may sound in barebones plot outline, the multimedia format dictates enough performance nuance to lift The Full Light of Day into the realm of powerful tragedy and pointedly pertinent allegory. The players, seasoned professionals, all successfully balance the grounded stage presence of live theatre with the close-up intimacy of film.

The genuine chemistry between Rose and Mezon makes their final estrangement all the more poignant. Likewise Jenny Young, as their daughter, presents such a credible hard-ass to begin with that her Pauline conversion to philanthropy seems a special grace. Ng, as a harbinger of doom, casts a long shadow over the whole narrative arc. And Gibson presents a truly Rabelasian – and all too recognizable – boor for our times.

Catch it while you can on its world premiere run. The Full Light of Day plays next in Toronto and seems destined for a long repertory run before it comes back to Vancouver.