Charles Ross is the Bane of comic book nerds everywhere 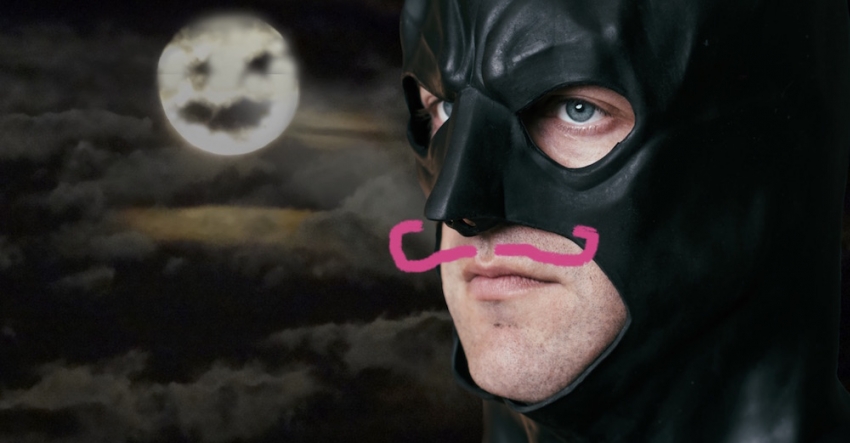 Charles Ross as Batman in one of his lighter moods

Charles Ross is the king of the movie trilogy parody. He has performed his One Man Star Wars over 1000 times, from Edinburgh to the Conan O’Brien show. He followed that up with One Man Lord of the Rings and now he’s onto One Man Dark Knight.

Dark Knight follows in the format of the previous shows—a relentlessly energetic masterclass in imitation. Ross’s impersonations are mostly spot-on. He captures the mordant wit of Tom Hardy’s Bane and the manic wit of Heath Ledger’s Joker.

His Morgan Freeman isn’t as strong, but he can be forgiven as he manages the cast of three sprawling movies, as well as sound effects and incidental music, all by himself.

To watch Ross’s One Man Star Wars was to look out your kitchen window at a particularly adept 8-year-old imagining worlds in the backyard. I expect he called it a “parody” for legal or marketing reasons. It was really an homage.

The Batman movies are darker and, if it’s possible, even more earnest than Star Wars. So Ross’s treatment is appropriately more sardonic.

Being a nerdy Gen-Xer, I’m much more familiar with the original Star Wars trilogy than the Batman movies. I’ve seen them enough times to recognize the tiny details that Ross exactingly replicates, whether it’s the gentle rocking of the X-wing cockpits or Yoda’s cane work.

I’ve only seen the Batman movies once, so there were times when I was lost during Ross’s madcap summary of the first film. They grew more familiar as he rendered the Catwoman-Bane-Batman troika in the third act.

An avatar reflects on his hat choice in Manipulation.

Manipulation is described as “an evening of live performances in virtual worlds”. The show takes place in a dedicated motion-capture studio at Emily Carr University. On-stage human puppeteers interact with a virtual world projected on a screen behind them.

A human on-stage appears as a Sackboy-esque character chasing their hat through a card-stock forest. In another, a performer manipulates a model brain (why is it a brain?) that becomes a spider inside a totemic tree.

Each world was fun to drop into and explore—it’s a neat trick of virtual puppetry.

Off-screen, things weren’t nearly as polished. Evidently, the performers were mostly not trained as actors or dancers. They were also saddled, in the first two plays, with a loose and abstract script that seemed designed to serve the visuals, instead of vice versa.

The performers not only had to deal with the normal requirements of the theatre, but they also had to precisely wield their bodies and props to achieve the right affect on-screen.

The third play was improved not only because it featured some playful juggling, but it was almost entirely without dialogue. Why not make the whole show a dance performance, embracing the abstract and playing to the strengths of the virtual worlds?

Is it notable that there are no writers or directors credited for these shows? It’s a recipe that demands more rehearsal, more seasoned performers or a tighter script.

One of the cast gave a little talk before the show. It was about how motion-capture is mostly used by Hollywood, but that his company was trying to use it to tell simpler stories. It was a very untheatrical way to introduce Manipulation, and seemed designed to lower expectations.

At one stage, the performers played a virtual game of Pong on-screen. That seemed appropriate, as it feels like that’s the stage we’re at with this emergent cross-platform medium. We’re at the Muybridge stage, the L'Arrivée d'un train en gare de La Ciotat stage.

Despite its shortcomings, I’m grateful for this bizarre offering at the Fringe. I didn’t enjoy it, but I’d rather see this kind of experiment than yet another one-woman show about a road trip to Coachella.