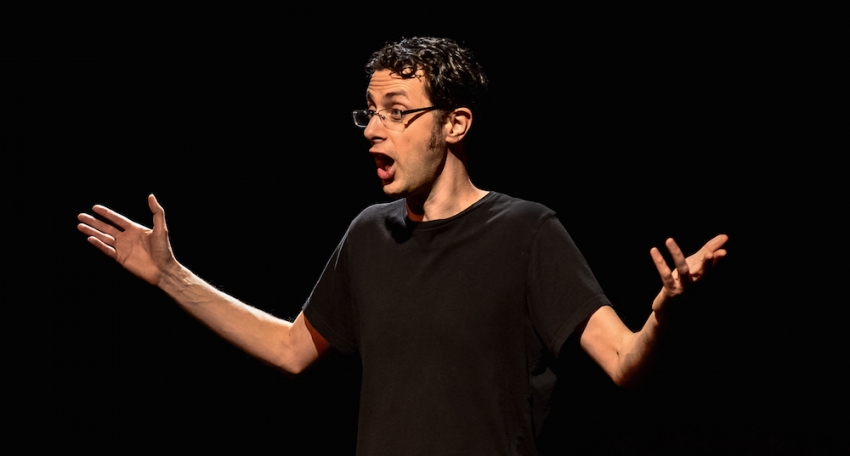 In Burn Job, you’re in the safe hands of storytelling maestro, a veteran of unspooling personal stories at 106 Fringe Festivals. A Burnaby-born Spalding Gray, TJ Dawe spends the entire show seated at a desk, using only his voice and some sound cues to entertain the audience.

The show hangs off the tale of Dawe’s first LSD trip, where he and his friends careen around the Kingsway corridor after taking double hits of acid.

But, as with every Dawe show I’ve seen, it meanders into eddies on the X-men, lesser Rick Astley tunes and Anthony Burgess. The monologue’s themes—about the casual violence of men and the lies we tell ourselves—spiral in on themselves and back out again.

The show’s first two-thirds—Dawe names it as ‘Part One’—is playful and poignant. Part Two is out in deeper water and focussed on Dawe’s self-discovery. Paralleling the first act’s suburban drug trip, he tells the of a New Age retreat where he hallucinates his way through a holotropic breathwork exercise.

When I read the show’s summary, I worried that accounts of drug trips are like dreams—fascinating to the teller, but numbing to the hearers. Instead, it was the New Age-y stories that were a little humdrum. At the play’s conclusion, Dawe doesn’t quite stick the landing the way he’s done with other shows.

Even if Burn Job is among the lesser of TJ Dawe’s work, that still puts it among the best of this year’s Fringe. It’s full of whimsey and truth in equal measures.

A Promising Premise for The Ballad of Frank Allen 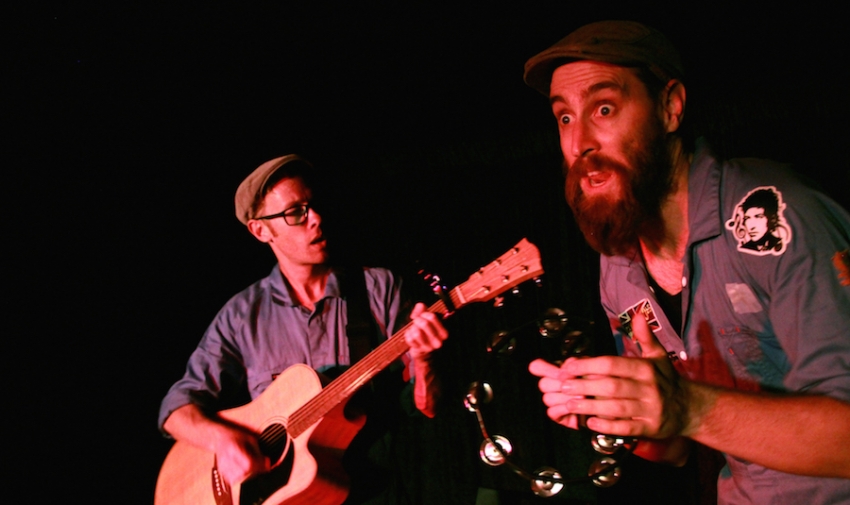 When choosing among unfamiliar Fringe shows, this is my MO: pick the show that’s travelled the farthest on tour. I figure if a show has shlepped halfway around the world, then they must, at a minimum, have an interesting story to tell.

That’s definitely the case for Weeping Spoon Productions’ The Ballad of Frank Allen. It tells the story of the titular janitor (Shane Adamczak) who is accidentally miniaturized and ends up inexplicably living in another man’s (St John Cowcher) beard.

Frank feeds on the leftover cruft of his host’s meals, communicates by tugging on his nose hairs and, as you might expect, misses his wife.

That’s a premise with promise, but I felt a little let down by the company’s execution. The script rattles through some very familiar and Fringe-y tropes: mix tapes, weddings, despised casual employment.

The show is particularly episodic and plays fast and loose with casuality. A thing happens and then another and another, without a lot of inertia to drive the action along.

Instead, the show is carried by the cast’s energy and a number of droll songs. The songs, for me, were the best part of The Ballad of Frank Allen, and I half-wondered why the whole thing wasn’t a musical.

The crowd evidently liked the show more than I did, as they gave it a standing ovation. I couldn’t quite forgive its under-delivery on such an audacious setup.

The Book of Mormon: No longer subversive, but still amuses