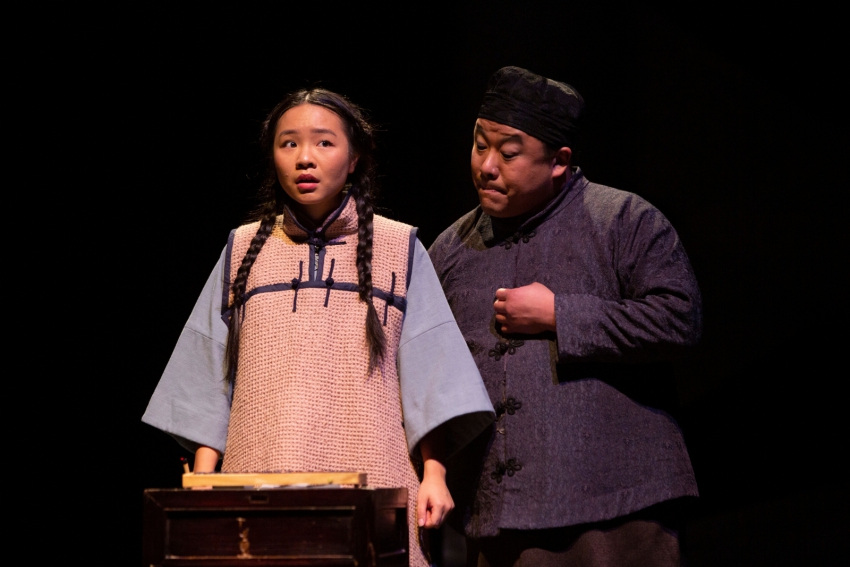 Learning to stand on her own two feet. Photo: Tim Matheson

Rocketry, printing and compass navigation, to be sure; but did you know the Chinese also invented Cinderella? Just one of many ethnographic factoids to be gleaned from Gateway Theatre’s new production of Marjorie Chan’s China Doll.

Makes perfect sense, when you think of it. It takes a culture with a 1,000-year tradition of foot-binding to imagine that a petite shoe size could propel a smudgy drudge into royal robes. That’s the premise on which Poa-poa (Manami Hara), the iron-willed matriarch of a down-at-the-heels gentry family, undertakes to bonsai the pedal phalanges of her female descendants.

In the play’s early 20th century setting, amidst the collapse of the imperial Ch’ing Dynasty and the tumultuous onset of the Chinese Republic, a daintily deformed foot was still enough of a social mobility vector to land Poa-poa’s daughter (Donna Soares) a well-born husband.

But he turns out to be a gambling wastrel whose opium addiction drives himself and his wife to penury and premature death. That leaves the old lady and her grand-daughter, Su-ling (Jennifer Tong) indentured in the sprawling courtyard compound of a many-wived feudal grandee.

Servants they may be, but at least genteel ones, empowered for such decorous tasks as shopping on the Master’s behalf with such upscale tradesmen as Merchant Li (Jovanni Sy), purveyor of fine silks and embroidery. That puts them a cut above such barely human menials as Ming (Soares, again, in a double role), an urchin hanger-on in the grandee’s courtyard.

And, Poa-poa ventures to hope, Su-ling could even someday lift herself and her grandmother out of abjection, as long as she binds her feet tight enough (starting at age five), maintains meekly mute decorum, practices her embroidery and steers clear of riff-raff like Ming.

This proves hard for Su-ling. Her foot bones are warping nicely, at least, with the attendant stilted gait. But she hates embroidery, and she can’t help but be drawn to Ming, her footloose and tart-tongued little contemporary who so blithely kicks shuttlecocks around their shared courtyard. What’s worse, Su-ling’s prone to blurt awkward questions – so much so that Merchant Li at first wants to bar her from his tony showroom.

He soon relents, though, and finds himself increasingly taken with the curious child as she grows up enough to run errands to the shop on her own. The silk merchant hardly shares Poa-poa’s nostalgia for the fallen Dynasty; he’s an uncritical fan of all the modernizing and Westernizing fads sweeping the incipient Republic. He clandestinely undertakes to teach Su-ling to read – a radical notion for girls at the time – and he furtively feeds her books.

He starts her on such juvenile fare as the fairy tale of Yuxian, the Chinese Cinderella, but eventually progresses to such incendiary tracts as the poetry of proto-feminist Qui Jin, who was beheaded in the waning days of the Dynasty. Meanwhile, though, the girl and the Merchant enact their own Chinese version of another familiar Western fairy tale: Rumpelstiltskin.

Torn between her expanding mental horizons and her filial piety towards her grandmother, Su-ling allows her social-climbing Poa-poa to Sherpa her into a stratospherically lofty marriage – no less a station than Second Wife (i.e. concubine) to her Master’s #2 Son.