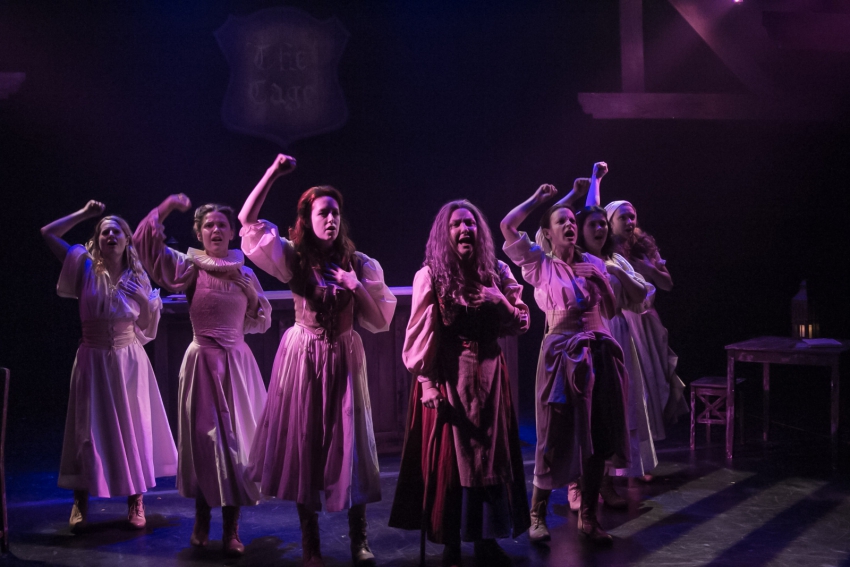 “Making theatre is like having a child, you need more than a penis,” so says a character in Tracey Power’s and Steve Charles’ new musical, "Miss Shakespeare". Running at The Performance Works at Granville Island until May 17, it is an entertaining romp with a message from the creators of Chelsea Hotel.

With a powerhouse cast of seven fabulous female performers : Caroline Cave, Medina Hahn, Amanda Lisman, Pippa Mackie, Susinn McFarlen, Erin Moon and Tracey Power, Power, Charles and director James MacDonald tell the story of William Shakespeare’s daughter Judith (Amanda Lisman) who gathers a group of women in the cellar of a tavern to rehearse a play for the sake of engaging  in the risky business of creation. All the characters have their reasons for being there and Power’s script offers interesting stories for each.

The year is 1600 and women are treated as property with no avenue for expression beyond wife and mother. As rehearsal’s continue for six months, the women finally realize that rehearsing without a performance has no meaning.

Dressing as men in order to have their play presented, Power’s trope is that silencing women, or any disenfranchised people, is wrong. Where that leads or the consequences of that suppression is not delved into but the audience is left empowered by the notion of speaking our truth.

Susinn McFarlen’s Quiney is the narrator, who also fills in as Daddy-O Will with a Shakespeare hand-held mask over her face. A grounded presence with a great voice, she watches the action thoroughly involved and intervenes when necessary.

Charles has done a masterful job of melding these excellent voices with interesting harmonies and spot-on dynamics. The numbers are a treat and Power’s choreography is clever, entertaining and the cast perform it well.

MacDonald’s direction also serves with a sure hand and interesting ideas like turning moving sheets into an abstract backdrop supporting Judith’s passionate solo.

Medina Hahn’s Katherine Rose sings the story of her many miscarriages where she has woven them into personalities with lives. Entitled “Tumbling”, Kahn’s moving fantasy speaks to how we deal with tragedy and Hahn does it with authentic grace.

Sister Susanna played by Caroline Cave is simply wonderful as the traditional older sister who acts as the devil’s advocate to Judith’s fervent competition with her father.

Erin Moon’s Margaret Moore gives credence to a woman who remains a virgin after nine years of marriage. Fascinating to watch, her performance shows a depth of mastery that is truly touching.

Barbara Clayden’s costumes, in shades of cream, cleverly transform the players suggesting the 17th century while projecting them to 2015 and the set and lighting by Cory Sincenne serves the action simply and well.