Indian Ink's Diwali Fest offering at The Cultch: laugh until you cry 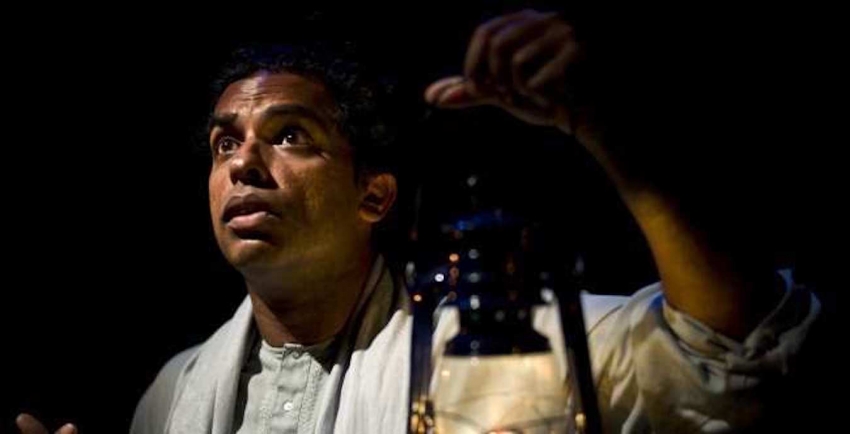 When wrestling pachyderms, bear in mind the Hindi proverb:

Literal translation: “The elephant has two sets of teeth – one to eat with and the other for show.” Metaphorically it means “Things are not always what they seem.” So don’t be taken in by flashy tusks; beware the hidden choppers.

Apt moral to draw from Indian Ink’s Diwali Fest offering, The Elephant Wrestler, at The Cultch mainstage. The 80-minute monologue presents a wry fable of abandoned street wraiths, their sappy adoptive “father” and the upright cop who shields them from the machinations of a shadowy gangland kingpin.

The story is set against a contemporary backdrop of kerbsides, back alleys and station platforms up and down India. Only the title character rises above this milieu, ascending from a railway beat cop to a ministerial bungalow. But then he plunges at last back into the marginalized demimonde of beggars, buskers, pedlars, petty racketeers, stall vendors and cockfight bookies.

When he’s not engaged in intense dialogue or hand-to-hand combat with himself onstage, he’s often trawling the audience for “volunteers.” Or else he’s twitting his voiceless sidekick, Adam Ogle, who provides brilliant musical and sound-effects support as well as a foil for many jokes.

But The Elephant Wrestler is no more of a one-man show than was Tetsuro Shigematsu’s The Empire of the Son, which played at the same time right down the hall in The Cultch’s Lab Theatre.

Like Shigematsu’s loyal enablers in the Vancouver Asian-Canadian Theatre (VACT), Rajan enjoys the staunch backing of a tight-knit cadre of long-time collaborators in Indian Ink, notably his co-author and director John Lewis and his composer, David Ward.

The prolific New Zealand troupe has scored numerous awards in its 20 years on the worldwide festival circuit.

Still, the man in the spotlight is Rajan himself, and he’s not shy about his mesmeric powers. At the very outset, even as he’s warning us to turn off our cell phones, he also offers the audience his personal promise that he’s about to cure us all of  our “fears, loneliness and painful urination.”

The Elephant Wrestler lures us into rooting for the “good guys” in a droll, but anodyne, fairy-tale with every indication of a happy ending in store.

But then, without tipping off any of the convoluted plot twists, suffice it to say that the characters’ actions and motivations – indeed, their very identities – deviate startlingly from what we’d been led to assume. The result fully lives up to Indian Ink’s mission statement for its entire repertoire: “beautiful, funny, sad and true.”

But, even so, no sinecure; we’re still left as scared, lonely and dysuric as ever. And Rajan just shrugs off the fake-out: well, what did you expect? “I’m just a chai wallah (tea vendor), after all.”