Doomed to repeat it? Indelible history 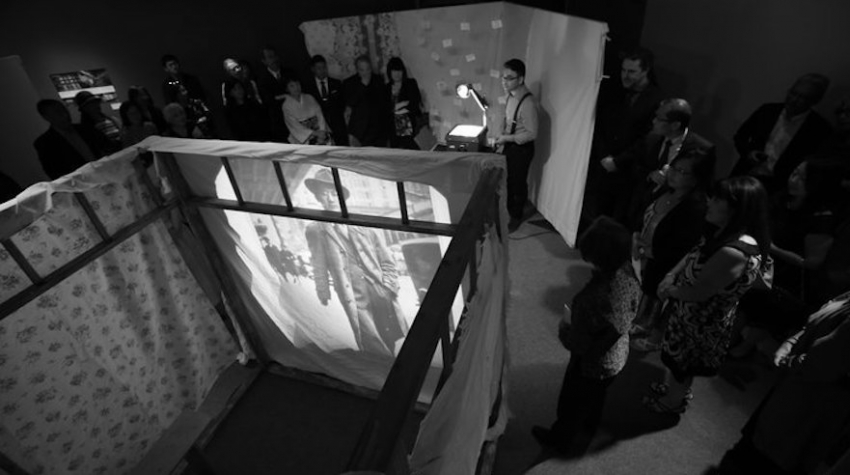 PNE Midway on a rainy autumn night; feels like summer’s never coming back. No more neon, no more deepfried strawberries, animatronic dinosaurs or jousting horsemen. In the Ag Pavilion, the squeals of the Piglet Derby have fallen silent.

But there still lingers a whiff of hay bales, manure and…something else; something implacable, disconsolate -- an intangible presence that refuses to be forgotten.

“Audience” members drift in, picking our way through the acres of parking lot puddles for tonight’s performance of The Japanese Problem. A far cry from standard theatre-going protocols: no lobby, no ushers, no tickets.

A couple of functionaries just check off our names on a list and tell us to wait on a wooden bench until they’re ready for us – much as the entry procedure might have been in 1942-43, when the PNE barn served as the holding pen for Japanese-Canadians uprooted from their expropriated West Coast homes en route to inland “relocation camps” where they were to be interned as “enemy aliens.”

At length, producer/director Joanna Garfinkel shows up to shepherd us into the hangar-sized hall. It’s chilly in there. The sickly light of overhead tube lamps leaves plenty of dark corners. Clangourous slams echo off the concrete walls every time someone opens or shuts a metal stall door. In this site-specific walkabout production, actors loom up suddenly or waft in, ghost-like, from unseen recesses.

First to make such an entry is Yoshie Bancroft, co-producer of The Japanese Problem. She introduces herself as a young schoolteacher and wannabe dancer from Greater Vancouver. Totally relatable as a winsome ingénue, she could pass for a contemporary Gen-Xer, except for her telltale 1940’s A-line dress and silk stockings. Caught up in Canada’s xenophobic World War II hysteria, she winds up sharing a stable-stall/prison-cell with a no-nonsense camp nurse (Nicole Yukiko).

Their rapport is fraught. On the one hand, they’re natural allies; they’re both detainees, and the Ag barn newbie needs a veteran mentor. Yet the nurse – as a minor “public health” functionary – is also enmeshed in the camp’s snitch system which, at the first display of symptoms, consigns ailing children to a coal-cellar sickbay and adult TB patients to a “No Exit” quarantine ward.

Just as conflicted are relationships with the other two characters in The Japanese Problem. A shy out-of-towner (Brent Hirose) ventures a fleeting flirtation with our ingénue, but he’s shipped off to an inland detention centre before the romance has a chance to flower. And Daniel Deorksen, the only cast member without any Japanese ancestry, plays a genial band leader who patriotically enlists as a lieutenant in the war effort, only to find himself overseeing the Ag barn transit camp.

In one poignant scene, Deorksen comes upon Bancroft rehearsing a talent show dance number with Hirose. After sternly quizzing the pair about their potentially off-limits tryst, the guard relents and pulls out a harmonica to refresh their memory of the dance routine’s jazzy score. But after just a few bars, the upbeat music peters out. All three fall silent, seemingly overcome with shame at the circumstance that has thrown them together. The silence stretches on for over a minute until even the audience starts to shuffle uncomfortably.

For a production that lasts just 45 minutes, The Japanese Problem is liberally peppered with these drawn-out silences. The lapses are all the more eloquent as they punctuate a rich soundscape of recorded crowd noise (to reflect the cheek-by-jowl crush of the holding pens) and musical snippets ranging from Big Band hits to pentatonic Japanese flute riffs.

Deorksen, in addition to his acting role, doubles as the production’s composer. At one point, as his haunting shakohachi improvisations reverberate throughout the barn, he emerges from one of the stalls playing a tin whistle. And, as his melody morphs into some trite little jig, we realize that he’s all along been performing his evocative score on this homely toy instrument rather than a classic Japanese bamboo flute.

That sort of little fake-out repeatedly catches us off-guard. Like when the lieutenant meticulously itemizes the expropriated household effects of an interned family ($1000+ dollars worth, as spelled out on a cyclorama-projected ledger) only to then sell off the whole lot for a $40 auction bid. Or when we’re treated to a shadow-puppet show of a cave-full of children’s eyes in the subterranean sickbay while, back above ground, a couple of not-yet-quarantined kiddie puppets continue to romp through the shell of PNE’s wartime-shuttered Playland.

But The Japanese Problem saves up its most shocking dramaturgical ambushes for the end, when the characters spell out what’s become of them after the Ag barn. No spoilers here, but suffice it to say that all of them emerge powerfully affected.

As will you after seeing this important, not-to-be-missed performance. So much so that Garfinkel’s production company has laid on a post-show talk to allow us a chance to decompress. In the discussion, the night we attended, audience members and actors alike shared their own experiences of xenophobia, arbitrary detention and internal exile.

Several, it turned out, had direct family ties to the Ag barn holding pens or the inland detention camps and the generations-long dislocations that ensued. And even those without such first-hand links could readily draw the analogy between Canada’s 1942 “enemy alien” panic and the current waves of anti-immigrant and anti-refugee pogroms in the U.S., Europe and – yes – right here at home even now.

These rising tides of hysteria, along with new oral history inputs from Ag barn survivors, impelled the current re-staging of this year’s new and expanded version of The Japanese Problem after its much-lauded 2017 debut, Garfinkel explains. For more background information and “engagement opportunities,” she refers us to the Japanese Canadian Hastings Park Commemoration and Education Project.