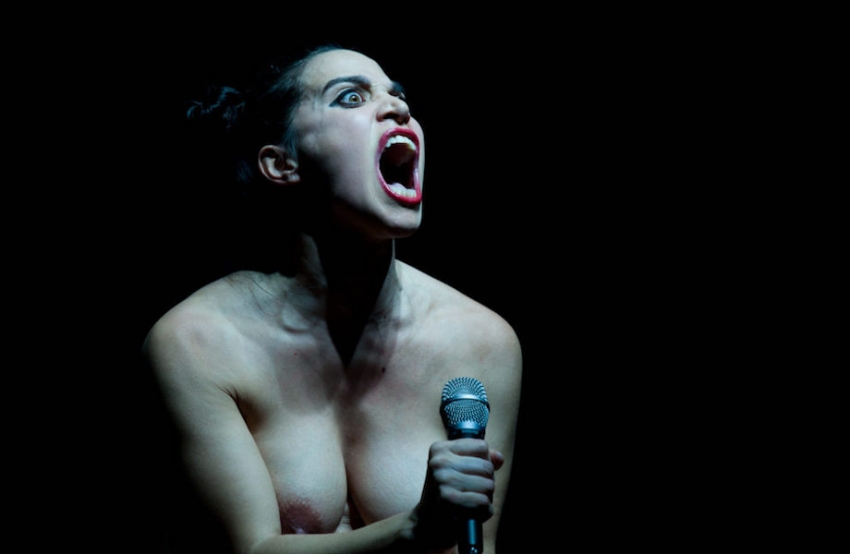 I am Woman: hear me roar! Photo: Valeria Tomasulo

La Merda, the Fringe First award-winning monologue rant, fresh off its three-continent world tour, is well worth queuing up for in its Canadian premiere at The Cultch.

And queue up you must, if you come at all early. The doors don’t open until the hour-long show is already underway. No chitchat in the aisles as you settle into your seats, no solemn acknowledgement of “unceded territories.”

As you file into the theatre, monologist Silvia Gallerano is already poised at stage centre under five converging spotlights atop a sturdy pedestal such as might be used in a trained animal act – a juggling seal, say, or a dancing bear.

And, like a circus seal or bear, she’s absolutely naked.

Stripped of all affect, of course, the naked human body is topologically nothing but a torus – a simple donut or tube, with a hither end and a thither end. Both ends have input and output functions, all of which are unabashedly celebrated in the monologue.

At the hither end, Gallerano’s mouth – preternaturally wide and mobile, accented with a smear of hotplate red lipstick – spews a gush of free associative verbiage, scripted by avant garde opera librettist Cristian Ceresoli. Much of this verbal output details her problematic oral inputs: excessive nutriment and the genital members of strangers.

The two inputs feed off each other – body-shamed self-loathing lays her open to sexploitation. Along the way she channels, with pitch perfect mimicry, a host of bit players in her tragic-comic psychodrama.

We meet her suicide father, her nagging mother, her quack therapists, her casual predators. She even pastiches some of the founding heroes of the Italian Republic (whose local Cultural Centre nevertheless sportingly co-sponsored the Vancouver production).

She yearns for celebrity to assuage her gnawing angst. Tapped to audition for a Fat Girl bit part in a TV commercial, she fantasizes about planking her way to stardom on a casting room couch. No wonder she convulses from time to time with a gagging reflex.

All these supporting roles, including Gallerano’s own self-narrative, are characterised as vocal “masks,” according to the program notes. But at the end of each of the monologue’s three raconteurial “movements,” the masks fall away and she brays her revulsion in a searing, barely coherent dybbuk voice.

Whereupon the torus reverses polarity, with the hither end mainlining through to the thither end. She vows to swallow her sorrows – the fat, the diets, the rapes, the scorn, the consumer cravings, the célébrité manquée – and to shit it all out at the other end. She’ll metabolize the ills that flesh (especially female flesh) is heir to.  Only by purging it all as merda can she ever be “free.”

The whole paroxysm ends with a “counter-movement” coda entitled Italia, a kind of litany, versicle and response, volleyed between her masked and unmasked voices. She reclaims all her outputs as inputs, only to be recycled again and again. (Don’t get too caught up in the plumbing of all this, but also don’t plan on after-theatre supper).

At last she steps down from her platform and covers up, wrapping herself in the Italian tricolour for a very well-earned bow.