"Come from Away" comes home via BAC

Grounded in Limbo on 9/11; what goes around comes around on Trans-Atlantic Great Circle airlanes 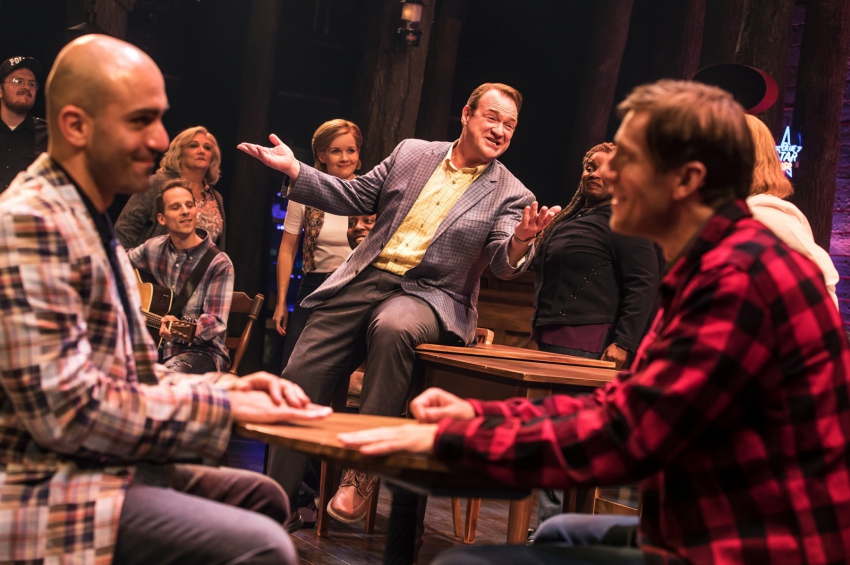 For all its outsized entertainment value and “feel good factor,” Come from Away weighs in as a relatively svelte package, logistically at least, as roadshow musicals go.

I have it on the inside authority of house techies that it took a mere seven 18-wheeler semi’s to load the whole production into the QE Theatre for its five-day run here. That’s barely half the usual haulage for a Broadway Across Canada (BAC) offering.

It shows. Beowulf Boritt’s spare set is just a see-through wall of slats, plus a mismatched assortment of thrift shop chairs (to betoken homely rurality, presumably) and a few looming tree trunks (to remind lower-48 audiences that the action takes place in the boreal wilds of darkest Canada).

The slat wall serves as lighting designer Howell Binkley’s projection screen for everything from drifting clouds to taproom neon. The chairs, constantly reshuffled, can stand in for jumbo-jet seating rows, or a sea cliff overlook, or a Tim Horton’s breakfast counter, or a church nave, or a school bus balked by a shambling moose.

The ad hoc staging is not a bug but a feature. Come from Away is, after all, a saga of making do. It celebrates how some 10,000 down-home Newfoundlanders from the town of Gander on the northeastern edge of the continent managed for almost a week to cope with an out-of-the-blue influx of about 7,000 scared and disoriented houseguests – international flight passengers stranded by the abrupt shut-down of all North American airspace in the wake of 2001’s September 11th terror attacks.

With some 10,000+7,000 individual dramas to address in just a hundred intermission-free minutes, director Christopher Ashley had to go in for some ad hoc make-do on the casting side, too. Each of his dozen onstage players must multi-task in a diverse array of roles, vastly aided by the quick-change wizardry of costume designer Toni-Leslie James and dialect coach Joel Goldes.

So we have Harter Clingman morphing from the town cop into an Orthodox rabbi or a Latin-lover gym teacher; Danielle Thomas playing a loud drunk in the 747 aisle and then turning into the frantic, stranded mother of a missing-in-action NYC fireman; Nick Duckart as a neurotic toy boy and then as an Egyptian hajji humiliated by his fellow-passengers’ sudden suspicion; Chamblee Ferguson as an air traffic controller and then as a bumblingly lovestruck Brit executive; James Earl Jones II as a bewildered African patriarch and then as a wary New York ghetto tough who’s disarmed by Canadian guilelessness; and so on for all 12 of the talented and energetic cast members.

Interweaving these story strands is the genius of Irene Sankoff and David Hein, a Canadian husband-and-wife team. They wrote the book, music and lyrics at the behest of Toronto lawyer, producer and arts educator Michael Rubinoff, who first conceived the project around the 10th anniversary of the 9/11 attacks.

Kibbitzing the decennial reunion of Operation Yellow Ribbon alumni in Gander, the show’s creative trio downloaded scores of the original 9/11 Come-from-Aways (the phrase turns out to be a noun, in the local dialect, for "outlander") as well as their Newfoundland hosts. They then incorporated their stories – often under their actual names – into the script.

The result is a sui generis art form, a kind of quasi-documentary musical extravaganza propelled more by its historicity and good will than its (perfectly workmanly, but rather run-of-the-mill) song-and-dance. For sheer showmanship, the evening’s highlights comes in a contrapuntal, multi-faith prayer scene and a giddy, rum-fueled “Kiss the Cod” ceremony where, to the foot-stomping strains of an onstage Gaelic octet, the grateful Come-from-Aways are sworn in by the town mayor (Kevin Carolan) as honorary Newfoundlanders.

The show started workshopping in 2012 at Ontario’s Sheridan Collage, where Rubinoff is an Associate Dean. By then, alas, Gander's uplifting post-9/11 glimmer of pan-American solidarity and common humanity was already fast receding in the rear-view mirror, obscured by gathering clouds of divisive paranoia.

And the miasma has only deepened in the intervening years, while Come from Away was wending its course through a series of regional tryouts (Toronto, Seattle, La Jolla, D.C. and Connecticut) to a critically acclaimed 2017 Broadway run and now to a BAC roadshow.

All the more precious, then, the production’s timely reminder of the Better Angels of our North American nature – particularly gratifying for a Canadian crowd, judging from the self-congratulatory chuckles and sentimental sniffles in the QE audience.

The show’s success has propelled Sankoff and Hein to a Tony nomination. As for Rubinoff, after receiving the Governor General’s Meritorious Service Cross last year for Come from Away, he is now (according to the BAC program notes) “developing new musicals in Canada and China.”

In the current frosty Sino-Canadian climate, we can only wish him “long may your big jib draw,” which is Newfoundland dialect for “good luck with that, mate!” A feel good musical might be just what's needed to set relations back on track – perhaps a song-and-dance life of Norman Bethune starring Mark Rowswell.