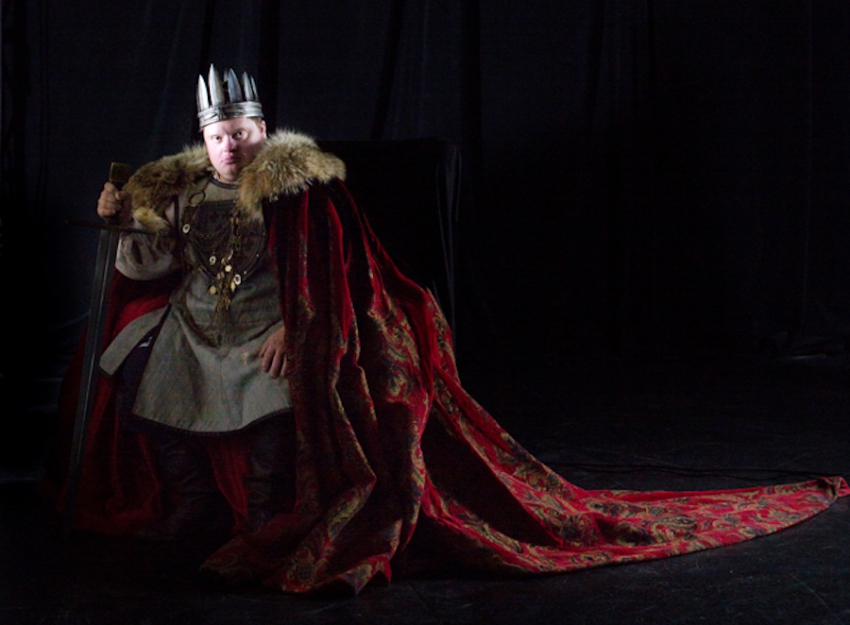 This is by far the most lavish production on this year’s PuSh Festival roster, as well as the biggest show ever mounted by Vancouver’s iconic Neworld Theatre.

Everything about it is outsized.

Except for its stars. Niall McNeill, in the title role, stands a full head shorter than anyone else at the Round Table. His Excalibur broadsword reaches up to his shoulder. Perched on his throne, his boots don’t even reach the floor. Decked out in full-dress medieval regalia (mostly on loan from Bard on the Beach) he looks more upholstered than costumed.

His Guinevere (Tiffany King), at least, is more in scale with him. And so is his axe-wielding battlefield nemesis (Andrew Gordon) and his Goat Palace steward (Matthew Tom-Wing).

That’s because all four of these actors have Down syndrome, a congenital condition in which an extra chromosome can constrain physical growth, mobility and speech production. None of which in any way impairs their intelligence, ad-libbing wit, performative zest or empathic “E.Q.,” as their onstage tours de force make clear.

Neworld’s artistic director Marcus Youssef already had a sense of this, having collaborated with McNeill on the PuShFest award-winning Peter Panties in 2011. That got the pair into co-leading an “Act Up” workshop at Burnaby’s Down Syndrome Research Foundation (DSRF), where he met the other three Down syndrome actors.

As drama professionals, they knew they’d struck theatrical gold. Far from merely muddling through an impaired version of their roles, the Down syndrome cast brought a whole new kind of stage presence to the Arthurian legend.

Their compact stature and economy of speech and motion lend them a certain density that compels a sharper focus on any scene where they appear. The supporting cast of theatre professionals – dancer Amber Funk-Barton and actors Nathan Kay, Billy Marchenski, Lucy McNulty and Kerry Sandomirsky, as well as Youssef himself in the role of Merlin – seem almost wispy and insubstantial in contrast.

And all of them – chromosomally augmented and neurotypicals alike – are canny enough to play off these contrasts. The pro’s (all except Merlin) shape-shift roles around the rooted Down actors. They spout screeds of quasi-medieval persiflage, which the Down players cut through with terse ripostes or droll (sometimes crude) ad libs.

In battle scenes, McNeill and Gordon confront each other like blunt battering rams, each leading a retinue of flailing pro’s brandishing miscellaneous cutlery (as Round Table knights) or aluminum crutches (as four-legged goat soldiers). The effect is like a collision of parade floats.

Alongside all the blood and thunder and pageantry, there’s plenty of love interest. Some of it’s courtly, as in McNeill’s rueful, tender farewell scene with his Queen or Lancelot’s conflicted courtship.  But King Arthur’s Nights also has its raunchy side, as in a drunken coupling between the monarch and his witchy sister Morgana.

The caprine fruit of this union is revealed by goat-boy Tom-Wing in a scene of wondrous, wordless pathos. Equally understated is the balletic grace of Tiffany King’s Guinevere. With a mere shift of her feet or a turn of the wrist, she can evoke whole arcing arabesques.

McNeill and Youssef co-wrote the script in a series of free-form brainstorming sessions that they then transcribed and pared into performable scenes. Music director/composer Veda Hille also worked from recordings of McNeill’s spontaneous, improvisatory chants and hums.

It was left to director James Long, co-helm of Vancouver’s Theatre/Replacement and a long time Youssef crony, to stitch it all together into something that could fit onto the stage of UBC’s Frederic Wood Theatre. Mighty assists from lighting designer Kyla Gardiner and set designer Shizuka Kai, who blazed new frontiers in the use of pipe-insulating foam tubing. Sound designer Nancy Tam supplied a whole range of eerie overtones for the battle scenes, the ensuing hecatomb and the poignant finale.

Arthur, in legend, lost out on his Holy Grail. But his Neworld namesake attains the Grail of a mind-meld among the cast and with the PuSh audience.