Broaching a Bake-off w/o a recipe 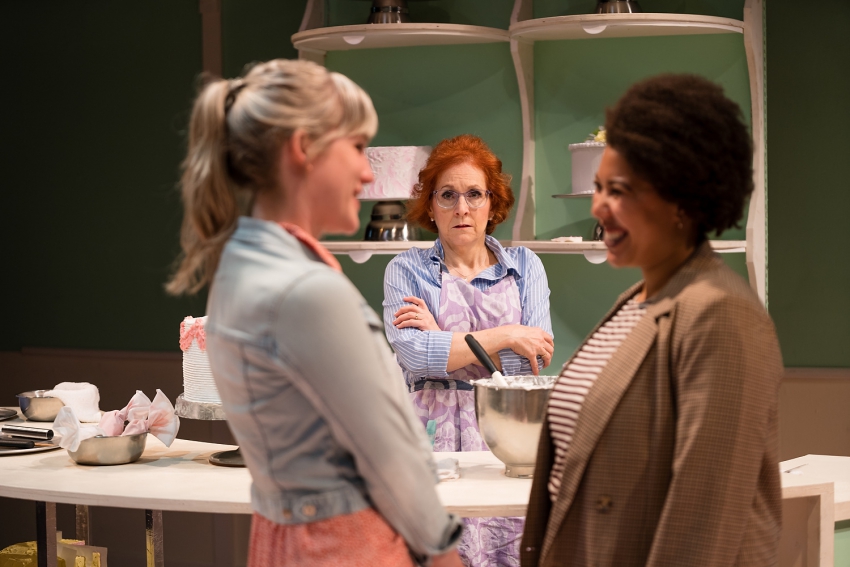 For every same-sex wedding cake case that makes its way to the U.S. (or any other) Supreme Court, there must be dozens of others that are contested in the hearts of individual betrotheds and bakers.

Those are quieter, more nuanced courtrooms where evidence is weighed in terms that are more emotive and cultural, rather than legalistic. It can get messy in ways that are, by turns, comic or heart-rending. And such cases can pose knotty, open-ended questions of faith, love, instinct, empathy and tolerance with ramifications far beyond the ambit of gender-identity or party-planning.

We’re plunged into the thick of such a case in The Cake, a trim and engaging production that concludes Pacific Theatre’s 2018-19 season. Playwright Bekah Brunstetter sets her smart, brisk script in her native Winston-Salem, North Carolina, far from her adopted California home where she plies her trade as a TV writer.

So she’s fluent enough in all the shibboleths of our Left Coast, multi-cultural, Libtard, hypo-allergenic culture. But she also has way more first-hand understanding and sympathy than many of us for the true-believing evangilical denizens of Dixie’s Deploristan.

That allows her to serve up four rounded and sympathetic characters all of whom we can root for, different though they may be from each other in background and orientation. The story revolves around Della (Erla Faye Forsyth), a by-the-book baker whose perfectionism keeps her cake shop perpetually in the red but has earned her a contestant slot in a forthcoming round of a Bake-Off reality TV show.

Tim, her stoutly loyal husband (Tim Dixon) covers the bakery’s losses with his earnings as a plumber, while presiding as her moral and theological arbiter according to his Biblically-ordained duty. Childless, the couple has implicitly adopted a virtual daughter, Jen (Stephanie Elgersma), the child of Della’s late best friend.

But, far from home and unbeknownst to her Deep South kin, Jen has learned a few things about herself during her fresh-out-of-college sojourn in the New York publishing world. Foremost among these liberating but inconvenient truths: she need not submit to the chilling clinch of some “eligible” boy just because it’s the churchly norm. She finds that, in fact, she’d never before felt as free or uplifted as she now does in the arms of her intended bride, Macy (Cecily Day), a black, brainy, mouthy Brooklynite.

Still, when it comes to wedding planning, you can take the girl out of Carolina, but you can’t take the gauzy Carolina nuptial aesthetic out of the girl. Jen’s late mother left a hefty bequest expressly for her daughter’s eventual wedding, and Jen’s already filled up a loose leaf binder with meticulous details of her dreamy Winston-Salem gala.

Back home on a scouting foray, her first stop, of course, is the bakery. “Aunt” Della is thrilled for her and keen to cater the occasion with a butter-cream tour de force. But then it slowly dawns on her that Jen’s affianced is actually that “woke” freelance journalist in the corner quietly scribbling notes while declining, on grounds of veganism, to even sample any of the cake shop’s delectable wares. It’s not a question of Macy’s strangeness or stridency or blackness – but a woman, after all.

Whereupon Della, with Southern politesse, rechecks her calendar and finds that unfortunately her order book is already oversubscribed right around the intended wedding date. Still, the decision rankles. Tim, in a pillow-talk preachment, does his best to reinforce her resolve. Same sex marriage “just isn’t natural.” “Well, neither is confectioners’ sugar,” Della glumly rejoins.

And the two brides-to-be are so obviously in love – a spectacle that sparks Della’s own fantasy life, mostly revolving around the upcoming Bake-off and its dreamboat host, George, tantalisingly voiced (by Tariq Leslie) as a disembodied, faintly Brit-inflected ear worm, by turns wheedling and judgemental. The sheer sight of the young couple also rekindles the long-dormant embers of Della and Tim’s own passion, falteringly expressed in dabs of butter cream and mashed potatoes, respectively.

Please pardon my spoiler; these anointments really must be seen to be fully savoured. But spoiling seems intrinsic to online journalism. For instance, Macy’s freelance blog post about Winston-Salem’s cake shop refusenik turns out to nearly derail her own wedding and get Della pre-emptively disqualified from the long-sought Bake-off.

But it works out in the end, with enough evangelical supporters rallying to Della’s side to finally put the beleaguered bakery in the black. And somehow a Della masterpiece still manages to make a back door entry to the wedding gala after all. So everyone gets to have their Cake and eat it, too – even Macy, who greets her first bite of post-woke confectionary goodness with heartfelt “Oh. My. God.”

But with a lot of help from director Angela Konrad, who has paced the production impeccably and recruited an ideal cast. Forsyth’s Della is an irresistible little petit four portrayal, all candied frills on the outside and melting pastry cream on the inside. Sugar with a piquant overtone of spice, perfectly offset by the blue plate special stolidity of Dixon’s meat-and-potatoes Tim.

Elgersma’s bubbly Jen can still turn around and deliver poignant depth in her coming-out soliloquy. Her wistful mother-daughter bond with Della is entirely credible. Less so is her wifely chemistry with Cecily Day’s Macy.

This, in its way, is the play’s hardest role to bring off, precisely because she most nearly embodies the presumed affinities of most of us urban theatre-goers and Brunstetter has bent over backwards to get us to see things sympathetically from the opposite perspective of small-town, Southern piety. But Day’s Macy goes the distance with us, so that by her final contented sigh we’re ready to join her in her sugar high.

Laughlin Johnston’s stage set is an ingenious confection in its own right – tall shelves, stage left and right, piled high with cream cakes for the bakery scenes. And then the shelves fold down into Murphy beds for the respective midnight confessions of the two couples.

Lighting designer Michael K. Hewitt bathes the bakery in golden illumination, then shifts to cooler, starker spotlights for interior monologues. And for Bake-off George’s voice-from-the-sky, he runs coloured riffs on the overhead, cake-shaped chandeliers. Sound designer Rick Colhoun scores the whole with judicious bursts of piano music that would sound trite but for the ruminative catches he injects into their soap opera fluency.

This is a Cake of many layers, enticing food for thought. Help yourself to a slice, now through June 8.