Breaking out in hives 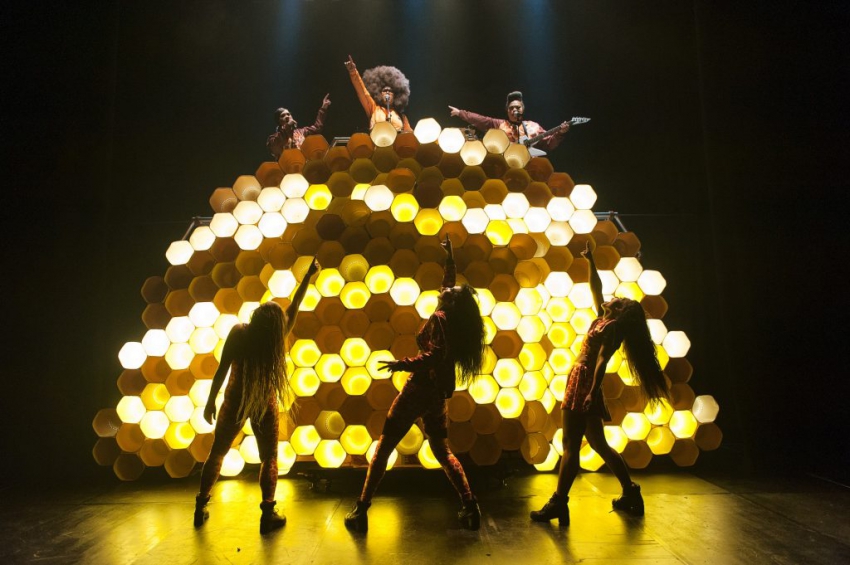 Viva la Buzz! Down with the drones! Photo: Dylan Evans

Stapled to your programme, as you enter The Cultch’s York Theatre for Hot Brown Honey, is a pair of squishy foam rubber earplugs.

You’re going to need them; the all-female Australian variety show wails at rock concert volume throughout its 75-minute length.

The trouble is – between the earplugs, backbeat and antipodal phonemes – it’s all but impossible to make out the words of HBH’s onstage harangues. Which is too bad, since the six-woman troupe seems to urgently want you to get their polemic points.

Still, the basic subtext is clear enough in the continuous splutter of short, blunt monosyllables, or the sepia lipstick that underscores every snarl, smirk and pout. Not to mention the unflaggingly erect, priapistic middle fingers.

A few of the performers invoke specialized super-powers to convey more nuanced messages. Ofa Fotu uses her smoky voice, statuesque presence and amazingly supple face to wring sardonic new meanings out of old torchy standbys like James Brown’s Man’s World or Lionel Richie’s Hello, is it me you’re looking for.

In a class by herself is HBH co-founder, Lisa Fa’alafi. Not only did she write, direct and choreograph the whole farrago; she also designed the over-the-top costumes.

Onstage wardrobe changes – mostly of a reductionist nature – make for much of the show’s razzle-dazzle. Feathers, flags, sequins, frilly French-maid aprons, pussy-emblazoned bikini briefs all get pressed into service. And nobody can outdo Fa’alafi herself at this sort of bait-and-switch striptease.

In one memorable “Polynesian” sequence, clad only in tropical fronds, she gyrates seductively while ‘Hope One,’ grovelling at her feet, flutters her foliage with a phallic leaf blower. Another time, in a Calypso number, she hails some dazed dude from Row H to unravel her interminable raffia skirt and sip sweet coladas through a straw from her coconut C-cups.

This sort of cringe-worthy audience participation seems something of an HBH hallmark. The troupe’s other co-founder, composer/sound designer Kim “Busty Beatz” Bowers, even goes so far as to haul a pair of hapless males out of their aisle seats and onto the proscenium so she can buffet them about the ears with a set of beachball-sized prosthetic knockers she’s strapped across the chest of her leopardskin leotard.

This is a rare downstage foray for Busty. Most of the time she presides as “Queen Bee” atop a hump-shaped matrix of bright yellow hexagonal cells that comprise the backdrop for designer Tristan Shelly’s set. (Get it? Hump => hive => bees => honey). The cells synchronously blink on and off in a shifting moiré of geometric patterns and fleetingly subliminal texts, all meticulously coordinated by lighting designer Paul Lim, an offstage HBH star in his own right.

Lim surrounds the Queen Bee with an aureole of swivelling spotlights that lend her a kind of Great Leader gravitas, like a psychedelic remake of Mao beaming down from the Tiananmen arch. From her lofty perch, Busty cheerleads the audience in antiphonal responses, keeps up a steady tattoo of hip-hop hectoring and regales us with quotations from such iconic Women of Colour as Angela Davis, Audre Lorde or Lilla Watson.

Toke up in advance; this is one show that benefits mightily from chemical enhancement. No intermission.