Breach of the Bard 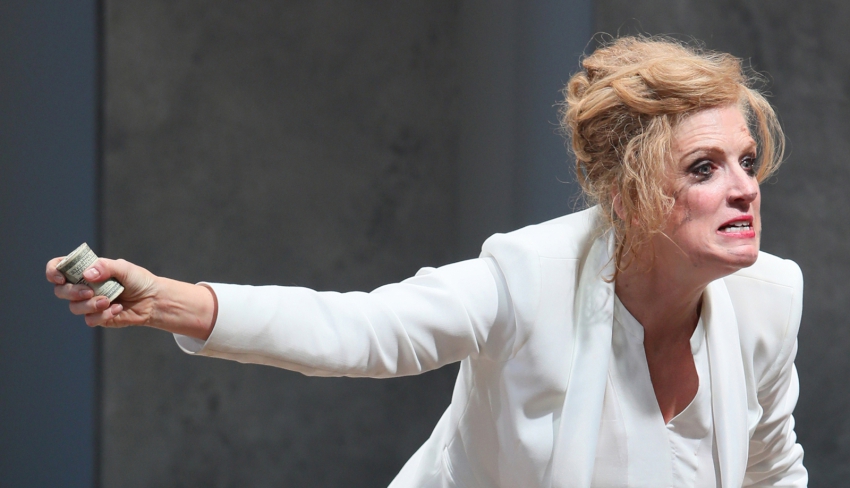 This year’s Bard on the Beach (BotB) rendition of Timon of Athens is dazzling – what there is of it.

Unfortunately, about two thirds of the play has disappeared in director Meg Roe’s anxiety to feminize the script and cram it into a single act, accessible to modern, urban sophisticates.

She underestimates us. Whole subplots, major characters and rapier sharp language all wind up on the cutting room floor. So do some of the thorniest and timeliest themes that the full-dress script could pose for our own dire times.

All the more regrettable as the production gets off to such a promising start. To the cool tinkle of piano jazz, we file into BotB’s intimate Howard Family theatre. Even after the customary “unceded territory” boilerplate, a dozen ladies in high couture summer dresses continue to breeze in, virtually indistinguishable from the audience of casually chic Vancouverites.

The latecomers go on chatting volubly with each other and waving to presumptive friends in the crowd. Presently they coalesce onto the thrust stage, still babbling non-stop as black-aproned waiters circulate among them offering champagne flutes.

Only then do we realize we’re already well into Scene One. Timon, the model hostess circulates among all these Ladies Who Do Lunch, distributing air kisses and pricey door prize baubles.

All this largesse is laid on with grossly overextended credit, her devoted steward tries to warn her:  “she is so kind that she now/Pays interest for 't.” These forebodings are waved away until the debts all at once fall due in (brilliant anachronism, this) a swelling cacophony of cutesy iPhone ringtones.

And even then, Timon remains unfazed, expecting her hangers-on to now bail her out. “I would broach the vessels of my love/And try the argument of hearts by borrowing/… I am wealthy in my friends.”

No such luck. Those vaunted “vessels” prove empty as, one by one, Timon’s appeals are deflected with a honeyed hypocrisy or a catty schadenfreude that’s somehow even more chilling in its female depiction than in the play’s customary male incarnation.

Disillusioned, Timon convenes her coterie for one last feast. The discreet waiters meticulously set the table with covered banquet dishes. The guests assemble, murmuring their relief that she has somehow got past that awkward financial contretemps.

The hostess bids them sit, but precedes the meal with an invocation to the gods. No pentameters here; just blunt prose imperatives calling down curses upon men, women, Athenian senators, “the common lag of people,” even the gods themselves. And, last but far from the least scorned, “these my present friends.”

The diners titter in nervous bewilderment until she bids them “uncover, dogs, and lap.” Lifting the domed silver tureen lids, they find nothing but tepid water, which Timon proceeds to fling in their faces, dashing crockery and tableware to the floor with cathartic clatters.

So far so good. The build-up is perfect, from a seamless extension of a BotB-style lawn party to a cataclysmic explosion of rage and spleen.

But then it all just keeps on exploding. After demolishing the dinner table and scattering her guests and servants, Timon goes on to dismantle the platform of the thrust stage. She hurls aside to the joists to expose the underlying dirt – a powerful statement of despair, but scenically problematic as she winds up hidden from sight for much of the rest of the play, buried in the bowels of designer Drew Facey’s stage set.

Down there in the dirt, she’s scrounging for some roots to eat. But – to her ironic chagrin – she stumbles instead upon an immense stash of buried treasure. Which occasions some fine speechifying about gold, that “king-killer…bright defiler… that speak'st with every tongue/To every purpose.”

House, the confidante, reappears to comfort her, but their reunion devolves into a kind of rank-out contest of misanthropic one-upmanship. Some erstwhile “friends,” hearing of Timon’s windfall, teeter gingerly on their high heels to the edge of her abyss, fishing for a fresh dole. They get blasted back where they came from in a volley of invective.

Her onetime waiters turn up to rob her; she slings ingots at them like brickbats. Only her steward is spared her ire, and that, too, grudgingly: “How fain would I have hated all mankind!/And thou redeem'st thyself: but all, save thee,/I fell with curses.”

To this loyal retainer she confides her vitriolic epitaph. And then, amidst a gratuitous sputter of flashes and bangs (courtesy of sound designer Allessandro Juliani and lighting designer John Webber), she sinks into the dirt under the ruins of the thrust stage, not to be seen again until the curtain call.

Timon’s not the only one to bite the dust in this truncated version of the play. So does the swaggering rebel general Alcibiades, who doesn’t even get a mention in the 2018 BotB staging. In the original script, spurned by the Athenian senate, he withdraws to forest exile and raises an outlaw army to topple the state.

Both the renegade commander and the doddering senators trek to Timon’s squalid hermitage to beg ingots for their war efforts. Timon, out of spite, bets on the warlord as a more pitiless “planetary plague.” Alcibiades sweeps victorious into Athens just in time to read out Timon’s epitaph and, purportedly, “make war breed peace.”

This subplot, untidy as it is, still has light to shed on themes of “redemption, greed, agency, capitalism, friendship, altruism, generosity, societal obligation, nihilism [and] money,” all of which preoccupied Roe as she mounted her production, according to her programme note.

Seen in more than a domestic ambit, Timon’s downfall could have even greater resonance for our own times. At very least it could have made for a better proportioned, less breathless pacing for the latter scenes. And it could offer much needed context for the searing rhetoric.

Granted, the script is problematic, as Roe notes. The writing is uneven, suggesting collaborations and later interpolations. Even the dating is hard to pin down. Its unsparing bleakness has made for relatively few stagings.

Yet the play’s troubled history makes it all the more apt for our own troubled times; it deserves its say in full.