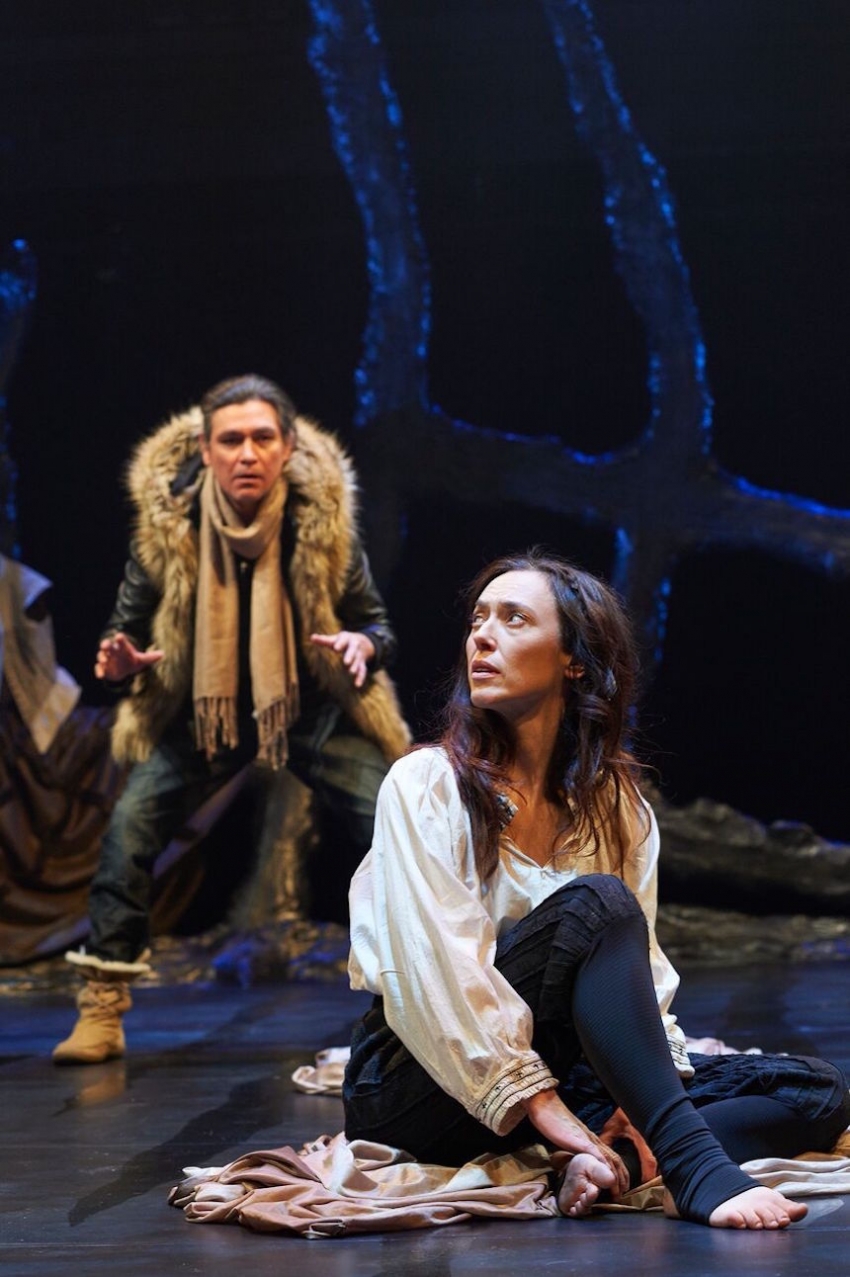 For the coming week, through February 18th, the electric marquee in front of the Firehall Theatre flashes just a single syllable: “Elle.”

French pronoun, third person singular. Decidedly feminine. “She,” not “her ” – a subject pronoun, not an object.

“Elle” is, anyway, a lot easier to pronounce than Marguerite de la Rocque de Roberval. That’s the nobly titled name under which, in 1542, the real-life subject of this historical farrago joined her privateer uncle’s royally chartered expedition to populate the freshly proclaimed crown colony of New France.

On the outbound ocean voyage, she tries to screw her way through her mal de mer through a hyper-kinetic dalliance with a callow tennis enthusiast. But she only winds up pregnant and still as seasick as ever.

What’s worse, the shipboard fling so scandalizes her bluenose uncle that he orders her to be marooned, along with her lover and her elderly governess, on a bleak rock – the “Isle of Demons” – off the Newfoundland coast.

With the onset of Canadian winter, her ball-boy and her nanny soon die of exposure. So, eventually, does the baby she miraculously carries to term. But the feisty, female, French Crusoe hangs on long enough to bumble into a moribund she-bear. She guts the beast and eats the offal piecemeal, climbing into the gory carcass for warmth.

And that’s how she’s discovered by her Man Friday, an Iroquois master hunter (Jonathan Fisher). He has tracked the dying she-bear in a dream-quest to undo the famine that has beset his people since the recent advent of French fishermen on his turf.

As far as he’s concerned, he’s encountered a dream-ordained spirit woman. She, for her part, is pretty sure she’s not a dream, but also knows that her ordeal has seared away the salient hallmarks of the French noblewoman Marguerite. Under the tutelage of her hunter, she’s now just “Elle” – “she.”

And so she remains even when he disappears. As “Elle” she makes her way across a perilous ice bridge to the mainland, crashing through at the end to founder in the frozen channel. It’s “Elle” that’s rescued by an Iroquois shamaness who helps her harness her inner bear-nature.

Tribal villagers know her just as “Elle,” a nameless “she,” as she scavenges her way south to wreak vengeance on her uncle. As “Elle” her legend has even reached the Spanish whalers who finally repatriate her to Europe. Back in Paris, she’s scorned as merely “Elle,” the half-mad crone who haunts the lanes swilling from a flask.

And it’s as “Elle,” an unnameable, unimaginable, hallucinatory “she”-bear, that she impossibly manifests in a Paris cemetery to maul to death her perfidious uncle two decades after that ill-starred outbound Canadian voyage.

In Thompson’s commanding stage presence, all these “Elle” avatars nest within each other like Matryoshka dolls. Her body language and her stream-of-consciousness narrative slide fluidly backward and forward along the story-line, much like the text of CanLit superstar Douglas Glover’s novel from which Thompson herself adapted the script.

To bring it to the stage, director Christine Brubaker of Toronto’s Theatre Pass Muraille coordinates a behind-the-scenes team of top-tier Canadian talent. Production designer Jennifer Goodman enables all the mutations of “Elle” with just a few costume elements that double as props, plus ingenious lighting effects such as the dappled blue-white silence of the underwater scene.

The set, in its stark simplicity, is endlessly versatile. A canted steel lattice becomes the hull of a ship, the ribs of a bear skeleton, an impenetrable forest, a craggy promontory. A diaphanous shroud becomes the sail of a ship, a wave, a tent, a grave mound, an ice floe, a rearing, enraged she-bear, a smothering carcass, a banner of defiance or the radiant aura of a spirit-animal.

Fisher, Thompson’s co-star, projects a Zen stolidity for the very few – and very effective – scenes that he shares the spotlight. But he’s never offstage, constantly hovering in the penumbra behind an array of consoles to queue up composer Lyon Smith’s jagged soundtrack. Now and then Fisher even picks up an electric bass to embellish the score.

Still, attention never strays away from the central figure of “Elle,” herself. Movement coach Viv Moore has choreographed for her a stage-filling (and strenuous!) cascade of “physical theatre” tropes.

But it’s Thompson’s face that remains the focus, with its parade of passion, pain and wry paradox scrimshawed deep into her ivory matte make-up. The face haunts us long after her final bow, like a ghostly ultrasound glimpse of a Canada yet-to-be-born.