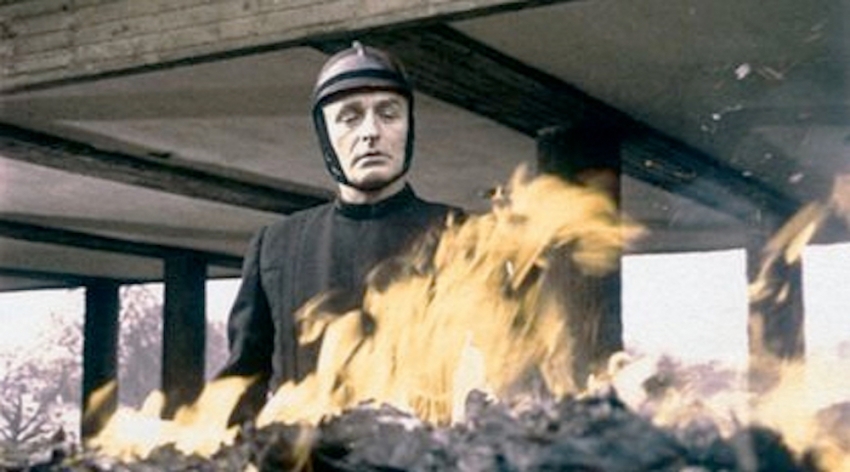 451° F -- the vanity of the bonfires. Photo: Francois Truffaut

Just in time for T-Day, Portugal has sent its National Theatre director, Tiago Rodrigues, to fortify us against the coming Trumpocalypse in "By Heart" presented by the PuSh Festival.

The antidote is simple and free: just memorize something – anything, whatever word-string, mantra or mandala you think worthy of tattooing inside your brainpan.

Best if you and a cohort of like-minded memorists can choose a passage together. Then you can share the work, further disseminate your talisman text and form a disciplined combat unit, a booklegging brigade – a battalion, even – to deploy against the onslaught of Deplorabilia.

To show how it’s done, Rodrigues forms up one such platoon before our very eyes, injecting 10 audience volunteers with the serum of Shakespeare’s sonnet #30. Over the course of 90 minutes, with many historical, literary and autobiographical digressions, he tutors this chance assortment of Vancouverites to recite – word-perfect by heart! – the poem’s 14 world-weary yet paradoxically hopeful lines.

That selection was by no means random. Rodrigues quotes his lit-crit idol, Cambridge don George Steiner, relating how dissident Russian writer Boris Pasternak braved the very nadir of Stalinist purges just by calling out, at a 1937 Soviet Writers Union conference, the number “30.” Whereupon the whole roomful of cowed literati defied their attendant spies, censors and minders by reciting in unison – by heart! – Pasternak’s well-known translation of that very sonnet.

For, as Steiner says, “once 10 people know a poem by heart, there’s nothing the KGB, the CIA or the Gestapo can do about it.” Shared culture, internalized, is our surest bulwark, whether against authoritarian encroachment or our own mortal oblivion.

Rodrigues drives the point home with illustrative anecdotes ranging from Osip Mandelstam to his own aged Grandma back in Portugal. He lingers lovingly over Ray Bradbury’s Farenheit 451, a tale of covert memorists bucking the apparatus of state-sponsored book burning. The dystopian novel was written in 1953 at the height of America’s McCarthyite witch hunts.

451° F, he helpfully reminds us, is the temperature at which paper spontaneously ignites. You can try this at home, he suggests; just pre-heat your oven and pop in a burnable book. “Even here in Canada, you must have some books worth burning,” he adds. “Hasn’t Kevin O’Leary written something?” (This gag, Germanized, did not go over well, he notes, when he performed By Heart in Berlin).

Rodrigues’ wry monologue, delivered with impeccable timing, provides a mnemonic framework, a kind of “memory palace” on which hang the lines we’re learning. He also offers lexical footnotes as needed. In their choral recitations, he even conducts his 10 volunteers like an orchestra maestro, with a characteristic hand flourish for each of the varied metrical combinations within the broad iambic framework.

In the end, he has each volunteer panellist ingest a little wafer – a kind of “secular host” – with the sonnet text micro-printed in vegetable ink. It’s sugarless and vegan, he assures us, but not necessarily gluten-free. (“Always some gluten in Shakespeare”). The rest of us get similar micro-texts, but on inedible paper.

It all works, at some subliminal level. And not just for the onstage bookleggers, either, but also for the rest of us in the audience. The morning after, quizzed by my wife, I could still retain about 70% of the poem. Well, maybe 60%.

A few more run-throughs and we’ll get there. And already we feel a little better inoculated against the pandemics to come.