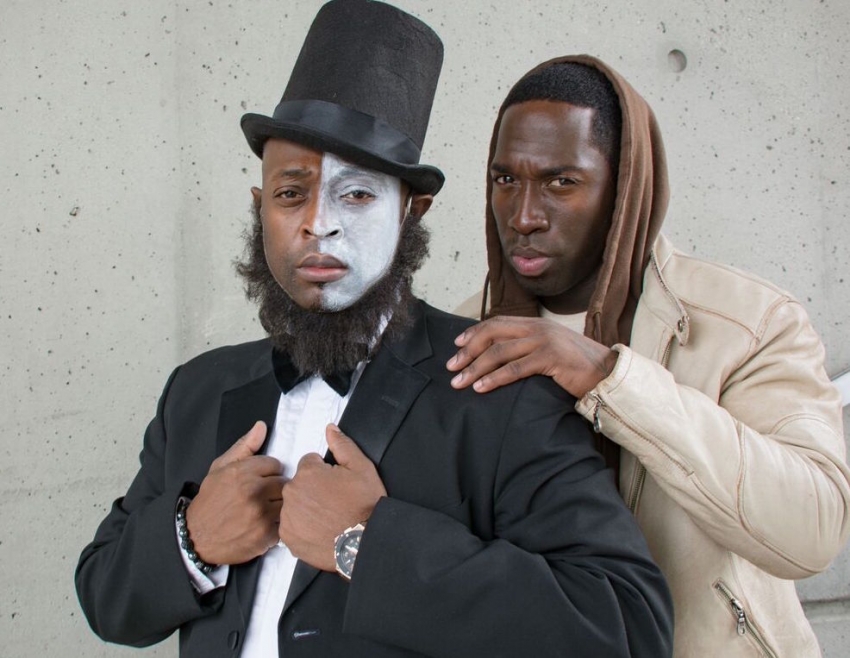 Link the Stink & 3-card Booth; the hand is quicker than the eye -- or the heart. Photo: David Chiarello

From the moment the lights come up in Granville Island’s Studio 1398, we already know how “Topdog/Underdog” is going to end: with a “Bang!” for sure.

The Seven Tyrants production opens with L’il Bro David Lloyd, centre stage, riffing a mile a minute to reel in imaginary chumps while rehearsing a dazzling flurry of 3-card monte “throws.” And right there, on the milk-crate card table in front of him, is his “heat” – a snub little revolver, the very paradigm of “Chekhov’s gun.”

As if that weren’t clue enough, there’s Lloyd’s character name – Booth – alongside that of his Big Bro and co-star, Lincoln (Aadin Church). Not to mention Church’s aspect – ghastly in whiteface, with a bedraggled tux and top hat and a hook-on beard – when he first erupts into the windowless boarding house cubicle the two down-at-the-heels brothers share.

The costume, you see, pertains to Big Bro’s cherished day gig, “a sit-down job with benefits!” – playing a killable Honest Abe in a penny arcade shooting gallery. For a modest fee you can pop him off with a cap gun; he dies a dozen deaths a day.

A pretty surreal premise (one hopes!), but this is, after all, Theatre of the Absurd. Director and Seven Tyrants co-founder David Newham, in his program note, even likens playwright Suzan-Lori Parks’ Pulitzer prize-winning script to the masterpieces of Absurdist arch-priest Samuel Beckett in the eloquently “specific word usage, the unspoken subtext and the rhythms of the language.”

The specific usage and rhythms of Topdog/Underdog are those of 2001 black street argot. But the unspoken subtexts remain timelier than ever in our own increasingly virulent post-truth era.

For Booth and Lincoln are nothing but self-aggrandizing con men. They boast non-stop about their scams, heists and luridly imagined seductions (with all-too-real consequences for their hapless marks). Sounds at all familiar?

But then Parks looks beyond their obvious deplorability to sketch in a humanizing back-story of abandonment and victimization. From their teens, the brothers had no one to turn to but each other for backup and affirmation. Aside from fitfully intermittent material support, that mostly meant lending an ear to braggadocio without too pointedly calling the bluff.

That has made for an almost telepathic economy of communication between them, as reflected in the mercurial mood shifts and terse poetry of Parks’ lines. Church and Lloyd match that with the jagged elegance of their body language, brisk and florid by turns, with occasional relapses into the baby-faced innocence – and hurt – of their shared childhood.

Both actors turn in masterful physical comedy, interspersed with smouldering violence, with the foregone conclusion of that inevitable “Bang!” ominously overshadowing the whole trajectory.

Powerfully propelling that trajectory, in the Studio 1398 production, is the add-on booster rocket of an onstage (but out-of-sight) live jazz trio. Seven Tyrants’ co-founder Daniel Deorksen performs guitar and leads the combo from the drum set, with Kurt Schindelka on sax and piano and Chris McKnight on bass.

Even though they're playing off in the wings of the intimate black-box theatre, the real-time presence of the combo lends the drama an apt sense of immediacy and improvisatory risk that a recorded score could never match. Plus, the jazz is top-notch: an original take on Coltrane’s Equinox and a pair of Miles Davis staples, Flamenco Sketches and Jean-Pierre.

Whether you approach it as a drama with music or a jazz concert with a poetic/narrative subtext, do take in this Western Canada premiere of Topdog/Underdog. It runs through December 3rd.