Belly up to some bangra 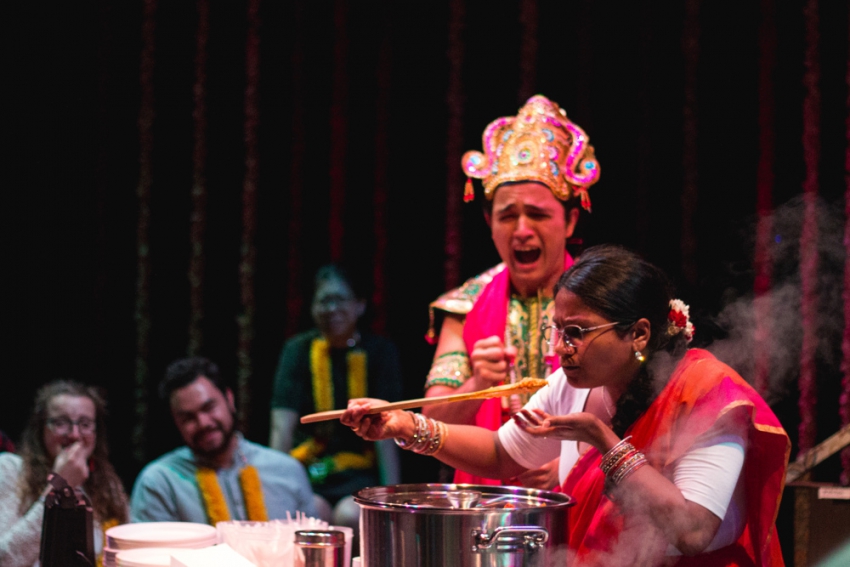 To that end, for the show’s Canadian premiere, the visiting troupe has gutted the theatre seating out of the Cultch’s Culture Lab and converted the black-box space into the backroom warehouse-cum-kitchen of a New Zealand convenience store (or “Dairy,” in Kiwi-parlance). The establishment is run by Mrs. Krishnan, an Indian immigrant widow, with the bumbling assistance of her college student boarder.

The Cultch set is a pretty convincing backroom replica, too, right down to the stacked Weetabix crates, mysterious masala jars, ecumenically cohabiting religious icons and vinyl-stripped entryway curtain. All very typical, except that young James (Justin Rogers), the boarder, has secretly festooned the place with marigold malas, queued up a raucous playlist of dance tunes and smuggled in 100-odd assorted strangers – us, the audience – as a surprise party for his landlady.

In this guise, James ushers us each to some random perch in the eclectic hodgepodge of seating – some around a stolid dining table, some on kitchen counter stepladders, some in concentric rings of folding chairs, some on peripheral barstools and even a few wallflower standees. We’re issued garlands and scarves and balloons and told to shout “Surprise” in unison as soon as Mrs. Krishnan (Kalyani Nagarajan) appears.

When we do so, she freezes in horror with a deer-in-the-headlights stare behind her outsized rectangular eyeglasses. But she promptly recovers and takes charge of the untimely intrusion, mothering her unexpected guests, even matchmaking among them, all the while marshaling us to collaboratively whip-up the celebratory Onam feast of high-octane dhal.

She’s a diminutive sparkplug of energy, by turns shy and fluttery or caustically upbraiding (mostly to the hapless James). Now and then she breaks into an explanatory dance dramatization of the Mahabali myth (Nagarajan’s an accomplished bharata natyam dancer). But then she just as readily bangras on the table or coos coyly into her cellphone or wheedles voicemails to her son.

Director, co-author and India Ink co-founder Justin Lewis wisely left ample play for impromptu audience participation and ad hoc improvisation by his two talented performers. In her mannerisms, accent and body language, Nagarajan is pitch-perfect as a Keralite matron. A trio of Malayali girls in the row behind us on opening night kept squealing “Oh my God, that’s just my Mom!” And Rogers’ gangly James, with his DJ patter and Gumby dance moves, provides the perfect foil for the spitfire little matriarch.

It seems a lot of New Zealanders might be hard-pressed to imagine anyone they’d rather party with than the Krishnans, who first hove onto the national scene in Krishnan’s Dairy, a beloved 1997 sentimental masked drama/sit-com – sort of a Kiwi analogue, perhaps, of our own Kim’s Convenience.

Krishnan's Dairy has now toured four continents and is soon to be made into a feature film. The new show's widowed Mrs. Krishnan presents a bittersweet update of their 20-year-old love story, and the late Mr. Krishnan even manages to make a cameo reappearance in the current production (never mind how; no spoilers here).

But even for non-Kiwi’s and non-Malayali’s, there’s lots of laughs and a few sentimentally affecting moments in Mrs. Krishnan’s Party. And the dhal (actually cooked by all of us right there on the spot) turns out to be delicious, despite a concatenation of kitchen mishaps. The audience bonds so well that the after-party lingers on long after the 75-minute show.