Be it ever so gimcrack, no hell like home 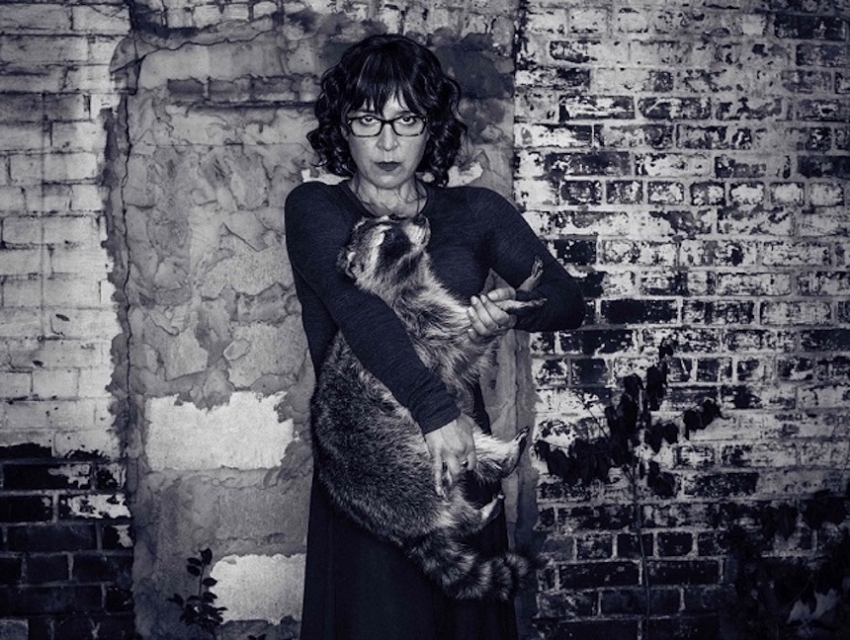 Boca del Lupo’s newest performance space, the Fishbowl on Granville Island, looks to be about 400 ft2 – just about the size of “the smallest house in Toronto” that actress/authoress Karen Hines chose for her entrée into the charmed circle of homeownership.

For her tragi-comic monologue on the existential perils of Canada’s overheated metro property markets, Hines has fitted out the performance space much the way an up-and-coming hipster might furnish an entry-level “condo-alternative.” Hassocks, faux fur, battery-powered fake candles, Pottery Barn geegaws.

As the 20-odd spectators file in, Hines’ shy amauniensis, Studio 58 intern Lili Robinson, seats us on the assorted thrift shop chairs, benches and throw pillows lining the room. She offers us each a complimentary shot of vodka. We’re going to need it for the harrowing tale to come.

But so far everyone’s still blithely chatting. Only Hines herself avoids all eye contact, glowering at one end of the room behind a plank table strewn with papers and gooseneck lamps. Prim in a grey business dress and square-framed specs. Blood-red lipstick. At her elbow, a bottle of Stolichnaya, ¾ full.

Her cellphone rings (with an unnervingly human cry) to call us to order. She begins calmly – even dotingly – with a description of the charming little “coach house” she bought in a gentrifying neighbourhood. Bamboo floors, hand-cut slate tiles, lots of phone and cable jacks, set back from the road.

For her seller, a sweet old widow, it was a “passion project,” according to the handsome (Buddhist!) broker who conveyed it to Hines with the written assurance (in clipped realtor orthography) that “EVRTHG HS BN DN.”

Sure, the $30K down payment has swallowed up the cumulative life savings of Hines’ struggling-artist income. And, sure, the mortgage costs twice her previous rent. But, then, she’ll be able to break even by subletting half the year while she’s away on gigs – a textbook case of what she now recognises as “artist math.”

Piecemeal she learns how much remains to be DN. The “coach house” is actually no more than a shoddily refurbished garage. Roof tiles fly away, faux wood lintels snap, drains leak.

And then the rear wall of her washer/dryer closet drops off into her backyard neighbour’s garden. Whereupon she discovers that this cubby – the only storage space in the house – actually hangs two feet over her property line.

The account of cascading woes grows ever more manic with each new double-shot of Stolichnaya. Shedding any lingering diffidence, Hines now “holds [us] with [her] glittering eye,” like the Ancient Mariner. Younger audience members – aspiring homeowners? – listen wide-eyed “like a three years’ child.”

But the woman beside me, veteran real estate journalist Susan M Boyce, barks appreciative laughter at each new outrage. In 20 years on this beat, she’s seen it all and the whole sad hegira rings dismally true.

By this point, Hines has given up on actually attempting to live in the “coach house.” She just wants to fix the manifest flaws and tart up the place for quick resale. She’s not out to “flip” it, as she now realizes her seller and broker had done to her. But she hopes to “stage” it so that it’s “anodyne” enough for any potential buyer.

Which launches her into the meretricious world of Ikea/Pottery Barn décor. In the process, she runs up more than her initial down-payment in credit card debt, so that she now has “negative equity” in the house. This makes her feel “worth less than nothing.”

Too demoralized to land artistic work anymore, she considers a turn to “hooking.” That’s when she calls an intermission – for herself, not for us. She adjourns to the bathroom, sobs loudly through the door. When she returns, she lies that she’d just had to answer a phone call.

Whereas in fact – as she later avers – she’d just dropped a hit of acid, purportedly the only way she’s able to get through Act II, the Saga of the Stench.

It starts as just a little nostril-tickling whiff – forgotten laundry? A mouse trapped in the crawlspace under her floorboards?

But, instead of dissipating, as promised by her realtor, it swells and grows over a period of sweltering summer months to become an engulfing miasma of Death – “the opposite of aroma therapy” – prompting the bleakest existential ruminations. “There is a rhythm at play. Something elemental, with a dark heart.”

At last, after refusals by many pricey contractors, she finds someone – a friend of a friend – willing and able to tunnel into the sealed off crawl space and extricate the corpse. A large adult raccoon, they think. Hard to tell for sure, since by then it had turned to a putrid jelly.

Still, Hines can’t stop speculating on how the raccoon met its end. Did it [or ‘he,’ she decides] deliberately choose her crawlspace as a mausoleum after a long and venturesome life? Or just crawl in and get trapped there to starve, freeze, thaw and stink?

Either way, she imputes to it [‘him’] a kind of ascension once she finally manages to sell off the “coach house.” His animal soul rises up to gaze in benign detachment over the whole gentrifying precinct – realtors, flippers, laneway vermin and all.

She invites us to celebrate this apotheosis through a shrine she’s assembled from a bit of taxidermy and some Pottery Barn candles.

And Hines herself soars right alongside him, in spirit at least, even though she’s left with “less than nothing. In nothingness, I am free. In my freedom I am home.”

By her calculation, she’ll be paying off the cumulative debt of the little yellow house for the next 72 years. Help her out by booking a ticket from Boca del Lupo. The show runs through February 18th.