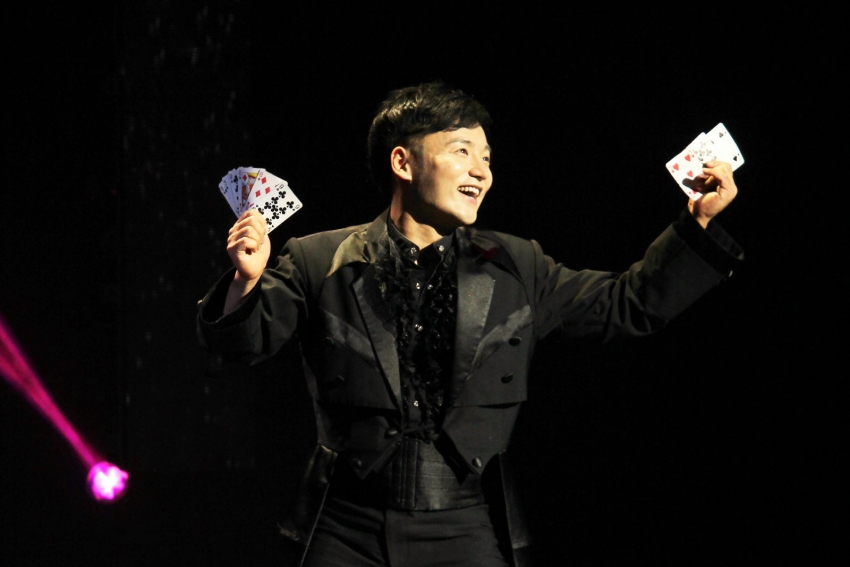 A truly stable genius can divine our unfairly lopsided trade advantage over the U.S. But to most of us flighty Vancouverites, it sure looks like our southern neighbour still gets the drop on us, at least when it comes to cultural commerce.

Case in point: roadshow behemoth Broadway Across Canada (BAC) has just shipped us a semi-trailer full of a staple of American export: Grade A Grift. From now through the weekend, a quintet of fast-talking scamsters will dupe us rubes with dazzling displays of misdirection and distraction.

To be fair, we’re willing accomplices in our own duping.  The chicanery is unabashed; admitted, after all, right in the title – “The Illusionists” – of the two-hour stage magic review.

The hodgepodge show may lack the narrative or thematic coherence of BAC’s typical musical comedy fare. But the slick production values are up to the usual top-tier Broadway standards.

And at least onstage grift (unlike grift as a ruling national ideology) is entertaining and harmless. No one gets raped or killed or jailed, no coastlines drowned or air fouled, no treasuries looted or sovereignties suborned.

Still, the technology of bamboozlement is pretty much the same, whether in the Queen Elizabeth Theatre or the Oval Office. The key thing is to generate a steady stream of titillating irrelevancies to divert audience attention away from the actual scam.

Each of BAC’s five Illusionist bro’s has his characteristic diversionary shtick, as encapsulated in his own self-awarded nom de sorcellerie.

Canada’s own Darcy Oake, who styles himself simply “The Grand Illusionist,” surrounds himself with a bevy of frisking dancers in rivet-studded black leather as he materializes live doves out of thin air. Korea’s An Ha Lim, “The Manipulator,” encased in the black taffeta carapace of a many-pleated tuxedo, exfoliates thousands of playing cards from his fingertips, all the while smirking in enigmatic silence.

“Futurist” Adam Trent, the sole American in the starring quintet, gets maximum mileage out of the quasi-democracy of audience participation. He repeatedly calls us all to our feet for some plebiscitary variant of “Simon Says,” only to dismiss most of us back into our seats until he winnows the audience down to a few malleable confederates. He also creatively interacts with lighting designer Jared Sayeg’s swiveling spots and Nice Studios’ glitzy video projections.

Composer Evan Jolly keeps the whole farrago jouncing along with a steady – if somewhat aimless –score of amorphous electronica. But it takes more than just a backbeat to keep a cavernous theatre-full of 2,000+ spectators engaged in a spectacle as intimate as onstage sleight-of-hand.

So, in an (inadvertent?) hat-tip to the world’s current Grifter-in-Chief, Illusionist director/creative producer Neil Dorwood borrows tropes from the cutting edge medium of Reality TV. He has his performers stalked and encircled by prowling, black-clad, Ninja-like cameramen, with the resulting close-up footage displayed on an overhead Jumbotron screen.

It’s a prestidigitator’s dream, a triumph of deflection. The hand is, famously, quicker than the unaided human eye, but way quicker than the misdirected video eye. And infinitely quicker than the plodding human mind in an ecstasy of willfully suspended disbelief. Very enjoyable for a couple of hours.