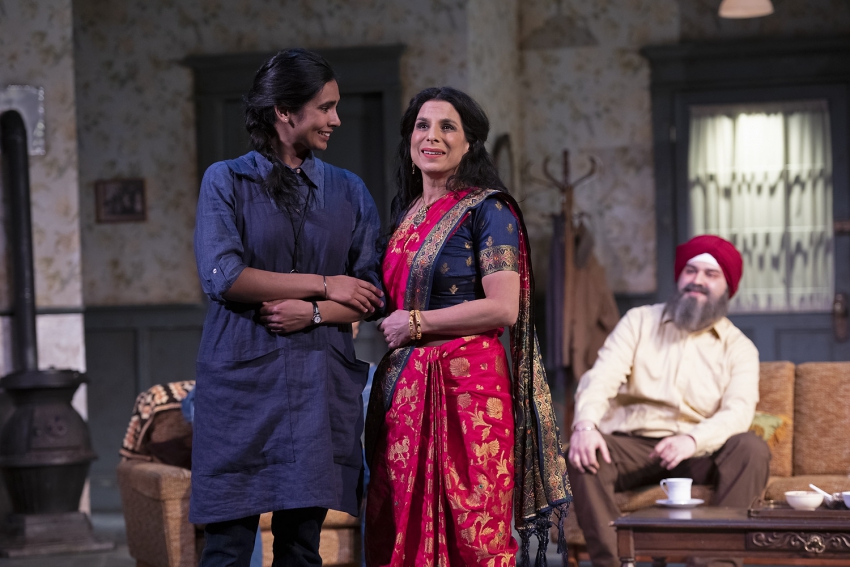 They don’t make them like that anymore: the declamatory, existentially engaged, nostalgia-tinged tragicomedies of Anton Chekhov. Nowadays, playwrights, actors, directors and audiences alike have lost the habit of confessing psycho-social dilemmas in preternaturally eloquent – and lengthy -- speeches.

We’re no longer used to Chekhov’s proto-Absurdist dialogue, with all those navel-gazing characters somehow talking right past each other. Nor are we quite at ease anymore with an elaborately emblematic morality play like Chekhov’s 1904 milestone, The Cherry Orchard, each of whose dozen-member dramatis personae incarnated some distinct class or caste in Russia’s tsarist twilight.

All the more credit, then, to up-and-coming actress/playwright Sarena Parmar, for bringing this challenging, mannered, dated – but vital masterpiece – back home to her native Canada. Specifically to the Okanagan, where she grew up on a Sikh family-run fruit farm much like the transposed locale of her adaptation, . The script premiered in a theatre-in-the-round production, starring Parmar herself, at last year’s Shaw Festival in Ontario, but now makes its full-stage debut at the Arts Club’s Stanley Industrial Theatre.

Kudos to director Jovanni Sy, ably assisted by set designer Marshall McMahen and lighting designer Sophie Tang (both long time collaborators from Sy’s just-completed stint at the helm of Richmond’s Gateway) for their brave effort to unfurl this populous parable in the ornate Art Deco splendor of the Stanley. It’s not an easy fit.

Just as Chekhov’s Russia was in flux between the emancipation of serfs and the onset of revolution, so too was Parmar’s Okanagan in the 1970’s in the throes of transition from a lilywhite agrarian backwater to a multiethnic eco-tourism mecca in the wake of Pierre Elliott Trudeau’s diversification initiatives. So, in lieu of Chekhov’s class-based pièce à clef, Parmar presents us a mosaic of ethnicities.

The center of gravity is an immigrant family of Sikh fruit-farmers. Laara Sadiq stars as an unmoored, spendthrift matriarch still reeling from the loss of her husband and only son. In the wake of these tragedies she decamped to India, where she was fleeced by a conman paramour.

Now returned to B.C., she can’t quite grasp the immanent foreclosure of the family orchard – a prospect all-too-real to her brother (Munish Sharma) and two daughters (Risha Nanda and Adele Naronha) who’ve been running the failing farm in her absence. Assorted Indian sidekicks orbit around the core family: a crassly opportunistic Bollywood-style playboy (Praneet Akilla), a grandiloquent “professional student” (Nadeem Phillip) and a solicitously doddering old grandpa (Parm Soor).

The family has its non-Punjabi retainers, too: a pair of Nisei house servants (Yoshié Bancroft and Kai Bradbury) each with their own pretensions of gentility, but still shaded by the legacy of Canada’s World War II internment camps. Then there’s a tough Residential School runaway (Andrea Menard) who made her way via the Indian Rodeo circuit back to the Okanagan farmlands abutting her native Sylix Rez.

Not to mention the bemusedly tolerated Anglos who attach themselves, limpet like, to the sinking ship of the Punjabi’s orchard. Tom McBeath, as the mooch-next-door, successfully taps the soft-hearted matriarch on the very eve of foreclosure. But the definitive hanger-on is a crass loudmouth of a huckster (Andrew Cownden) whose abusive father once toiled as a lowly peach-picker in this very orchard, but whose self-made fortune now enables him to save the Sikh family’s fortunes – if only they’ll consent to demolish the ancestral house and trees for an RV park.

Chekhov fans, recognizing many of these plot twists, should be duly impressed by the clever adaptations to our own locale: not just the macro-transpositions of down-at-the-heels landlords to immigrant Sardarji’s, but also such deft little touches as the substitution of a First Nations ranch hand for a freelance governess or a Bombay shyster for a sniveling butler (stand-out cameo performances, both).

Parmar, to her credit, preserves much of the Chekhovian dialogue verbatim, splicing in her own gag lines, topical references and lyrical landscape evocations without any jarringly conspicuous stylistic seams. Sadiq scrambled heroically to keep up with her character’s mercurial moods. As her grimly conscientious, churchy elder daughter, Noronha was the very picture of passive aggression. Cownden grew in his role from an interloping buffoon to an almost endearingly conflicted swaggerer, so convinced is he of his own self-aggrandizing my-way-or-the-highway “philanthropy.”

But, unlike her source text, Parmar doesn’t end with the dying grandpa’s bittersweet nostalgia for the old homestead and its orchard. Rather, she gives the last word – a keening salmon chant – to the Sylix cowgirl, who’ll still be here long after all the rest have gone. Far more apt and more hopeful, as a piece of Canadiana, than anything in Chekhov.