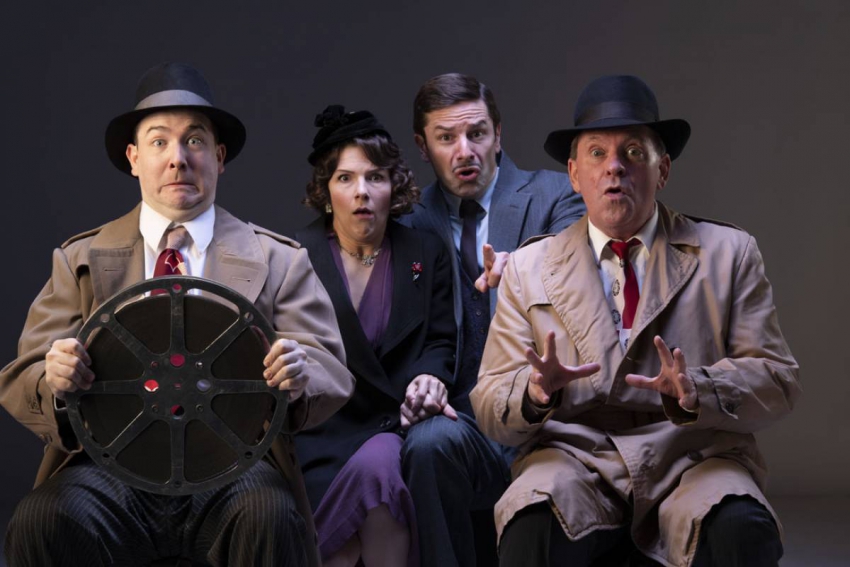 You never know where an evening’s lightsome entertainment might lead you.

When Canadian tourist Richard Hannay booked a ticket for Mister Memory’s mnemonist act at London’s storied Palladium vaudeville venue, he little dreamt that he’d wind up pursued across Britain by a nationwide police dragnet for a murder rap, an international spy ring for his coded messages and a trio of love-starved beauties for his irresistibly dashing pencil moustache.

It’s enough to keep you on the edge of your seat in Alfred Hitchcock’s 1935 seriocomic masterpiece film The 39 Steps (itself adapted from a 1915 novel by Baron Tweedsmuir, Canada’s 15th Governor General). But, in Patrick Barlow’s 2005 stage adaptation, Hannay’s misadventures are likelier to keep you on rolling in the aisles with laughter.

Or, rather, 滚地大笑, if you happen to be one of the lucky Chinese that have comprised nearly half the audiences so far in this week’s Norman Rothstein Theatre run of Circle Bright Production’s 39 Steps. That’s because the Vancouver version is the first ever in the 20+ year history of Barlow’s perennial crowd-pleaser to include Chinese surtitles – a bid, according to Circle Bright’s founding producer, Chen Hanying, to build “a bigger demographic…for great local theatre.”

Not that you really need surtitles – or, for that matter, any prior acquaintance with Hitchcock or the angsty milieu of inter-war Britain – to “get” this two-Act romp. The sight gags speak for themselves, largely driven by Barlow’s conceit of rendering the whole roster of 150 dramatis personae with just four actors, who also double as scene-shifting stagehands and even, occasionally, inanimate props.

Of the four, Jay Hindle as Hanny is the only one who sticks to a single role, albeit a frenetic one that keeps him literally running (at least when not smooching) for nearly 100 minutes straight. But the other actors are hardly less hectic. Ella Simon portrays assorted female walk-ons, as well as all three love interests – a vampy German double-agent, a Glaswegian ingénue and an uptight English ditz who gets swept up in the adventure despite her prim instincts.

A couple of genius Clowns – David Marr and Kazz Lezkard – play everybody else, morphing before our eyes from cockney milkman to suave master-spy, to bumbling cops, to sentimental landlady, to society matron, to traveling lingerie salesmen, to dour crofter, to Mister Memory himself, & cie. & cie. This they achieve with incredible limberness, facial plasticity and an array of exaggerated accents and mannerisms.

Not to mention director Sarah Rodgers’ split-second stage blocking and a whole panoply of Sheila White’s quick-change costumes. Half the fun derives from set-and-prop designer Drew Facey’s evocation of Hitchcock’s celebrated scenarios using noting more than a few ladders for a parlous railroad trestle, some steamer trunks for a hurtling train, lots of dry ice for swirling fogs, hand-held frames for windows and doors, inter alia.

Lighting designer Gerald Kind juggles spots and gels to convey some of the flicker of the early talkies. Sound designer Murray Price chimes in with his own set of studiedly hokey effects – howling winds, creaking doors, bleating sheep and such. Much of the soundscape is translated into keyboard riffs by pianist Matt Grinke, who stays onstage throughout the show, interacting with the performers from behind his baby grand.

So there’s a lot to attend to in this production, even without having to divert your eyes to the surtitles. And indeed much of the humour would get lost in translation, anyway. When his Scottish honey urges him to escape “oot the windy,” the caption 透过窗户 would leave us just as baffled as the uncomprehending Anglophone Hanny, e.g.

But never mind. Physical comedy alone carries the day to make for a thoroughly delightful evening’s lightsome entertainment. Then again you never know quite where that could lead. You just might 笑得捧腹.