A day in the performance of Marion Bridge 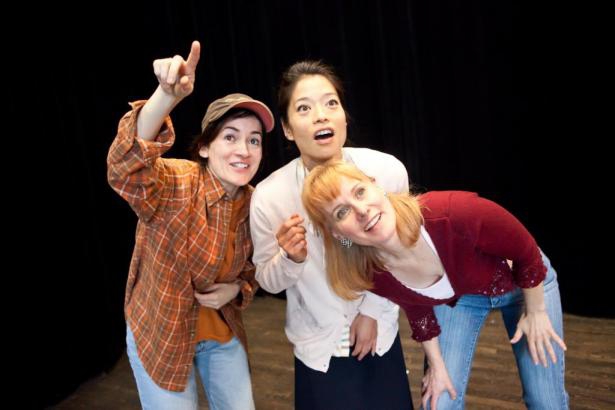 Jeanie, Rebecca and I bump fists quietly in the blue-light shrouded darkness of the closet sized dressing/green room back stage at the Havana Theatre.  Susan M (our magnificent Stage Manager) has just given us our fifteen-minute call and we can hear the audience as they settle into their seats.  It sounds like a small house tonight, which is something we remark upon to each other for technical reasons only.  A full audience means we need to up our vocal energy a bit more – more people means more sound is being absorbed and there may be more rustling about.  We need to ensure that our voices are heard above it all.   Less people means a more intimate performance so we pull back on our vocal strength just enough so the audience isn’t lambasted with our performance.

The Havana Theatre on Commercial Drive is a small, intimate 60-seat theatre with the front row sitting almost on the stage itself.  This is only our third performance since our Preview on Feb 4th and our smallest audience.  We’ve been fortunate to have almost full houses for our Opening show on the Feb 5th and for last night’s show.  While we would like to have a sold-out house every night, we’re looking forward to experiencing a smaller audience.  Each night is a different mix of people, a different mix of energies, which in turn, prompts new discoveries about our characters.

Our fist bump ends as we whisper our ritual words, “To infinity and beyond!”  We look at each other and then take turns to quietly say “Honour the story.” And “Trust the work.” Then we finish by vowing to each other “I got your back!” – meaning we’re all in this together as a team and no one will be left hanging after a mistake made on stage – which WILL happen in live theatre!

Susan M knocks on the door and peeks in to tell us it’s time for places.  I follow her out and walk quietly behind the curtain to stand just before the far right opening.  A few minutes later the house lights go down and Michael Rinaldi’s incredible mix of music over the sound of waves rises up to bring Marion Bridge to life.  I look for the small strips of glow tape that mark my way to the stool on stage where I sit down and prepare to open the show with my monologue.  I give a quick glance up into the audience before the lights come up and note where the people are sitting and where the empty seats are so I know where to direct my words.  Before I know it I am bathed in light and I begin “In my dream I’m drowning….”

Two acts, one intermission and almost two hours later we take our final bow and leave the stage for the last time.  We smile at each other and take a bit of time to shake off the characters we’ve inhabited for the last two and a half hours.  It’s been a roller-coaster ride of emotions and while we’re physically exhausted we’re also still pumped with adrenaline and won’t be able to drop off to sleep until well after midnight.  It was a good show and the audience was completely engaged throughout the entire performance; lots of laughter as well as tears.  As John Jane at Review Vancouver wrote “Marion Bridge is a tender story of small victories and personal heartaches that is at times sentimental, but never maudlin.”

Watching theatre is an active entertainment unlike film and TV where watching is passive.  The theatre audience is a member of the cast without scripted dialogue and action and because of this, each performance is slightly different.

We finish hanging up our many costume changes and organize the props for tomorrow night’s show then gather our bags and head to the door.  Just as we’re about to leave we’re stopped by a group of four people who were in the audience. They tell us how great the show was and how much they enjoyed it.  We stop and chat with them a while and then open the door into the cold night air.  As we’re walking along Commercial Drive a young woman stops us as she steps out from under an awning saying, “I just saw you.  I was just at your show.   It was wonderful, so moving.”  She touches her heart and looks at us and says again “You moved me.”  We stay and talk with her for a bit before saying good-bye.

Jeanie, Rebecca and I stop and hug as we reach our cars before we go our separate ways.  This is a long held dream come true for all of us and it’s hard to believe that the dream is being realized so completely.  Theatre of Infinity was born of our passion and need to tell stories; to honour the truth inside of us in such a way as to affect other people.

Jeanie Cloutier, Rebecca Husain and I met five years ago at a master scene study intensive workshop held by esteemed acting teacher Larry Moss and we’ve studied and worked together ever since.  Several years ago we started looking for a play to mount together and found Daniel McIvor’s award winning play Marion Bridge.  Just over a year ago we asked Susan Hogan if she was interested in directing.  I had met Susan at the 2008 National Voice Intensive and knew instinctively that she would make a great director and would be a good fit.  Through Susan came the wonderful Susan Miyagashima as our Stage Manager and Set Designer, Michael Rinaldi as Sound Designer and Conor Moore as Lighting Designer.  We are so incredibly fortunate to have been given such warm, supporting, creative, caring and fun people to help launch Theatre of Infinity’s inaugural production!

Marion Bridge  opened February 5 and runs through until February 19 (Sundays through Tuesdays dark). There will be two matinees on February 12 and 19, all matinee tickets $15. All performances take place at the Havana Theatre, 1212 Commercial Drive Vancouver. Tickets are $20 for one ticket or $35 for two, students $15 with valid ID. All tickets for the preview are $15. Tickets are available at www.bizbooks.net.