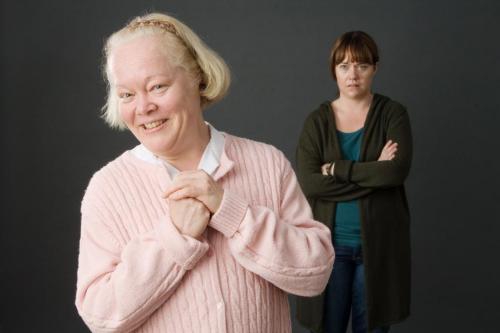 ‘Night Mother won Marsha Norman the Pulitzer Prize for Drama in 1983. Running till November 13 at the PAL Theatre, the Good Company Collective shows us why.

Directed by Carol Hodge, ‘Night Mother iis a high stakes drama involving a mother and daughter relationship fraught with love, care, need, guilt, shame, blame, and resentment. Thirteen minutes into the play, we learn that daughter Jessie (played by Bronwen Smith) is going to commit suicide. Mama Thelma (played by Wendy Morrow Donaldson) spends the rest of the play trying to convince her not to.

The set, designed by Kari Gundersen, is a kitchen and a living room filled with worn but clean appliances and homey touches. A door separates the two sides, indicating Jessie’s room where she plans to shoot herself in two hours. A clock with the real time ticks over the door.

The claustrophobia of the agoraphobic and depressed daughter as she tends to the chore of preparing those she cares about for her death, is created through director Hodge's blocking of the play. Jessie keeps busy with daily household chores  she’s done by rote since moving back in with her mother  after her divorce from her husband Carl. Within this minutia, she has created a life that no longer has meaning to her, despite a troubled son who could use her support.

The original production featured Kathy Bates as daughter Jessie and Anne Pitoniak as Mama Thelma. It went  to Broadway with the same cast and  received four Tony nominations:  Best Play, Best Actress in a Play (both Bates and Pitoniak) and Best Director (Tom Moore). It also won the Susan Smith Blackburn Prize, the Hull-Warriner, and the Drama Desk Award. Sissy Spacek playing the daughter and Anne Bancroft the mother in the 1986 film version won Bancroft  a Golden Globe nomination for Best Actress (Drama) in a Film.

Does the Vancouver version come close to its illustrious predecessors?

Hodge does build the suspense of the final moments of the play with the emotional arcs inherent in the script. Her work with the comedy---and yes, there are real comedic turns---is less deft due to the disparity in the two actor's performances.

Morrow Donaldson is a masterful actor who completely achieves the journey of this extremely difficult role. We understand that Mama Thelma is a simple woman, a doer rather than a thinker, who grows up poor, marries a farmer she does not love at a young age and tries to find the joy in life through her candy, her children and her community. Small town, but not judgemental, she tries her best with limited resources.

Morrow Donaldson uses a myriad of tactics with clear and specific intent, so we believe in the relationships in her world. She also knows how to work towards a laugh, building to a situational punch line within the character’s framework.  The words of the blue collar form easily in her mouth without sounding false, nailing the place of the play to rural southern United States.

The beauty of a two hander is the interplay between actors mining emotional depth that can leave an audience questioning their own lives or understanding another’s. Smith keeps busy throughout the play and “what” she’s doing is always apparent whether it’s leaving lists for her mother or gifts for those she’s leaving behind. Sadly, “why” is never clear.

Playing someone depressed enough for suicide, with the complete self absorption this implies, is tough. Though Smith displayed emotion during the preview performance,  she needs to  find more of the depth and specific action needed to help us understand her relationship with her mother and of her suicide. For this play to be wholly successful, you have to completely believe in this mother/daughter relationship, understand the importance of the mother’s presence and knowledge of the suicide and see why someone would be driven to kill themselves in the first place. Smith has the run of the play to find those answers so the audience can then find them as well.

‘Night, Mother is a Canadian Actors’ Equity Association approved co‐op. It runs till November 13 (Sunday and Monday nights dark) at 8:00 p.m. with weekend matinees at 2 pm on both Saturdays and Sundays. A representative from The Crisis Centre will do a question and answer session about suicide after the show on Nov 3 and 10. Tickets are $15/20, Tuesdays are two‐for‐one. Tickets are available through BizBooks.net, or at the door. Reservations can be made by calling 604‐365‐9445. All performances take place at the Performing Arts Lodge Theatre, 581 Cardero St.