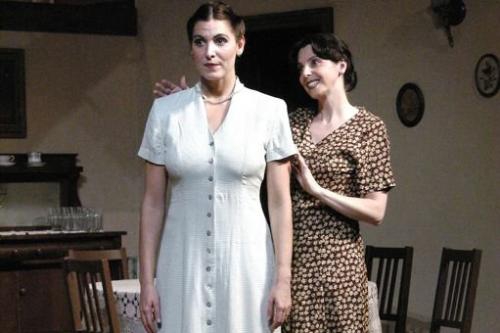 The odds were against Melanie Preston being cast as Blanche in the latest Metro Theatre show, Brighton Beach Memoirs.

Preston had missed the show's original June audition. The 34-year-old was staying with family in Victoria when she heard that Metro was still casting for two of the upcoming show's major roles: Kate and Blanche.

"I thought, do I really want to come back to Vancouver just for this audition?," she says when reached by phone. "But then I went to the library of Victoria and read the play... I could tell it was good."

Preston made the trip to Vancouver, auditioned alongside four other women for the two parts, and ended up with the role of Blanche: the asthmatic, widowed aunt of the 15-year-old narrator.

Brighton Beach Memoirs is Neil Simon's semi-autobiographical account of a Jewish-American family living in Brooklyn during the depression era. In this coming-of-age story, the narrator Eugene navigates his way through the trials of family life with his mother Kate and his father Jack, his older brother Stanley, and his Aunt Blanche and her daughters Nora and Laurie.

"I love the character," Preston says of Blanche. At the beginning of the play, she sees the character as overly accommodating and submissive, in keeping with her financially-dependent status in the family; by the second act, however, Blanche becomes, "tired of living in self-pity". She gradually begins to assert herself and look outward from the family cocoon.

Preston, who has a Jewish background herself, says "I kind of understand the family dynamic. Kate is like a typical Jewish mom. Kind of 'tough love'. That's a standard thing - they try to hold the family together."

Kate will be played by Gina Ray Young, who stepped into the role on relatively short notice. "I'm excited to work against her because she's very good," says Preston.

The chemistry between cast members has helped them come together as a family for this particular show, according to Preston. "I get along great with my daughters. Almost too much," she says, admitting, "We just can't stop giggling at rehearsal some nights."

For Preston, playing the role of Blanche is also helping her come to terms with a series of trials in her personal life over the past few months. She originally came to Vancouver in December to stay through the Olympics, and ended up experiencing various job- and relationship-related difficulties.

"I've had a very, very hard year in Vancouver," she says. "Very emotionally-trying. And I can't help thinking that maybe this all happened to help me release this woman I'm playing somehow."

Things are looking up for Preston, but even now, she still struggles with the question of how to balance her stage career with her need to earn a living. Currently, she works a day job at the Flight Centre and looks for acting work, paid or unpaid, on the side.

"I decided that, for me, it's more important to do it, rather than get money," she says.

Brighton Beach Memoirs opened at Metro Theatre on August 28th. The show is produced by Alison Schamberger and directed by Rita Price.