Little Bastards look to shake up the Vancouver theatre scene

A young and ambitious group of actors, apporpriately named the Little Bastards, are looking to raise the stakes of independent theatre in Vancouver, one empassioned audience member at a time... 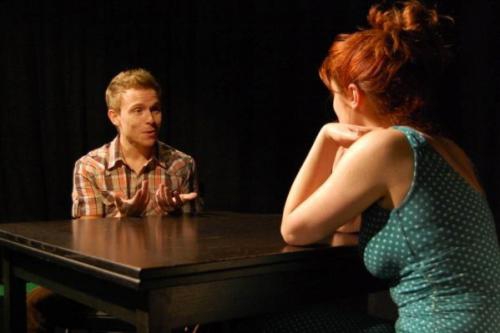 Some of the young actors of The Little Bastards (Adrian Petriw and Taylor Hill) hope to make a big splash with their company's debut, Beyond Therapy

Last week I caught up with actor and first time director Anthony Shim, outside of a fundraiser for the brand-new theatre company the Little Bastards.

The fundraiser, which featured the musical talents of The Black Boots and Paolo Brian, was an energetic coming together of young actors, writers, directors and other creative types hosted at the electic Little Mountain Studios on Main and East 26th.

The night's enthusiastic mood couldn't be more appropriate for the event, which was hosted to celebrate the birth of the new theatre company as well as to raise funds for their inaugural show Beyond Therapy by Christopher Durang, playing at Studio 16 from July 13 to July 18 at 8pm nightly.

Comprised of actors whom some might deem "up-and-comers," Shim, Bryce Hodgson, Adrian Petriw, Victor Ayala, Taylor Hill and Brenden Taylor of the Little Bastards may be young, but are by no means inexperienced.

In their early-to-mid twenties, they have already worked together with Kate Twa, formerly of Lyric School of Acting and founder of Cucumber Satellite Theatre Company, for the better part of the last ten years.

While all of the members of this multi-talented collective have an enviable list of film and television credits, they are going back to their first love: theatre, in hopes of shaking up the local theatre scene.

Although dedicated to the craft, Shim was at first recluctant to start a theatre company in what he described as a sometimes conservative theatre town.

"Making theatre is a daunting task, especially in a city like Vancouver where doing theatre is a struggle. There is not a lot of people in city to begin with and there is not a lot of people who want to see theatre. I could go on and and on about the reasons why you can't or shouldn't do theatre, independent theatre, in Vancouver," he said with a chuckle and an eye roll.

Finding a million reasons not to, after a bit of convincing by the persistant Hodgson, Shim eventually did give in to the idea of starting a company, but not before visiting Hodgson in New York (where he was studying at Circle in the Square Theatre School) to seek out inspiration.

It was while in the Big Apple that Shim discovered what the Vancouver theatre scene often lacks: full-out passion.

"What hit me so hard was the excitement and the energy and the demand from the audiences for a good fricking show," he recalled. "The actors brought it. The experience was so alive. People in the audience were totally in to it, they were hungry for it. And I thought: Why don't we have that in Vancouver"?

Moved by Broadway and with a clearer vision of the changes he wished to see (to make exciting fly-by-the-seat of your pants, fun theatre happen more often in Vancouver) Shim and his friends wasted no time in getting the company up and running.

And, while the group may be ambitious, Shim does realize that any effect on the local scene will take time.

"I am not going to say that we are going to change the Vancouver theatre scene, I don't know if that is something that is possible," he said. "What we can try to do is raise the level of the quality of work and give people a really great show."

"Audiences need to walk out of the theatre moved, in whatever emotional way possible. That is the whole point of theatre. If audiences are not moved, if they are not touched in some way then they should demand their money back, or riot," he laughed. "I don't know if we are asking too much, but that is what we want."

With big dreams and big talent, I think local theatre goers will have a lot to look forward to from this brand-new theatre company in the months and years ahead.

Tickets for the Little Bastards first show Beyond Therapy are $15 each and available by email at [email protected] or at the door.