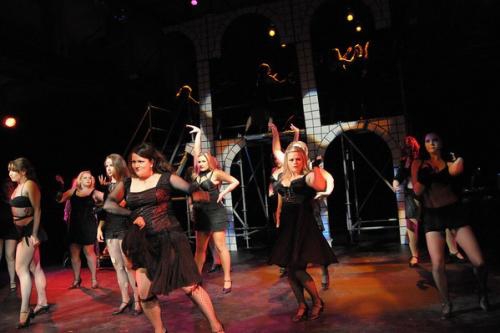 Mike MacKenzie is no stranger to the stage. An honours alumni from the Performing Arts program at George Brown College in Toronto, he has made a living acting, writing and directing since he graduated in 2005.

Upon moving to Vancouver from Toronto just over two years ago, this multi-talented thespian has focused mainly on directing and producing. In the process, he has amassed an impressive resume, including directing A New Brain, which was nominated for an Ovation Award for Outstanding Musical Production last year.

It was while working on A New Brain with the local theatre company, Pipedream, that MacKenzie was approached to direct the musical Nine, to which he enthusiastically accepted.

“I was honoured when the board of directors of Pipedream approached me about directing [Nine], and immediately said yes. I was immediately interested in it - not only because I knew what a challenge would be, but because it is such a beautiful show.”

Currently playing at Performance Works on Granville Island until June 6th, Nine is based on Italian Filmmaker Federico Fellini's 8 ½ and follows Guido Contini (Brian McBride) as he attempts to create his next film masterpiece, not to mention balance the numerous women in his life.

The host of women, twenty-three to be exact, give the show its spice and in the Vancouver production include performances by Kathy Fitzpatrick as Luisa Contini, Madeleine Suddaby as Carla Albanese, Britt McLeod as Claudia Nardi, Tristin Wayte as Contini's mother and Deborah Allman as his producer.

As of late, this musical has made its mark thanks to the show's box office debut directed by Rob Marshall and starring an uber-famous cast including Daniel Day Lewis, Dame Judy Dench, Sophia Lauren and Penelope Cruz, to name a few.

While this musical's recent popularity might have meant added pressure for the director, neither Mackenzie's creative vision or confidence was swayed by Hollywood hype.

“It's hard not to pay attention to the movie - but I sought inspiration from Fellini's 8 1/2, the film that the musical is based on rather than the recent movie musical adaptation,” he explained.

So just how exactly did he go about coming up with the vision for the show? By doing the obvious of course, and turning the play on its head, so-to-speak.

“When I first read a show prior to directing it, I come up with the ending first - that final image that the audience will be left with is the most important, I think. We can then know (or figure out) how to get to that final moment.”

As for the concept, he kept it simple.

“The set is bare bones, and that's the way I wanted it. There are dozens of different scene locations, and so if we tried to change the set every time, the show would just drag on - and so we've gone simple with it.”

With what he described as a talented cast who will wow, a 10 piece orchestra and beautiful score, not to mention only three shows left at Performance Works, MacKenzie has big aims for what he hopes remaining audiences take away from the production.

“I hope that the audience is challenged in the way that they live their own life - and that the show will foster discussions and thoughts following it.”

As he then went on to add, “I think everyone who comes will leave with a different perspective on it, and that's the exciting part of doing a show like this. The characters in this piece are very real, and so I think each member of the audience will be able to relate to someone or something in the show.”

I think MacKenzie might just be on to something with his last comment. There must be a little something for everyone, as so far the production has nearly sold out every performance!