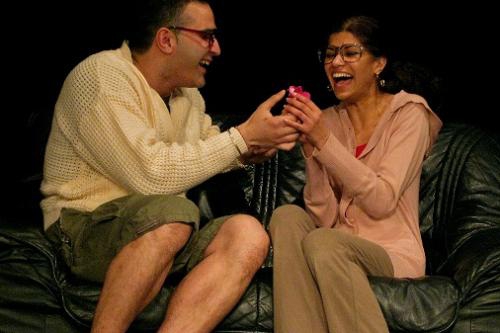 Since forming Bollywood Shenanigans, Munish Sharma and Leena Manro have written and performed over two-hundred sketches.

This week they are adding to their already impressive resumes with the best-of comedy show I Can’t Believe It’s Not Butter Chicken taking place at CBC Radio Vancouver at 700 Hamilton Street from Thursday, May 13 until Saturday, May 15, 2010.

A compelling mix of sketches influenced by everything from Saturday Night Live, Bhangra, to classic Bollywood films and Western pop culture (i.e., Richard Simmons), the best-of I Can’t Believe It’s Not Butter Chicken is a high energy, full-length sketch comedy show that challenges cultural stereotypes through jokes, dance and music.

Laugh-until-you-cry hilarious, the talented and committed cast leads the audience through a range of scenarios, including Bollywood musical numbers, relationship dramas, yoga and unexpected sexual innuendos, tied together with Dance-o-grams and Bollywood show tunes.

Together, this collection of sketches creates a diverse, meaningful and engaging dialogue about South Asian culture, through a collection of memorable characters such as Typical Brown Girl and Dirty Auntie.

While the show is brimming with provocative but good-natured naughty jokes, it is also full of poignant moments and soul, touching on important issues such as spousal abuse, terrorism and interracial relationships.

"It is important to be able to talk about real things," explained Manro when asked about why she feels it is important to include heavier topics in the otherwise light-hearted show. "This propels us to continue writing and helps us feel like we are doing something that's good and important," she added.

In fact, the multi-dimensional aspect to their sketches as well as Manro and Sharma’s comedic timing was so dead-on during Wednesday's preview show, that it was hard for me to believe, after they and the rest of the talented cast made me laugh and think (at the same time) for nearly two hours straight, that this dynamic duo are relatively newcomers to the world of sketch comedy.

It wasn’t until last year when they met after moving to Vancouver (they kept bumping into each other everywhere), that they became friends and began working on their first I Can’t Believe It’s Not Butter Chicken show.

With an impressive number of performances behind them, neither Sharma or Manro are worried about running out of ideas, and after spending an hour speaking with them last week, I wouldn't be too worried if I were them, either. The two left me in stitches with their antics, completing each other's sentences and entertaining with their impromptu punch-lines.

Instead, they are confident about their abilities and believe that their strong friendship, trust and optimism will carry them through what will no doubt be long-lived acting and sketch comedy careers.

“Our strength is that we think alike and that’s what works best for us. We can always see what each other is talking about, so there is always a realm of possibility, that is why we are able to create something so quickly,” said Sharma.

“We trust each other very much. It is very valuable.” Manro added.

And the secret to their hilarious-ness? “I think when we write something and we both laugh - that’s a winner," Manro said with a giggle.

It seems as if the future has great things in store for Manro and Sharma, who are planning an Alberta tour of their show this September and dreaming big, with hopes of one day turning the success of I Can’t Believe It’s Not Butter Chicken into a television series.

With a lot on the horizon for Bollywood Shaningans, make sure to catch the show before this hot show flies the coop for good.

Don't delay on buying tickets either, as all evening performances are sold-out with only Saturday Matinee tickets available at: www.ticketweb.ca