And thanks to VIBC's City of Bhangra festival, the city is  on its way to becoming the Bhangra capital of the world 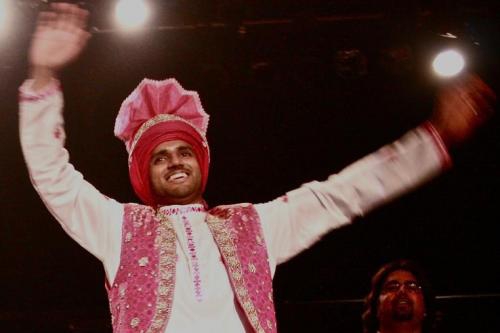 This Bhangra dancer was one of many talented performers who took part in the music and dance show RePercussion at the Vogue Theatre on Saturday, May 1st.

So just what is Bhangra? Originating in India and Pakistan it is an art form that encompasses expression, movement and dance. Once performed by Punjabi wheat farmers to pass time while working in the fields, today it is performed around the world as a celebratory event. But last Saturday night, an audience in Vancouver grooved together to a Bhangra beat at a sold-out performance of RePercussion at the Vogue Theatre on Granville Street. It was a symphony of world music with drumming and dance, and the event, which was hosted by the spirited Dean of Music at Vancouver Community College Sal Ferreras, kept the audience dancing and Bhangra-ing late into the night.

Thanks to performances by the talented group who played everything from a traditional tabla (an Indian percussion instrument) to Brazilian percusion, piano and taiko drums, the show was contemporary ethnic and genre bending fusion at its finest. Before long everyone, security and staff included, couldn't help but tap their feet and bob their heads to the catchy rhythmic lines and incredible beats.

The performance not only marked the start of Asian Hertiage Month in Vancouver, but also began  an impressive lineup of performances that are part of the 6th Annual City of Bhangra festival, hosted by the not-for-profit organization Vancouver International Bhangra Celebration (VIBC).

Started in 2004, when a group of friends came together to form VIBC and host Vancouver's first international Bhangra competition, the City of Bhangra festival has made it its mandate to educate and entertain.

In the last six years VIBC has come a long way and the festival's success shows no signs of stopping. It began as a one day event, but this year the festival is  nine days long, and larger than any of the directors could have imagined when they started it.

“We obviously had dreams and aspirations of the event becoming a huge festival, but I have to admit we, in all honesty, sit around and talk about how [the festival's growth] is unbelievable,” said VIBC Communications Director and founding member Sukhi Ghuman.

This year's festival boasts an diverse lineup of artists, a free outdoor concert, panel discussions courtesy of the University of British Columbia and the University of Fraser Valley as well as the grand finale: a Bhangra competition on Saturday May 8th at the Queen Elizabeth Theatre.

Together with the help of sponsors, artists and volunteers, VIBC hopes it can continue with the festival and unite the local community while working towards making Vancouver the Bhangra capital of the world.

"It is our goal as Canadians and especially as Vancouverites to use this art form as a beacona and a siren to bring together people from all walks of life as one community in this beautiful city,” explained VIBC Chair Mo Dhaliwal, before show.

"We want people to explore their city and celebrate culture and participate in the art form."

If RePercussion was any indiciation, the city has a lot to celebrate in the week ahead. Ghuman wasn't kidding when she said Bhangra was colorful and infectious and admittedly I, like many that saw the show last night, have caught Bhangra fever.

In fact, I am so enamoured with Bhangra that I have decided to attend the free outdoor Bhangra concert on the grounds of the Vancouver Art Gallery on Friday, May 7 from 5-10pm, too.

Featuring five hours of energetic performances, and the Canadian debut of Anita Lerche, the first ever non-Punjabi artist to release a Punjabi solo album. Lerche is   a singer who can reputedly perform in fourteen languages, so the concert is sure to entertain.

With more projects and partnerships in the works, including an Art Exhibit at the Surrey Art Gallery and an exhibit at the Museum of Vancouver, both scheduled for 2011, the City of Bhangra festival and VIBC are  on their way to reaching their goal of world Bhangra domination.