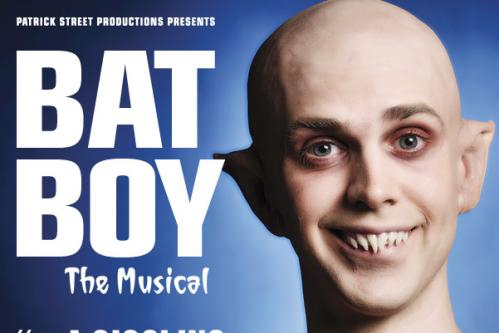 "As far as musicals go, it's been the role of a lifetime, said Scott Perrie, who plays the lead role of Bat Boy, a feral half-boy, half-bat creature, discovered in a cave in a small West Virginia town.  "It allowed me to get in touch with my inner beast," Perrie said.  After three weeks of rehearsals, Perrie said he mastered the role. "I let it take shape on its own. I did research on bats and other creatures. It's a lot of fun. I just let myself go there." Perrie said he meditates to get in touch with his "inner beast."  His body moves like an animal, he even hangs like a bat upside down and sings at the same time, constantly playing the line between animal and human---as do the Southern Christians around him. His presence calls their humanity into question at every turn.

This story could just as easily have taken place in a very small Canadian town as in the American South. The characters are quirky,  colorful and unexpected.  They're both absurd and utterly real in their cross-dressing, cliche busting, gender-bending portrayals of the epic personalities that emerge within the claustrophobic intimacy of small-town communities.

After Bat Boy is discovered, he is captured and brought back to town in a gunny sack and dumped at the house of the local veterinarian to be "put down." But the town is divided over the Christian righteousness of this act.  "You cain't just let him die!" they sing.  The plot unfolds as the citizens sway between lynch mob and Christian revivalists.

The musical seems a parody of musicals themselves. The songs were wonderfully campy, mocking and moving at the same time.  Perrie gave a compelling and convincing interpretation of Bat Boy, mesmerizing the audience with his gut-wrenching anguish as he confronts the curse of his half-human, half-bat condition.  Other outstanding performances were given by Katey Wright as Shelley, the wife of the veterinarian who takes him in, and her daughter, Meredith, played by Bree Greig, who loves him.  Also strong were Scott Bellis, the doctor and Katie Murphy in her roles as Ron, Mayor Maggie, and Clem. Matt Palmer and Ian Rozylo lent charm with energetic supporting roles. The players at Patrick Street Productions distinguish themselves with the strength of their vocal performances.  The costumes, designed by Amir Ofek, were surprising and fun.  The set design incorporated slides, films, and tabloid newspaper parody and was very effective.

The show will run for two weeks.  For tickets, click here.  Patrick Street Productions is a not-for-profit, artist driven theatre company led by Artistic Producers Peter Jorgensen and Katey Wright.  They produce contemporary musicals that have never been professionally produced in the Metro Vancouver area.