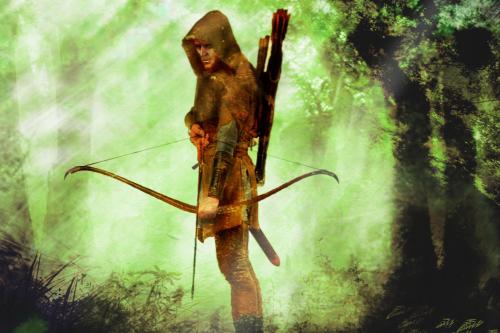 The Merry Adventures of Robin Hood based on the classic legend Adapted by Jeff Pitcher.

From the playwright who wrote Carousel Theatre's hit production Peter Pan, we are proud to present a rollicking comedy for the whole family. The classic legend of Robin Hood comes to the Waterfront Theatre this Christmas. Hidden deep within Sherwood Forest, he steals from the rich, gives to the poor, and leads his band of Merry Men in an action packed adventure against the evil Sheriff of Nottingham and his greedy quest for power. Join Robin Hood, Maid Marian, Friar Tuck and Little John as they fight to protect King Richard's throne!

Director Stephen Drover is the Artistic Director of Vancouver’s Pound of Flesh Theatre Company and is fresh off directing the acclaimed staged reading of The Last Days of Judas Iscariot (with Pacific Theatre and Pound of Flesh). Stephen is the recipient of the 2007 Ray Michael Award for Outstanding Body of Work by an Emerging Director, and also won a Jessie Award for Skydive (Large Theatre- Direction, RealWheels).

Artistic and Managing Director Carole Higgins has been a long-time fan of Stephen’s work after seeing his innovative production The Bond several seasons ago. Stephen has worked with playwright Jeff Pitcher on numerous projects at Theatre Newfoundland- Labrador, where Jeff is Artistic Director. “Robin Hood is the perfect adventure in which to reunite these comrades!” Stephen is excited about the project, saying "Robin Hood is a true action hero. He reminds us who the good guys are, sticks up for his friends, shoots arrows, swings a sword, busts out of prisons. And, most importantly, he believes in himself. But the best part is that he has lots of fun doing it!"