Hershel responds by taking off his face-rag and cleaning up the blood, exposure be damned. #YOLO

Next we see Hershel comforting Glenn, who's understandably depressed. I don't quite retain what Hershel says, it's more you-gotta-have-faith-a-faith-a-faith stuff. Writers, please don't let these conversations become the "Where's Carl?" of S04.

I did it, guilty as charged

Rick confronts Carol, and not just about the water pump incident. He asks, "Did you, uh, kill Teen Wolf's mom?" 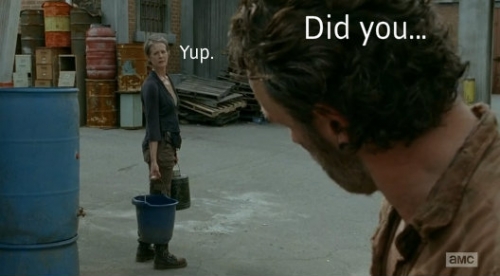 Okay, do you think Carol really did it, or do you think she's covering for someone else? What if one of Redshirt Daddy's girls took Carol's lessons too close to heart and actually killed Teen Wolf's mom and that other guy; and then Carol covered it up? Credible theory, or am I just a sick, sick bastard? I don't even know anymore.

The zombie apocalypse so fascinating not just because you don’t have to set an alarm and commute. Well, that’s part of it. In a larger sense, we’re fascinated by the opportunity to hit a worldwide Reset button. No matter who you are, no matter how badly you’ve screwed up, you can be somebody brand-new tomorrow.

You don’t have to face the music for that report you screwed up, or that order you got wrong. No more impatient customers. You don’t have to worry about staying inbox-zero, or about that job interview. If something tries to eat you, you stab it in the head. Simple.

Also, we all kind of see ourselves as freaks. Outcasts who barely pass as normal. Come on, admit it. In a world where society has gone *pfft*, none of that matters. Everyone starts over from Level 1.

This dynamic was previously most clearly depicted on “Lost”. John Locke was a survival fantasist, and all those skills he learned in preparation for his walkabout made him the MVP of the island. This has been borne out in “The Walking Dead” by Daryl, who found redemption in his separation from his toxic (yet admittedly awesome) brother.

Strangely enough, Carol is in better shape surrounded by the shambling flesh-eaters than had she just stayed with her family in suburbia. I reckon she’d be dead by now if left long enough to her husband’s mercy.

What about Michonne (Graphic novel readers know a bit of her backstory, so I’m thanking you not to give anything away)? Was she a katana expert before the dead rose, or did she pick up that particular skill as she went? (Incidentally, I googled "Michonne awesome" and found this.)

Carl’s obvious psychopath indicators would have been even more blatant in a zombie-less world: he’d be torturing cats or something.

As for The Governor, he confirmed the notion that antisocial tendencies would position one to survive the death of society. The Governor is on an Axl-Rose level of both sheer single-mindedness and antagonism toward his colleagues.

Actually, Axl Rose’s my-way-or-the-highway attitude would position him to thrive in the zombie apocalypse. The only two beings left on earth would be Axl Rose and Zombie Steve Jobs. 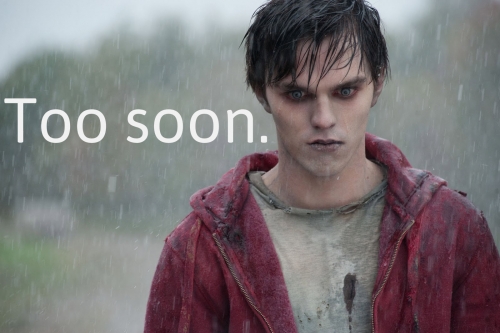 This all gets kicked in the nuts, though, if your entire rebirth metaphor is screwed up by a garden-variety virus. Then we get back to something like Cormac McCarthy's "The Road", which leaves one with the impression that those who survive a cataclysm will just be marking time until they, too, are dead. The survivors haven't really survived in any meaningful way; they only put a few ticks back on the clock. 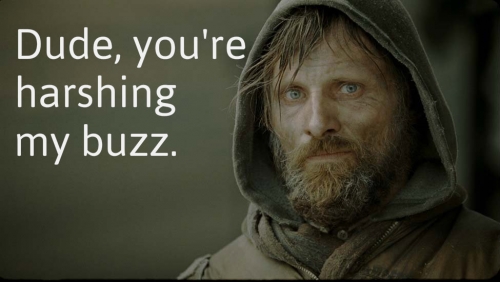 Oh, this week's episode of "The Walking Dead"? We could have had a full hour of CSI: Zombieland intercut with Operation: Animal Hospital. Instead, S04E03 just went back to S02-era "The Walking Dead": a series of scenes that felt like riffs off one another, before getting to the juice of the episode within the last ten minutes.

I give "Isolated" two judiciously-plucked elderberries out of a possible five.

What do you reckon? Am I too harsh on the "Walking Dead" writing team? Will the Fellowship of the Challenger fail? Will Carol graduate to a chainsaw?

Hit up the comment field below, but please avoid spoilers.

I won't be whacking walkers for the next few episodes, as I'll be covering the International Robot Festival in Tokyo. Seriously. If you like robots, keep an eye on the Vancouver Observer over the next few weeks.