The Fellowship of the Dodge Challenger

Tyreese tries to comfort Sasha in her time of despair, and ends up talking himself into joining Operation: Animal Hospital. 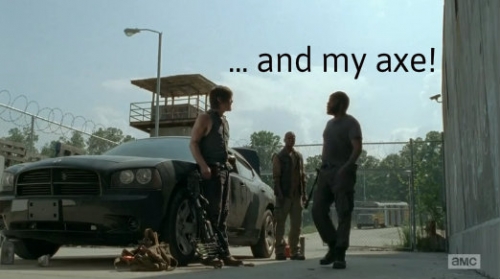 On his way to grab his stuff, Tyreese corners Carol, tasking her with watching over Sasha. She agrees, and Tyreese goes on his way.

Now alone, Carol has a small breakdown, knocking over a cistern and sitting down in tears. Oh, yeah, I bet she's the one who killed Teen Wolf's mom. I also notice that she's graduating to ever-more-badass knives. 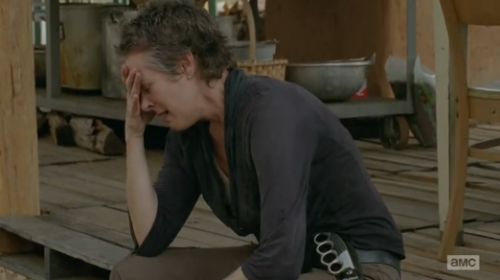 Maggie catches Hershel as he tries to sneak back through the prison. So busted. She's livid that her father is risking the Violet Flu (and the walkers). Rick isn't exactly thrilled, either.

Hershel busts out the speech he's probably been preparing the whole day, saying how every moment is life-endangering, so they risk their lives just by breathing, they may as well use that breath to help each other.

Maggie has no comeback to that, so she throws open the door for her dad as he ninjas up to enter the isolation area. 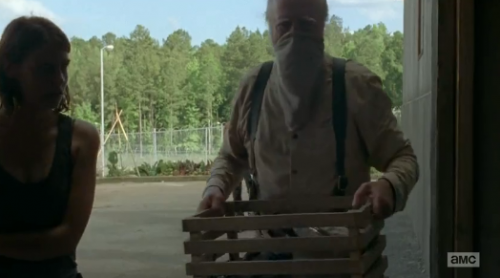 Maggie is breaking the news to Beth that their dad has gone into the isolation wing to distribute elderberries. This is really testing the limits of Beth's we-don't-get-to-get-upset mantra. 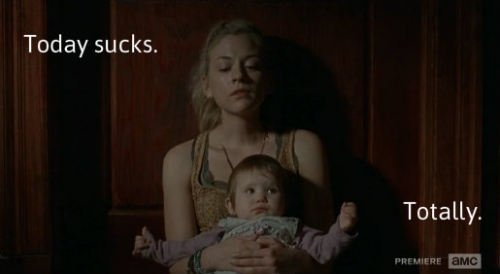 Rick is finally investigating the death of Teen Wolf's mom. He's communing with the crime scene like in Mad Detective. He spots something in the doorway... a bloody handprint, smaller than his. 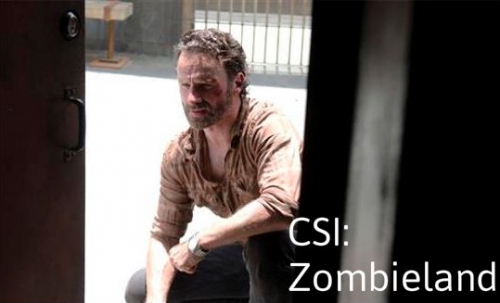 Carol decides, screw it, she's gonna go unclog the hose anyway. The bike-wheel noisemaking apparatus is keeping the walkers occupied as she mucks around with the nozzle. However, she's a bit distracted, probably wondering what happened to Agent Coulson between "The Avengers" and "Agents of S.H.I.E.L.D.", because she doesn't notice a convergence of zombies until it's nearly too late. 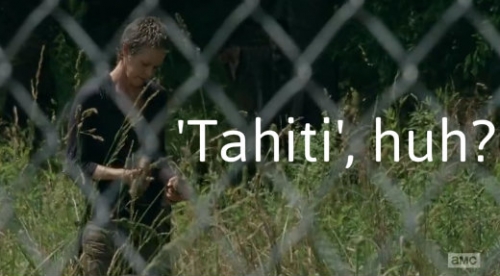 Luckily, Rick comes to her rescue, and they fight their way back inside the prison fence together.

Operation: Animal Hospital is underway. Daryl tells Michonne that, had the trail of The Governor not gone cold, he'd be out there hunting for him as well. Then he turns on the stereo to play a CD. Hang on, there's something on the radio... 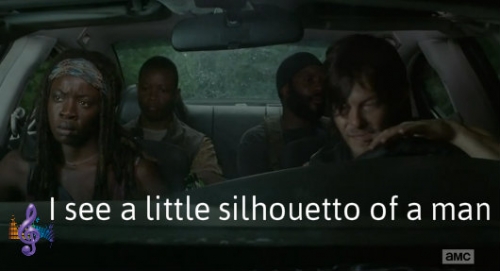 It's voices. What are they saying? "Sanctuary"?

As they listen, Daryl takes his eyes off the road for a sec. This of course means he'll nearly hit a walker. Or, in this case walkers. Hundreds of them, if not thousands. Our heroes find themselves surrounded by a massive herd of the grasping undead.

Turns out that, when run in reverse, the Challenger's rear wheels  get stuck in mountains of zombie flesh. Dodge will have to add a warning about that to the owner's manual. 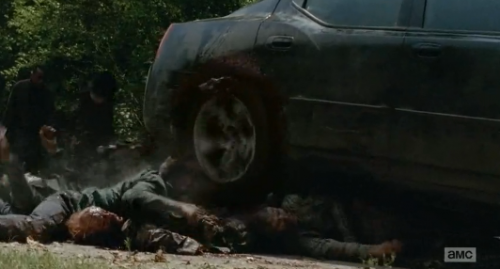 Daryl, Michonne, Bob, and Tyreese will have to run for it.

Unfortunately for Tyreese, "run for it" means "sit in the back seat and fret for ages, and then get out of the car to hack at walkers and scream at them." That goes about as well as you'd imagine, and Tyreese is swarmed by the undead as the other three make it to the woods.

With Bob getting more than five lines, you knew this was coming.

Wait, no! Tyreese managed to fight his way through the zombie swarm and rejoin the Fellowship of the Challenger. His death wish was more of a wish for the walkers' deaths.

The Fellowship lives to fight another day, or at least for another ten minutes.

You got to hoooold on, for one more day

Hershel is tending to Dr. S., who's about two seconds from death. Maybe that Lord of the Rings elderberry concoction will buy him some time, help him to be the last Woodbury refugee standing? Dr. S. coughs a mist of blood into Hershel's face. 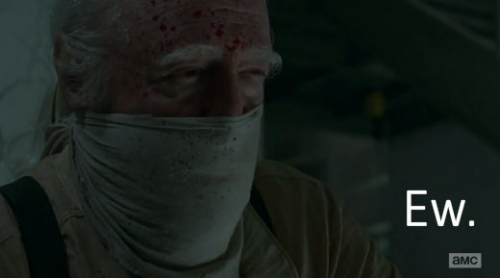