Daryl gets ready to saddle up, and Michonne immediately volunteers to join him, while delivering a dig at his personal hygiene. Hershel himself volunteers, but Daryl points out their atrocious track record when it comes to supply runs: "It's always the same. Sooner or later, we run." With his artificial leg and correspondingly slow pace, Hershel relegates himself to drawing them a map.

Hershel also suggests using the prison admin building for the children; the rest of the council suggests he reside there as well.

Carol and Rick are pumping water with their cleverly-MacGyvered water system. It's all bunged up, though, clogged with mud from the creek. Carol volunteers to go clean the hose, but Rick says they should put it off until tomorrow.

Rick starts by apologizing, and then by asking if Teen Wolf's mom and that other guy had any enemies. He thinks maybe the perp was acting for the greater good.

For his part, Tyreese isn't buying it: he doesn't think Rick gives a crap about Teen Wolf's mom, or about getting justice. 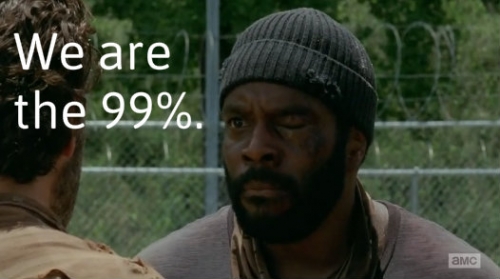 More redshirts are trooping into the isolation wing, coughing up blood as they go. Tyreese eyes each of them as the potential killer.

Meanwhile, Carl is livid about having to go into the admin building with the other kiddies. The silver lining, though, is that he can bring his gun in case one of his peers dies and zombifies. When Rick warns him to only fire if he needs to, Carl replies, a bit too hopefully, "You know I might need to, right?"

Why can't he just learn to enjoy Story Time like the rest of us? 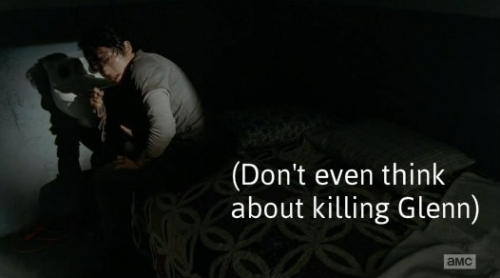 Daryl is getting a Dodge Challenger ready for Operation: Animal Hospital. If it's good enough for Walter White, it's good enough for Daryl. He tells Michonne he's glad she stuck around. He puts in a good word for me, too. Even with Bob joining them, Daryl wants another body for the mission.

We're running out of main cast-members, so that means Tyreese, who he finds down at the doors to Cell Block A. He doesn't want to abandon Sasha, so he turns the opportunity down.

So that's where Hershel gets all his platitudes: motivational posters and coffee mugs! He's sat in an office somewhere in the admin building under a poster reading, "Smooth seas do not make good sailors", contemplating a mug that reads, "Java saves". Okay, so the latter isn't too motivational. Anyway, Hershel thinks to himself, "I totally look like Seasick Steve."

Then he gets up to sneak out of the prison in a little mission.

Carl catches Hershel getting ready to take a jaunt into the woods to be all Lord of the Rings and find soothing herbs. For a second, I think Carl will end up killing Hershel, but no, he ends up insisting upon accompanying Hershel on his excursion.

Carol is shepherding redshirts into the isolation wing, wearing a sort of green ninja mask in lieu of anything actually useful against a virus. Alas, she has to send Redshirt Daddy's daughter into the sick bay, where the remaining redshirts are shuffling around and basically rehearsing their walker routine. The little girl wants Carol to tuck her in. Carol has to handball this one to Glenn, who's already sick; no matter how much it breaks her heart.

And break her heart it does: Carol has a poor track record in keeping her young charges alive.

Meanwhile, Maggie is talking to Beth through the admin-area door, as Beth keeps little Ass-Kicker company. Maggie tells her sister that Glenn is sick. Beth is repeating her mantra of "we don't get to be upset," even as she gets pretty upset.

A walk in the woods

Carl is twitchily standing guard as Hershel picks elderberries. They hear the rasping of a walker, and find a legless zombie leaning against a tree, grasping helplessly at them. Another walker shambles up, its leg caught in a bear trap. It's not Clara from S04E01. 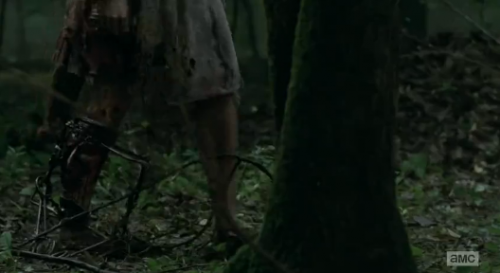 Carl wants to bust some caps in some zombie asses, but Hershel implores him to save his ammo and just enjoy the peaceful sounds of Tree Zombie Bear Trap Zombie. How's the serenity?