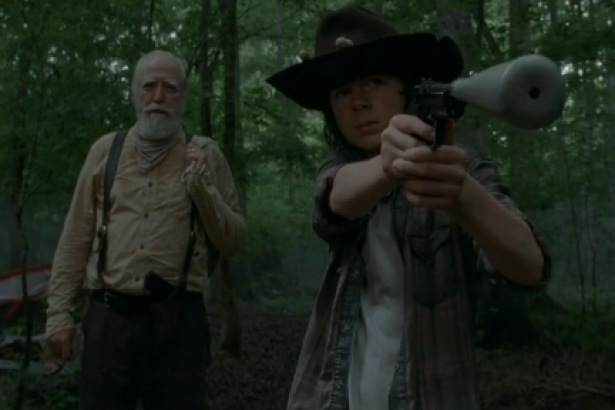 Whom or what do Hershel and Carl meet in the woods? Find out in the Walking Dead S04E03 recap and review.

Welcome back to the Zombie Apocalypse, where featured extras go to die. Here you’ll find the recap and review for “The Walking Dead” S04E03, titled “Isolation”. My digital cable listing sums it up thusly: “A group leaves the prison to search for supplies; the remaining members of the group deal with recent losses.” So, every episode of “The Walking Dead” since they reached the prison.

Okay, so S04E02 wasn’t the deepest episode in the series, but it had loads of gruesome zombie kills, undead Harry Potter, and the return of Rick as a decision maker. We’ve gotten a survivors-vs-walkers episode out of our systems, so now it’s time to get back to the more nuanced aspects of surviving the Zombie Apocalypse. Namely, the survivors dealing with one other. This means Tyreese sleuthing out who killed Teen Wolf’s mom, and dealing with him or her. 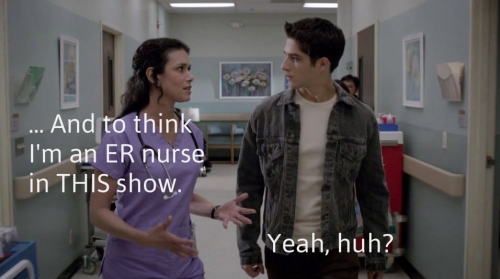 Also, finding out who’s been feeding the zombies, and dealing with him or her. I’m still thinking Carl, since the zombie-feeding took place in the dead of night. The Zombies Are People, Too girls had no sense of shame regarding their adopting the walkers as pseudo-pets.

Will we see the death of the prison democracy and the return of the Ricktatorship, or will the council force a budget crisis to make Rick look bad?

Starting with a gardening scene is so S04E01. Now it's all about starting with a grave-digging scene. Junior psychopath or no, Carl's really good at making grave markets. Glenn and Maggie are also pretty good at digging graves, managing to smile wanly at one another as they do so.

Inside the prison, Dr. S, who really should be wearing a mask, readies his knife for another Violet Flu victim. Was the victim already dead, or is this euthanasia?

Meanwhile, Rick, Daryl, and Carol have caught up with Tyreese. He's seven shades of pissed about the death of Teen Wolf's mom, and he demands answers. Tyreese insists Rick use his police powers to apprehend the killer, unaware that Rick's police powers extend only to sweating profusely and barely maintaining a grasp on his own sanity.

Tempers flare, and even Daryl is unable to defuse the situation. Tyreese unloads on Rick's face. As Daryl restrains Tyreese, Rick responds in kind, following up with some serious ground-and-pound. Carol is like, 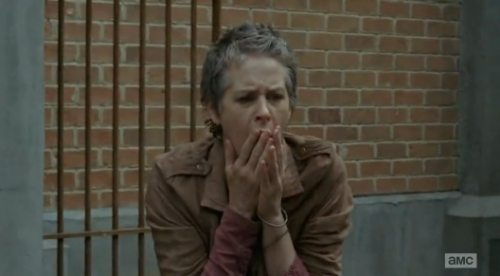 This may sting a bit

Hershel is patching up Rick's sprained right hand, which is pretty banged up, what with the repeated impact from Tyreese's skull. He's also working on Rick's morale, now that the prison community is slowly falling apart.

Even as the survivors are menaced by walkers from without and disease and distrust from within, Hershel compares Rick's little episode with his own brief return to booze; saying that Rick must keep moving forward, blah, blah, blah. He doesn't remark on how Rick managed to find an identical shirt to the one he burned the other day.

Meanwhile, Tyreese, his face a full-on mess, is digging a grave for Teen Wolf's mom and that other guy. Bob comes out to check on him. Tyreese refuses medical attention until he's buried his lady love so Bob grabs a shovel and helps Tyreese dig.

Glenn is pressing Hershel for reassurance of the prison's future, sick of just digging graves. Hershel responds by saying that everything might still be okay, but he's interrupted by Sasha, who's having an ominous coughing fit.

Sasha, whose condition has deteriorated rapidly over the course of about 28 seconds, makes her way through Cell Block A. There's a redshirt coughing up blood, and another who's already died and come back as a walker. Then there's Dr. S., who's not looking too hot himself. See? Should've worn a mask. #HateToSayIToldYouSo

Prison council meeting: Hershel exposits that all of the redshirts who survived the Harry Potter attack is now infected with Violet Flu. Cell Block A is now the isolation wing, conveniently pre-stocked with patients. He says that there's a veterinary clinic about 50 miles away, which should have antibiotics they can use.