Defending the prison from within and without. Hard choices, sharp blades, and some amazing music this week in "The Walking Dead" S04E02. Join us for the recap and review.

Rick replies, "I got another plan, involving dirt and cucumbers." 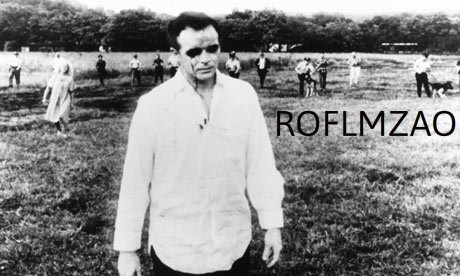 Carl has been trying to demonstrate to his dad that he is not, in fact, a psychopath. This is so he can get his gun back. ಠ_ಠ

Then we hear gunshots, as Harry Potter and the newly-turned walkers chow down on all the redshirts. Rick, Daryl, Glenn, Tyreese, Carol, and every other character who's been name-checked immediately swoop in to whip some walker ass.

Outside the fence, Michonne hears the commotion and heads back. Carl mans the gate, letting her back in. Unfortunately, a few walkers follow her. Michonne gets knocked down while fighting three walkers at once, injuring her ankle in the process. Maggie and Carl sort out two of the walkers, with Carl firing Maggie's rifle.

Maggie notices that the other walkers aren't following them, preferring to cluster up against that one particular patch of fence.

Hell in a cell

Cell Block D is a scene of full-on carnage. Children shrieking, walkers hissing, survivors yelling. The series regulars are getting busy with knives, shotguns, boots, and crossbows as redshirts get busy dying horribly.

Carol brings one of the redshirts into an empty cell and prepares to amputate his bitten arm... until she notices his bitten neck. 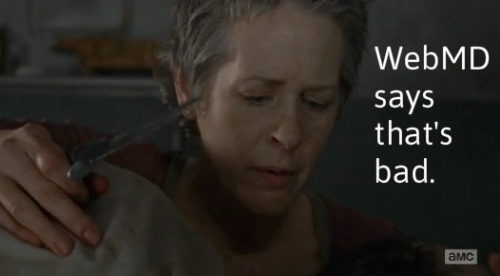 The survivors start clearing out the bodies, as well as brain-stabbing the dead who haven't yet turned. It's a dirty job, etc.

Carol is keeping the bitten redshirt company before he dies, and goes to get his kids so they can say goodbye. Because he asks, Carol also promises to look after them once he's gone. Clearly this guy has never heard of Sofia. 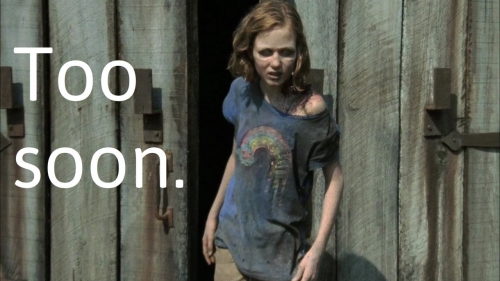 Meanwhile, Rick, Hershel, and Daryl quickly figure out that Harry Potter died of the Violet Flu and triggered the slaughter. Doctor S. determines that it's probably a flu-like disease, because, duh, Harry Potter had flu-like symptoms before turning into an eye-bleeding zombie monstrosity. Similar walkers have been spotted along the fence.

Carol brings in Redshirt Daddy's daughters. The little girls are like, "Daddy! Daddy! Carol, get the doctor!" Carol says, "Sorry, hon... your daddy's a redshirt, and this is what happens to redshirts. It's a circle-of-llfe thing."

Carol promptly asks one the little girls to demonstrate those Story Time knife skills by stabbing her own father's brain out. The eldest volunteers. 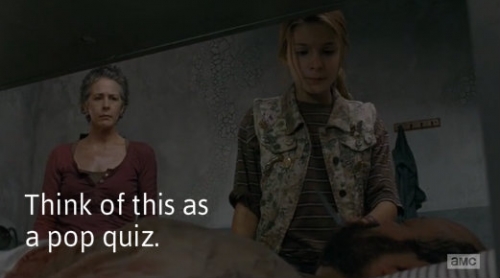 She just can't do it, though. While the older sister cries like, well, like a little girl, the younger sister tries to calm her down. Repeating "look at the flowers" doesn't help too much. Partly because the flowers aren't much to look at. Meanwhile, Carol skewers Redshirt Daddy's brain. For the record, though, she looks very, very sad about it.

The prison's council meets to talk about the shit-show that they just experienced. The next move is to quarantine anybody that seems sick in Cell Block A. Okay, so Cell Block A happens to be Death Row... but so was Cell Block D.

So anyone who's feeling a bit under the weather will be isolated from the rest of the group.

That includes Teen Wolf's mom, who is now coughing a bit. 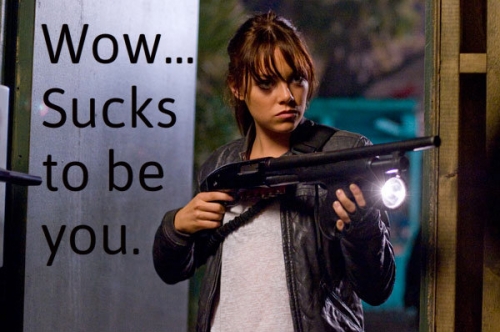 Out at the fence, Redshirt Daddy's daughters are staring at the walkers and the little yellow flowers. Carol joins them for a pep talk. But it's a Carol pep talk: "Honey, you're weak." 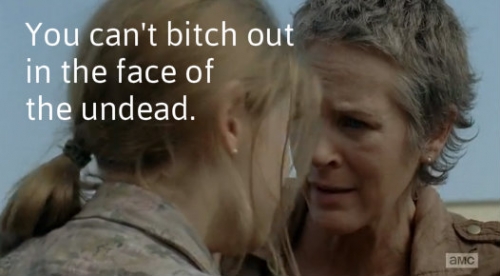 Between that and her little sis calling her "stupid", big sis is finally getting over her zombies-are-people-too phase.

Meanwhile, we see that Daryl even looks cool when he's digging graves for infected corpses. He take a break to reassure Rick that he's not a useless moron. Which is actually true.