Defending the prison from within and without. Hard choices, sharp blades, and some amazing music this week in "The Walking Dead" S04E02. Join us for the recap and review. 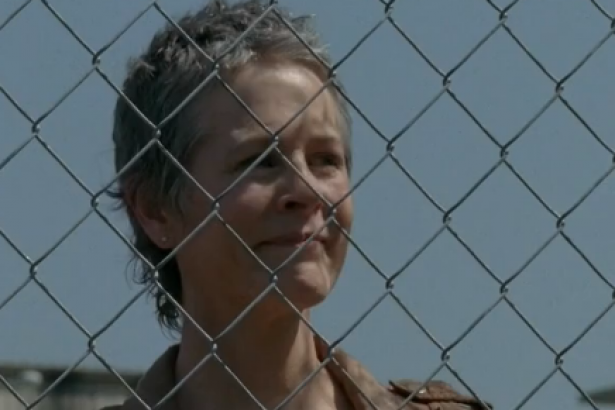 Welcome back to the zombie apocalypse, to an almost-abandoned landscape where somebody goes around washing all the Hyundais. Here you'll find the recap and review for “The Walking Dead” S04E02, titled “Infected”. My digital cable listing describes S04E02 as follows: “The group faces a new enemy; Rick and the others fight to protect their hard-won livelihood.” So, every episode of “The Walking Dead” ever.  I like to think that the title is a shout-out to “28 Days Later”, a zombie movie that wasn't about zombies. 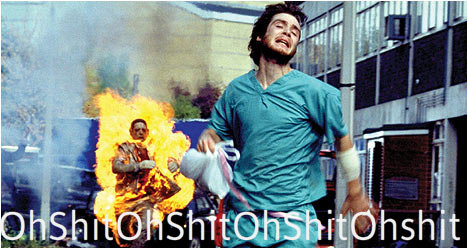 Obviously S04E02 will pick up after the death and subsequent undeath of Harry Potter, who may or may not have contracted a lethal virus from Violet the Pig. 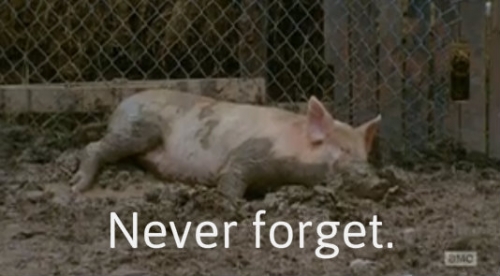 Not for nothin’, but where the hell was Hershel, who once upon a time put “veterinarian” on his tax returns? Fine, let’s not dwell on the past, but instead look to the future. Spoiler alert, of course.

Harry Potter and the Prisoners of Zombieland

Out at the fence, someone with a flashlight (I bet it's Carl) is feeding a terrified rat to a walker. PETA is gonna freak the f*ck out.

Back in the prison, Tyreese is making out with Teen Wolf's mom before he gets cock-blocked by Zach's ghost. He can't get the now-infamous Zombie Rain incident out of his head. To be fair, it was pretty spectacular. Anyway, Tyreese salvages the moment by singing "I've Got You Under My Skin" to his lady love, thus stepping into legend in my book.

No lie, I actually stood and saluted the screen. 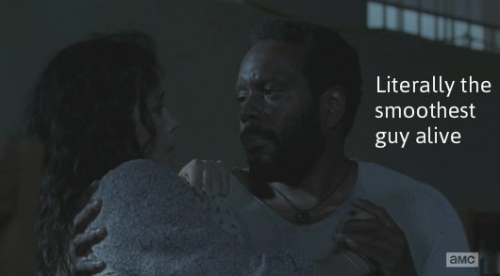 Teen Wolf's mom puts on the brakes, though: she doesn't want to move this new relationship too quickly. Tyreese is cool with that, and they go separate ways.

On the way to the toilets, Teen Wolf's mom's flashlight goes on the blink. That's horror-movie for "something awful is about to happen".

Teen Wolf's mom isn't afraid, since her kid is a werewolf in another series: she's used to the supernatural. She heads back out, walking and not running, because she's... Teen Wolf's mom.

Only after she leaves the bathroom does Harry Potter rise and shamble out into the hallway. 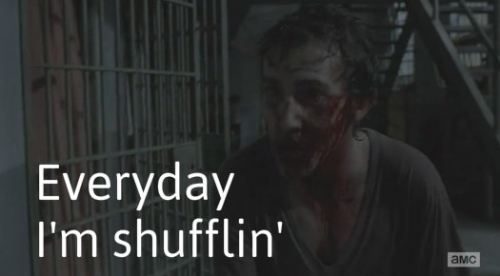 Oh, no, he's following her back to Cell Block D, he likes Melissa Ponzio as much as I do... no, wait, he skips her bunk and creeps into some rando redshirt's cell. Harry Potter then goes to town on the dude's neck.

See, this is why I watch "The Walking Dead". I'm also wondering, though, why the prison residents don't close their cell doors at night. You, know, what with the Zombie Apocalypse and all. The doors wouldn't have to be locked; just so long as you'd need human coordination to open them.

Rick wakes up Carl, who I bet was up late feeding the walkers, for another round of Farmville. Meanwhile, Zombie Harry Potter is chowing down on a dude's guts and nobody's noticed yet. Harry's victim stands up, sans guts, and gets down to business. The business of eating people.

Glenn and Maggie are on duty in the guard tower. Glenn goes to wake up Maggie, but first, since his smartphone would have run out of juice before S01E01, he pulls out a regular camera to snap an embarrassing photo of his fiancee. In case you're wondering the camera is a Holga Diana with a Polaroid back.

This is the sort of sweet moment that makes one fear for their safety. Anyway, as Glenn climbs down, Maggie notices that the walkers are all clustered at one little patch of fence.

Michonne is heading out to Macon, promising to bring back cool stuff for Carl. Father and son get down to some serious farming. If not for the rasping zombies, would they be icked out by the worms? Could the worms have something to do with the sick pigs?

Carl wants to go sort out that walker cluster at the fence; dude just craves closeness to those things.