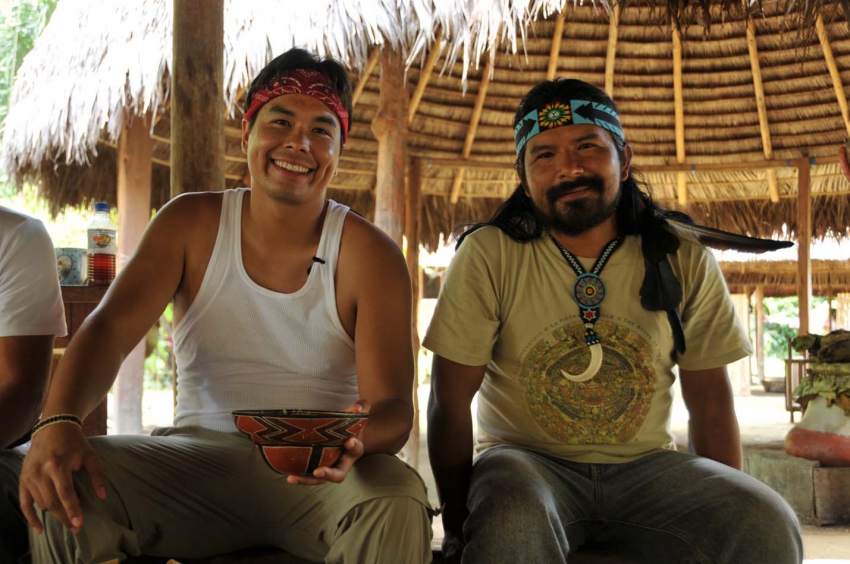 Native Planet host Simon Baker (left) has his first taste of Chicha, the ceremonial drink made from fermented yucca that connects indigenous cultures throughout the Amazon. The Sarayaku community, led by Marlon Santi (right), has been waging a 20-year campaign to keep oil wells off their territory, located deep in the Amazon rainforest of Southern Ecuador.

Native Planet, a new six-part documentary series takes audiences to the front lines of an Aboriginal-led fight for Mother Earth.

Last week, the series kicked off with the story of a Maori tribe’s effort to breath life back into a New Zealand lake decimated by industrial pollution. Subsequent episodes focus on the expansion of pipelines in Canada, the fallout of uranium pollution on the Navajo Nation, the movement to re-claim Hawaiian sovereignty, the devastation of the Amazon and the industrialization of native lands in northwest Australia.

Hosted by Simon Baker, the series airs every Wednesday at 7:00 p.m. nationally on the Aboriginal Peoples Television Network (APTN).

“Native Planet takes our audiences behind the headlines to understand why First Peoples are opposed to global warming and large scale resource extraction on traditional native lands,” says Baker.

“Native Planet is ultimately about economic versus Aboriginal values, where we confront issues that may soon determine the balance of humanity on earth,” says co-producer Denis Paquette. “First Peoples have always lived in connection with the natural environment and in a time of unprecedented environmental change, it’s time we consider those values,” adds co-producer Carmen Henriquez.

Here is a sneak preview of episode two, featuring the Cofan Tribe in Ecuador's Amazon rainforest and their fight to protect their land and water from oil pollution:

Is Once Upon a Time's re-imagining of classic fairy-tale characters a feminist feat of modern TV?
Sarah BurkeDec 20th, 2013
Speak up about this article on Facebook or Twitter. Do this by liking Vancouver Observer on Facebook or following us @Vanobserver on Twitter. We'd love to hear from you.