Jamie Foxx hosted an episode of Saturday Night Live with some calling it 'the most racist SNL ever'. Did Foxx take it too far with his 'kill all the white people' comments or is this just acceptable comic fodder? 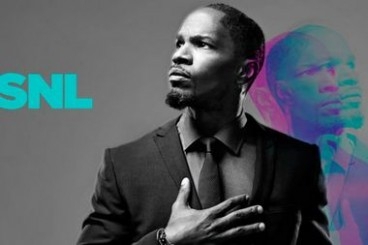 Actor, singer and comedian Jamie Foxx returned to SNL on Saturday for his second time. His much hyped about appearance even had Oprah Winfrey tweeting her excitement to watch Foxx's appearance on the show.

His opening monologue began with a segment called 'How Black is That?' which is where Jamie Foxx's racially charged comments began. He came out boasting about his ''all black suit'' stating ''It’s good to be black. Black is the new white". He then went on to promote his upcoming Quentin Tarantino flick, Django by saying “I play a slave. How black is that?” continuing with “I have to wear chains. How whack is that?".

Then Foxx followed up with his most appalling comment of the night, "I get free. I save my wife and I kill all the white people in the movie, how great is that?” said Foxx with a smile as the crowd erupted in applause and laughter.

Immediately after his monologue, however, the Twitter-verse lit up in outrage over Foxx's  comments.

This isn't the first time  Foxx has been accused of racism. In 2009 on his Sirius Satellite radio show The Foxxhole, Foxx and his 'zoo crew' spewed a verbal attack on then 16 year old Miley Cyrus after hearing about her attempt to meet one of her favourite bands at the time. Foxx and his radio crew commented by calling Cyrus a “little white b---h” and encouraging her to “"Get like Britney Spears and do some heroin. Do like Lindsay Lohan and start seeing a lesbian and get some crack in your pipe. Catch chlamydia on a bicycle seat.”

Notably, only mentioning white actresses in derogatory terms, Foxx, who is the father of a teenage girl apologized afterwards on The Tonight Show with Jay Leno saying, "I so apologize, and this is sincere. I am a comedian, and you guys know that whatever I say, I don't mean any of it. And sometimes, as comedians, as we do, we go a little bit too far."

One wonders how Foxx's 'reverse racism' is accepted in America when in 2009 radio host, Don Imus was famously fired after public outrage for his comments on-air during an adult women's basketball game. While commenting on the game Imus called the players “nappy headed hoes” and was fired from his long-time job with CBS. Foxx on the other hand received cheers and applause on Saturday Night Live for saying with a smile, “I kill alll the white people, how great is that?". Is this a case of regular comic fodder or is 'reverse racism' more acceptable in North America?