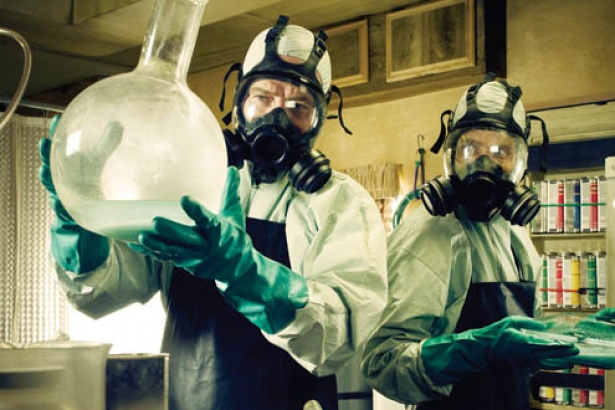 When users smoke meth, the vapor is incredibly condensed. The exhalations are massive displays. They fill a room like a dark cloud.

The first time I saw someone smoke jib, I was astounded. My friend Payoo (now dead victim to a warm gun) blew out a toke that resembled a thick white statue that made its way slowly across the room. The column of smoke stayed completely intact for minutes after.

In my early days, I smoked meth from a moldy test tube, wondering how so much vapour could have come from my lungs.

I wondered why I was so pleased with this, and then it dawned upon me that I'd just inhaled a massive amount of the strongest stimulant known to humanity.  That's why I felt so happy and euphoric about making meth clouds.

These days, I am sitting in detox hoping, praying, with all my heart that this story of meth in my life is not to be continued, however therapeutic my writing on the topic proves to be.

Breaking Bad reflects my own experiences with crystal meth, or "jib" as it's known in Vancouver.

Hollywood's portrayal of the insanity and instability that meth causes in people's lives hits home. No matter how hard a person like Walter White may attempt to keep things under control, eventually life spirals down  until the bitter end comes: prison, insanity, or death.

Take the scene where Jesse is amping really bad on the drug.

In a fit of paranoia, he panics as a mailman comes to the door.

He's hallucinating that it's some biker come to kill him.

The scene made me chuckle and grimace at the same time, as paranoia and psychoses are inherent with methamphetamine.

Methamphetamine is subversive, cunning, and deadly. The unlucky few who find themselves locked into meth addiction are terrorized by the experience.

It's a dangerous endeavor even if you're just manufacturing the drug. Some meth cookers die in the process, falling victims to anhydrous or denatured alcohol poisoning.

Meth takes no prisoners, and on Breaking Bad they show this through Jesse's desperation and the murders that he and Walter commit. They're constantly at risk of capture and prison and death.

I myself have run the meth gauntlet and almost lost when I was stabbed in a territory war.

For those troubles, I gained seven staples in my stomach and 14 stitches in my arm.

Still, you have to take Hollywood with a grain of salt.

I recall watching Jesse and his partner Walt smoking a meth pipe. They lit it and quickly inhaled a dose with as much time spent as one inhaling a cigarette.

They got this scene all wrong. They should have done some background research on a ritual of such integral importance to the show.