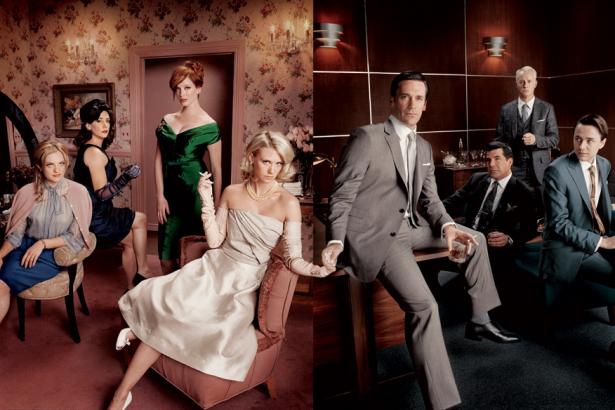 Mad Men's creator Matthew Weiner is mum on spoiling any plot hints before tonight's two-hour season five premiere (6 p.m. PST), but there is no doubt that the new season - opening circa 1965 - promises to be akin to a nuclear experiment. Just as scientists smash atoms into one another to observe the results, history tells us that the elite, insular privilege of 1950s businessmen portrayed in the award-winning and much-discussed show about a New York advertising agency in the 1960s will come crashing into the sexual, racial and military upheaval of the period. How each character comes through it is completely up in the air - season four had already thrown in touchy themes of illegal abortions, the Vietnam war and women's sexual liberation.

Replete with grating but realistic retro-sexism, delightfully authentic attention to historical details from fabrics to whiskeys, and an office full of perpetually adulterous men and their secretaries, Mad Men has become a wild hit since it first aired in 2007.

The show centres around Donald Draper (Jon Hamm), a suave, womanizing creative director and part-owner of fictitious ad firm Sterling Cooper Draper Pryce. He's extremely successful at both sales pitches and seduction - he's mastered infidelity and workaholism to a tee - but under the professional surface, his world is collapsing. In fact, he's not even Don Draper - in his shadowy, enigmatic past, he stole the identity of a fallen comrade in war and has renounced his family.

One of the show's most popular characters in the office is Peggy Olson (Elisabeth Moss), a secretary-turned-copywriter with a close connection to Draper. She's the only woman who's moved up the corporate ladder in the office - and in the previous season, she fell in with the bohemian artist crowd (including a nudist). This may bear fruit as the hippie movement flourishes - we don't yet know.

Mad Men has raised a huge swathe of conversation about everything from its rampant chauvinism to ubiquitous chain smoking and hard drinking - not to mention the struggles and aspirations of its brilliantly written female characters, navigating a world in which they are scarcely welcome.

So far, however, a major missing piece in the show is its near-total lack of characters of colour - unsurprisingly, given the corporate setting and era (there were, it turns out, some ad men of colour back in the day - but not in Mad Men). Those few black people with speaking roles are restricted to white peoples' servants or accessories: an elevator operator, a nanny, and one man's girlfriend who is described as "exotic."

In fact, Francis ignobly fires her black nanny after years of service in the final episodes of season four, over a trivial matter; in past, she had remarked that black peoples' time for equality had not arrived.

The isolation of the white businessmen and their families from the civil rights movement and war in Vietnam is telling of their privilege - but rings true, in so many ways, today. In the so-called multicultural, "post-racial" mindset of today, most Canadians are oblivious to Aboriginal rights movements, white supremacist beatings, or the imprisonment and deportation of migrant families, for instance.

In the Mad Men world, all of this will change as tensions rise in the society around Draper and his colleagues - "a time of almost inescapable social and political upheaval in the U.S: the escalation of the Vietnam War, the early stirrings of the feminist movement, the rise of black power and the explosion of drug culture," to quote a Los Angeles Times review of the new season.

The LA Times quotes author Peniel Joseph (Waiting ’Til the Midnight Hour: A Narrative History of Black Power in America):

“We'd like to believe that civil rights penetrated all corners of America, but it didn't," he explains. “By ’66, everyone in New York City is concerned about the race riots across the country. They are literally front page news.”