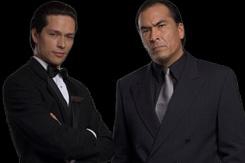 There aren't many shows on television with First Nations characters or concerns. Even fewer have an all aboriginal cast. Cashing In is has both. Centered around a native-owned and operated casino, Cashing In deals with native politics, gambling, and land claims

The acting and writing is strong and many of the characters are well developed. Although the characters are First Nations, the story is strong enough that ethnicity is a non-issue.  Eric Schweig is brilliant as the gruff Casino owner Matthew Tommy, and Wesley French is as equally compelling as his dastardly nephew Justin.

Now in Season 3 on APTN, Cashing In stars Eric Schweig as Matthew Tommy, the casino owner and family patriarch. Supporting cast includes former liberal MP Tina Keeper (who is also a producer), Sarah Podemski, and Wesley French as Tommy’s nephew and heir to the casino. At the end of season 2, famed First Nations actor Gordon Tootoosis guest-starred in one of his last roles before his death.