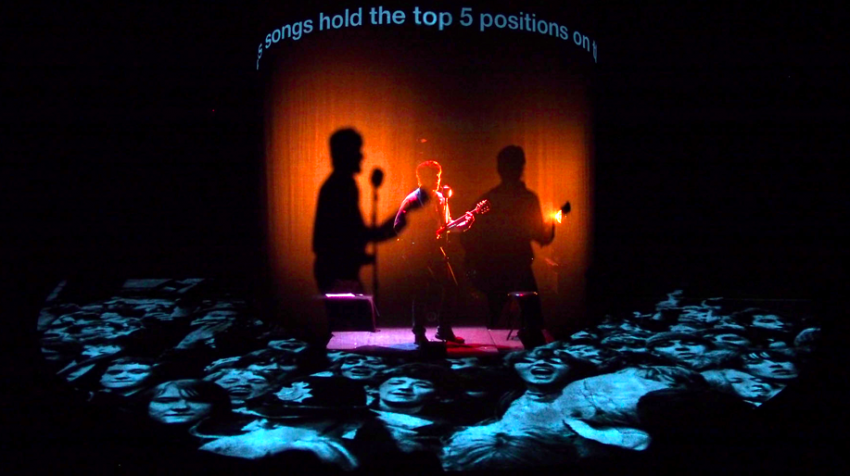 Here I am in a dark room, staring at a dimly lit, translucent cylinder, beguiled by amorphous figures, fleeting shadows and snatches of retro music. It’s all somehow hauntingly familiar, but it took awhile for my aging brain to quite place what the scene recalled.

It wasn't until halfway through Act One of actor/writer/singer/mimic Rick Miller's solo tour de force "BOOM" that the connection finally hit. Of course! The whole set-up is like a giant lava lamp, the psychedelic dorm room accoutrement that hypnotized me (and just about everyone else in my privileged, drug-addled demographic) back in the “swinging sixties.”

What could be a more appropriate icon for Miller's chosen subject, the shaping of our Baby Boomer generation from its post-War birth to its coming of age in the 1970s?

It's not just the tubular scrim or the lurid, changing colors or the rock/folk soundtrack that evokes the lava lamp. Even the figure inside the shaft, Miller himself, turns out to be as protean a shape-shifter as the bubbling plasma that so transfixed us in our misspent youth. In the course of just 100 minutes, he morphs into Elvis Presley, Winston Churchill, Jawarhalal Nehru, Janis Joplin, Richard Nixon, JFK, MLK, PET, LBJ, Malcolm X, Buddy Holly, the Fab Four (all rolled into one), Glenn Gould and many, many more.

Every word that is spoken, every note that is sung "comes out of my own mouth," Miller explains in a post-show talk. Nevertheless, his quick-change impersonations are bolstered by projected film clips and recorded sound samples that allow him to ape the gestures and track the voices of the people he portrays.

Full credit for this miraculous mirage must go to his production team: Composer/Sound Designer Chreighton Doanes, Set/Costume and Props Designer Yannik Larivée, Lighting Designer Bruno Matte and Projection Designer David Leclerc. Their work knits together so seamlessly that it's virtually impossible to apportion credit among them. They all seem to have long experience working together, often under the aegis of Canadian theatre titan Robert Lepage.

It's Miller's directorial precision, though, that moves it all along. He intercuts his characters and his fleeting micro-scenes with just the lightest of touches – a repeated word here or gesture there, a subtle shading of the spotlight hue, a costume detail. The show could all too easily have devolved into a pop music-fueled nostalgia piece, or a dog-whistling series of generation-specific in-jokes, or an earnest historical documentary.

But Miller is “not a historian,” according to his self-description. “I am a storyteller.” So against the backdrop of so many famous and not-so-famous personages, he knits together his whole 25 year panorama by tracking three recurrent characters from the Boom generation – a black American draftee who flees to Canada; a Vienna-born romantic who emigrates to Québec for its dual promise of pristine nature and dynamic modernism unravaged by war; and a suburban bobby-soxer who sheds her conservative upbringing to embrace the radical chic of Toronto’s student ghetto.

These people have their quirks and drolleries, but Miller cares too much about them to merely play them for gags. They’re loosely based on his own relatives. The Toronto woman, he admits, is a sort of composite of his mother and some aunts. The draft dodger recalls some of their old flames. And the Viennese reflects Miller’s own paternal ancestry, including a grandfather who’d been in Hitler Youth before converting, post-War, to a fervent fan of all things North American.

Depicting such a span of experience, the show provided plenty of emotional traction for the preponderant baby boomers in the audience. Greying (or balding) heads filled most of the house at the Arts Club’s Granville Island Stage, where the show runs as part of the PuSh festival through February 13th.

All the more striking, then, the contrast with the several rows occupied by a uniformed school group of 30-odd juniors from Stratford Hall Academy on Commercial Street, members of the Acting and Theatre Tech clubs. They watched respectfully, like well-mannered preppies, and seemed greatly impressed by the stagecraft and Miller’s performing chops.

But, chatting during the entr’acte, some of them sounded a bit vague about the historical background. “Maybe we’ll understand it better next year, as seniors, when we take up a Cold War unit,” one Taiwan-born student ventured to hope. Meanwhile, much of the action might have seemed as dated and as mystifying as a lava lamp.